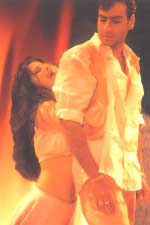 Pratima Agnihotri / fullhyd.com
EDITOR RATING
5.0
Performances
Script
Music/Soundtrack
Visuals
NA
NA
NA
NA
Suggestions
Can watch again
NA
Good for kids
NA
Good for dates
NA
Wait for OTT
NA
What is love? How is it defined? Want filmy answers? Deewane should be your best bet then. This film, a take off on any number of Madhuri Dixit superhits, especially Dil To Pagal Hai, Ham Apke Hain Kaun and Saajan, will tell you that the person with whom you dance the tackiest bare-dare sexy numbers that leave precious little to imagination, should be your life partner.

The story proves that knotty is the lovers' path when naughty are the lovers' ways. The film deals with a case of mistaken identity. Ajay Devgan, whose father, as is the case in Hindi films, was killed by goondas, sees rowdy-sheeters everywhere, and as a result is a much wanted police officer, both for the department and for the mischief-mongers. His childhood sweetheart Goodiya (Urmila Matondkar) dotes on him. Life is all hunky-dory. He goes to Simla for a conference where he catches a thief who, as it can happen only in Bollywood, is his exact look-alike. He returns to Bombay, and while he is telling the Police Commissioner about this chance encounter, he is shot by the criminals and goes in to a deep coma.

Being the great police officer that he is, mayhem is let loose in Mumbai. To check that, the Police Commissioner thinks of a plan that could shame Sidney Sheldon. The thief, loved by a small time singer whose devotion he does not understand, is brought to the city to fob off the baddies. Voila! There, in his avatar as the honest police officer, he meets his Sapna, that is the honest chap's Gudiya. Though she is supposed to be madly idolizing the honest chappy, she apparently cannot make out intuitively that all is not well on the love front.

Ajay, the police officer, soon gets well. His sharp eyes can see that something is missing. Both do a Devdas in their own ways, both continue with the impersonation to get to know whom she loves and whom she does not. A knotty problem indeed, more complicated than the traditional love knot. So finally who gets whom? Who performs the sacrifice so essential to Hindi films? What happens to Mahima Choudhary? And why are chachas such a curse? Watch Deewane to get your answers. And you might actually enjoy the way the film unravels the knots, because the songs are good, the narration is brisk enough to hold your attention, the comedy is enjoyable, the locales are lovely, and the acting is tolerable.

In short, the film is sure to have a good run. Be sure, though, that all this gloss, with no substance whatsoever, does not blind you to the way girls are depicted. To begin with, the heroine in this film can easily overshadow the baddies' vamp, who is less skimpily dressed and whose contribution to the fun is crazy one-liners. Our heroine can shame Helen when it comes to come-hither dances. Moreover, she confirms the status-quoist hardline that girls, brought up supposedly on a sta(p)le diet of Mills-n-Boons, may be winners in the real world, but in the reel world, they sadly lack any emotional intelligence.

ADVERTISEMENT
This page was tagged for
Deewane ajay devgan urmila images poster
Deewane hindi movie
Deewane reviews
release date
Ajay Devgan, Urmila Matondkar
Follow @fullhyderabad
Follow fullhyd.com on
About Hyderabad
The Hyderabad Community
Improve fullhyd.com
More
Our Other Local Guides
Our other sites
© Copyright 1999-2009 LRR Technologies (Hyderabad), Pvt Ltd. All rights reserved. fullhyd, fullhyderabad, Welcome To The Neighbourhood are trademarks of LRR Technologies (Hyderabad) Pvt Ltd. The textual, graphic, audio and audiovisual material in this site is protected by copyright law. You may not copy, distribute, or use this material except as necessary for your personal, non-commercial use. Any trademarks are the properties of their respective owners. More on Hyderabad, India. Jobs in Hyderabad.