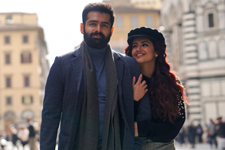 Anil Bandhakavi / fullhyd.com
EDITOR RATING
6.0
Performances
Script
Music/Soundtrack
Visuals
7.0
5.0
6.0
6.0
Suggestions
Can watch again
No
Good for kids
No
Good for dates
Yes
Wait to rent it
Yes
There is something enigmatic about the double-role. It reminds us of how strongly we associate a person's nature with their physical appearance. If we have a good experience with someone, the sight of them brings about a pleasant feeling, and even a glimpse of someone who has wronged us can lead to an avalanche of negative emotion. However, when two individuals look alike, we find ourselves in a perplexing situation, because our experiences with one of them may raise a set of unwarranted feelings about the other.

Ram Pothineni plays both Siddharth and Aditya in Red, a film directed by Kishore Tirumala (based on the Tamil thriller Thadam). Siddharth is a young and enterprising engineer turned businessman, who invests all his wealth and efforts into a construction project. While things are going well on the professional end, he meets Mahima (Malvika Sharma), and sparks fly as they get close to one another. Life is good for Siddharth.

Aditya is a gambling addict, who's a tough guy on the streets and makes his money through theft and low-level scams. When a close friend of his (Satya) gets caught up with some bad guys and has a week to pay them money he owes them, Aditya takes it upon himself to get his friend out of the situation.

A twist of fate brings Siddharth and Aditya together when they are both captured and brought in as suspects in the same homicide case being handled by Inspector Yamini (Nivetha Pethuraj). The case against Siddharth and Aditya is strong as photographic evidence shows that one of them was definitely present at the site of the killing. Investigators are led in multiple directions as the DNA evidence proves to be futile because it matches both the suspects. It is left to be seen who is truly behind the murder - Siddharth or Aditya - as the case unfolds.

Red could've done a lot more with the potential in the plot. The investigation ends up having too many unnecessary, and sometimes implausible, twists and turns, and the execution is poor. This leads to a second-half cluttered with revelations being thrown at you just to drag the film forward.

The story also fails to bring the most out of its cast. Ram Pothineni still holds his own as a lead portraying two personalities. Nivetha Pethuraj is competent in her character as Yamini, who plays a significant part once the investigation kicks off. Comedic relief is attempted but is bare, and the music does not manage to cover the gaps in entertainment value. In spite of all these deficiencies, the strength in the plot still manages to keep you in your seat - you just have to know which one of these lookalikes the assassin is.

The climax of the film is less than credible - after taking the story in a certain direction, the writers would not have had too many options left to conclude it in any other way - but is still satisfactory. Overall, the movie turns out to be an average experience, and falls behind the other box office hits this season. However, if the opportunity presents itself, and you find yourself to be ambivalent, Red warrants a watch.
Share. Save. Connect.
Tweet
RED (TELUGU) SNAPSHOT 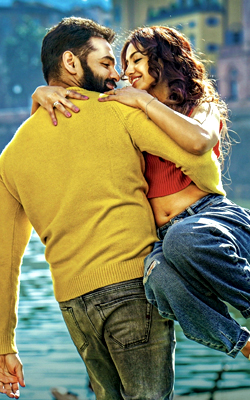 ADVERTISEMENT
This page was tagged for
Red (Telugu) telugu movie
Red (Telugu) reviews
release date
Ram Pothineni, Nivetha Pethuraj
theatres list
Follow @fullhyderabad
Follow fullhyd.com on
About Hyderabad
The Hyderabad Community
Improve fullhyd.com
More
Our Other Local Guides
Our other sites
© Copyright 1999-2009 LRR Technologies (Hyderabad), Pvt Ltd. All rights reserved. fullhyd, fullhyderabad, Welcome To The Neighbourhood are trademarks of LRR Technologies (Hyderabad) Pvt Ltd. The textual, graphic, audio and audiovisual material in this site is protected by copyright law. You may not copy, distribute, or use this material except as necessary for your personal, non-commercial use. Any trademarks are the properties of their respective owners. More on Hyderabad, India. Jobs in Hyderabad.