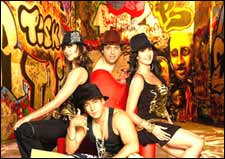 EDITOR RATING
7.0
Performances
Script
Music/Soundtrack
Visuals
NA
NA
NA
NA
Suggestions
Can watch again
NA
Good for kids
NA
Good for dates
NA
Wait to rent it
NA
Like almost everyone and his grandmother knows, Partner is a remake of Hitch, with Govinda in the role of Kevin James, Lara Dutta in the role of Eva Mendes, and Salman Khan in the role of Salman Khan. If that did not quite sound right, you probably forgot that this is Hyderabad, where a huge chunk of the population goes to watch Salman Khan and not the movie – and sometimes, despite the movie (even Lucky was a hit in Hyderabad).

Indeed, Partner works more because of the glossy starcast than the story or the comedy. This is not vintage David Dhawan slapstick, as will especially be noted by those sworn fans who think David Dhawan should really be listed in the dictionary - but every movie has a lot more content, detail and character than a few summary sentences in a review make it look like, and the film is certainly worth your while for an easy afternoon or evening, for all that it does have.

Prem (Salman Khan) is a Love Guru – he helps tongue-tied boys and men reinvent themselves to get their dreamgirls to fall in love with them (and also takes his shirt off several times in the process – it must somehow be important). However, even he throws his hands up when bumbling Bhaskar (Govinda), a financial advisor, approaches him for help in courting Priya (Katrina Kaif), the billionaire heiress he works for.

Bhaskar however doesn’t give up, hounding hapless Prem until he gives in. The synthetic collaboration still works, albeit in the contours of typical David Dhawan logic, and Priya falls in love with Bhaskar (and you need an Expression Guru’s help to figure that out – Katrina Kaif is so soulless, there is probably a programming language to operate her).

In the meantime, Prem himself flips for a peppery Naina (Lara Dutta), a reporter for a tabloid and a single mother behind whose tough façade is a vulnerable woman too scared to be in love anymore. She too reciprocates, but when she finds out Prem’s profession, she exposes him in venomous print as someone who helps cheat women. And this causes Priya to break up with Bhaskar too when she realizes Bhaskar tutored under Prem.

Salman Khan is perhaps the least energetic of Bollywood’s A-list, and he makes it look surprisingly good. While Govinda’s role has almost certainly tasted the scissors on the editing table in what is essentially Salman’s movie, the Khan still stands out in his own right as he acts nonchalant and cool in scenes that would have had Shah Rukh ricocheting frantically. His easy charisma carries the movie all the distance that the lack of the really hilarious frenzy you expected does not.

Govinda is expectedly hyperactive and unexpectedly well-dressed. Discontinuities and the lack of harmonious flow in the tale of his character suggest some less-than-purely-professional decisions made in the editing room, expected given his penchant to dwarf his co-stars. It’s clearly a second-fiddle role (did you ever know who played the parallel in Hitch?), but Govinda’s sheer screen presence and energy plug it as almost an equal, even if he doesn’t always have great lines.

Lara Dutta delivers what the role needs. Katrina Kaif does almost nothing, and you’re kind of grateful for it – she’s as wooden as she’s good-looking. Rajpal Yadav as an underworld don… alas, we’ve already spoilt it for you. And Haji Ali as Lara Dutta's son is quite impressive.

The music is pretty good, and Dhawan’s penchant for trendy sets and glitzy presentation, combined with the chic moves of Salman and the talent of Govinda in dancing, make the songs look even better than they sound.

The main flaw is the lack of consistently riotous dialogue – several times you’re expecting great repartee, and the lame lines get pretty disappointing. And of course, like with all David Dhawan films, you have to deposit your brain at the ticket counter before entering the theater.

For example, Govinda is supposed to be an IIM Ahmedabad graduate, and claims to be earning Rs. 30,000 per month. Nobody ever accused David Dhawan of researching his scripts thoroughly or basing them on real-life incidents.

But yes, Partner is a breezy entertainer even if mainly for sheer star-power and style, and makes for a fine weekend outing.
Share. Save. Connect.
Tweet
PARTNER SNAPSHOT

RATING
2
Sai on 7th Sep 2007, 2:33pm | Permalink
And it has three stars!!!!!!!!
RATING
2
Zeus on 24th Aug 2007, 6:23pm | Permalink
Leave your common-sense at home before you go for this movie. 'may be you'd like it. Else, mega crap.
RATING
4
Rahul on 9th Aug 2007, 4:51am | Permalink
Wats missing? Good GOD - its movies JUST LIKE THESE people that the rest of the world make fun of about Bollywood! This was such a terrible movie and Salman has acted the same since Judwaa - NO DIFFERENCE!! Forget abt leaving ur brain, but please leave ur self-respect, dignity, honor, humility, and everything decent when u go and watch this ridiculous shame of a "remake". Priya darshan wouldve done EONS better than Dhawan!
RATING
4
Hilarious on 2nd Aug 2007, 1:43am | Permalink
Katrina Kaif is so soulless, there is probably a programming language to operate her - lolol. That's y love this site!
RATING
10
David Dhawan on 30th Jul 2007, 8:00pm | Permalink
govinda rocks! sallu rocks!! the music rocks!!!

dont miss this one!

Kudos to the team.

ADVERTISEMENT
This page was tagged for
Partner hindi movie
Partner reviews
release date
Salman Khan, Govinda
theatres list
Follow @fullhyderabad
Follow fullhyd.com on
About Hyderabad
The Hyderabad Community
Improve fullhyd.com
More
Our Other Local Guides
Our other sites
© Copyright 1999-2009 LRR Technologies (Hyderabad), Pvt Ltd. All rights reserved. fullhyd, fullhyderabad, Welcome To The Neighbourhood are trademarks of LRR Technologies (Hyderabad) Pvt Ltd. The textual, graphic, audio and audiovisual material in this site is protected by copyright law. You may not copy, distribute, or use this material except as necessary for your personal, non-commercial use. Any trademarks are the properties of their respective owners. More on Hyderabad, India. Jobs in Hyderabad.