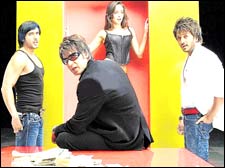 Then suddenly, the Dolby Surround Sound thunders awake; the ground beneath your feet begins to vibrate to decibel busting beats. Grooving stylishly and in sync are a bevy of young, energetic actors and extras. Yes, it looks like the beginning of director Sinha's previous Dus.

And it's not restricted to merely the beginning. All across Cash, Sinha uses the same formula, to the same attention-grabbing effect. Formula, in fact, is key to Cash; Sinha has engineered the movie with the same building blocks (including using many of the same actors) that made Dus (and incidentally, also made Dus a hit). Resultantly, Cash is very similar to its predecessor.

To begin with, and most obviously, Cash is also a "comic book thriller" (Sinha himself has described it as such in an interview; Cash is especially, er, "comic book" because it's big on animation) that has all things 'cool', which rev up its sex factor enormously. Racy bikes. Swanky cars. Vrooming speed-boats. Scenic foreign landscapes. Funky hairstyles. A smorgasbord of sunglasses. Long legs, made longer with mini-skirts. Bikini tops. Bikini-ed bottoms. Flat stomachs, emphasized with slinky chains. Hairless chests. Peppy music. And actors in daredevil character - rock-climbing, parachuting, para-sailing, and what-have-you.

Clearly then, Cash has style - oodles of it. Just like Dus. But when it comes substance, it has little to offer. Just like Dus. The plot is so feeble (made even more so because it is convoluted) that Esha Deol could crush it with one of her stilettos.

The story, set in Cape Town, South Africa, revolves around a gang of high-class thieves. Aditi (Dia Mirza) is one, hand-in-glove, and in love, with another, Angad (Suniel Shetty), a formerly jailed thief who wants to steal a priceless diamond. Then there is Karan / Doc (Ajay Devgan), a conman who could put Charles Sobhraj to shame, wanted as he is in 15 countries world-wide. Currently, he is living in with Shania (Shamita Shetty), a senior law-enforcer (with the loosest tongue ever) who is given the task of guarding the diamond.

Shania, for all her supposed cunning, has no idea that Karan is a criminal, or that he has hired three others - Lucky (Ritesh Deshmukh), Pooja (Esha Deol) and Danny (Zayed Khan) - on behalf of Aditi, to steal the same diamond. They are all awesome at what they do best, and they all try to outwit each other. But you have to watch Cash to know the winners from the losers.

Despite its vacuous razzmatazz, Cash is not a thorough lost cause, mostly because Sinha's skills as a director seem to have improved since Dus. The film has a lot going for it visually, musically (the songs are busting charts, and they are, predictably, shot stylishly - Sinha was a music video director of great repute) and acting-wise, too. Only, it seems to stop there.

Each actor does what is expected of him/her (though Ritesh, er, steals the show on more than one occasion). The girls look killer, shake a leg now-and-then, even kick some butt. The guys look slick, flex muscle, and make plenty of funnies. The dialogue is quite entertaining in places, especially in the exchanges between Shania and Karan.

All said, Cash is plenty of style, but unfortunately not as much substance. If you are looking for mindless timepass and promise not to regret it, this one can be fun for you.
Share. Save. Connect.
Tweet
CASH SNAPSHOT

ADVERTISEMENT
This page was tagged for
Cash Hindi Movie
Cash hindi movie
Cash reviews
release date
Ajay Devgan, Suniel Shetty
Follow @fullhyderabad
Follow fullhyd.com on
About Hyderabad
The Hyderabad Community
Improve fullhyd.com
More
Our Other Local Guides
Our other sites
© Copyright 1999-2009 LRR Technologies (Hyderabad), Pvt Ltd. All rights reserved. fullhyd, fullhyderabad, Welcome To The Neighbourhood are trademarks of LRR Technologies (Hyderabad) Pvt Ltd. The textual, graphic, audio and audiovisual material in this site is protected by copyright law. You may not copy, distribute, or use this material except as necessary for your personal, non-commercial use. Any trademarks are the properties of their respective owners. More on Hyderabad, India. Jobs in Hyderabad.