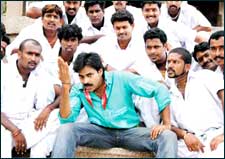 EDITOR RATING
3.0
Performances
Script
Music/Soundtrack
Visuals
NA
NA
NA
NA
Suggestions
Can watch again
NA
Good for kids
NA
Good for dates
NA
Wait to rent it
NA
There are bad movies, and there are bad movies. And then there are disasters. Bangaram makes all of them look good. One of the more thoughtless films to come out of the Telugu movie stables, this one is so supremely devoid of any soul, it makes you want to give some of yours to it, even if non-refundable.

Let’s get whatever story there is, out of the way first. Bangaram (Pavan Kalyan) gets fired from a TV channel by its MD for no fault of his, and decides to flatter the owner of the channel, Pedireddy (Mukesh Rishi), to get a recommendation letter to apply for the BBC.

Pedireddy is a Seema veteran, and when Bangaram lands up in Kurnool at his place, he decides to help Pedireddy’s daughter Sandhya (Meera Chopra), who is trying to escape her marriage to the brother of Bhooma Reddy (Ashutosh Rana), a factionist villian. Sandhya wants to run away to her beau Vinay (Raja) in Hyderabad, from where they’ll leave for the US, and Bangaram is trying save her from Bhooma Reddy in the process.

To start with, Bangaram is extremely monotonous. The main theme runs out by the first half, and all of the second half, Pavan is helping Meera escape, in a characterless charade of different sequences. It’s not like there’s something happening alongway, like chemistry building between the pair; the sequences are just what we said – characterless, discrete.

For the film to survive that, they would have to at least be innovative sequences. Alas, the movie has no intelligence either. Every time Pavan Kalyan gets into the stiffest of troubles, he beats up 20 sword-wielding Seema soldiers. He can do that for hours after he’s been brutally stabbed, he can break open the earth when he’s buried, and he can grant you three wishes. There is no cleverness in the script, almost anywhere. It’s like a Teja movie – when the hero is cornered, he becomes Superman.

Then, the film looks like it was directed by a novice who kept inserting things as he thought them up or as he looked up his checklist. So the climax suddenly has a kid being forced into marriage, and Pavan Kalyan being stabbed and still selflessly fighting, so as to bring in the melodramatic angle – something for the women, as they say in the interviews.

And of course, there's the violence. It makes the Taliban seem humane. In the absence of a great screenplay, the gore stands out in the movie. And the Seema factionism and violence theme, at the core of the film, is so worn out, it makes the wheel look like a new concept. And by the way, just how did those zillions of men clad in white dhotis, spilling out of Sumos and wielding hatchets, become fashionable in Tollywood? Give us Ram Gopal Varma’s gangsters any day.

In a big minus, the film doesn’t have a heroine and a lead pair romance – Sandhya is never interested in Bangaram (and neither is he in her), and finally marries Vinay anyway, and there’s no other female lead. Not having a lead pair romance is okay if you are making a social film with a theme people really associate with. For Bangaram, it seems stupid, and the movie simply doesn’t have anything to make up for that.

And finally, let’s not forget the length. You make a 180-minute movie with a story like this only if your target audience are people who are in coma.

The best part of Bangaram is, of course, the music. It’s hard for even Pavan Kalyan fans, however, to salvage this one based just on that.

Finally, Bangaram must be the first Telugu film – Indian film, perhaps, at least in the commercial genre – which has had the “Maakal…a” gaali get past the censors (camouflaged a bit, but it’s extremely clear for anyone who is not in a coma). Pavan Kalyan uses it recklessly in the climax. He is a big star who has so many young fans idolizing him, and his films are watched by so many people – what were the makers thinking, making him mouth that word? The censor board has some explanation to do.
Share. Save. Connect.
Tweet
BANGARAM SNAPSHOT

Anna who wrote this dialogue, it's the worst dialogue i ever heard in any movie.

I think Bangaram is a planned to demolish Pavan Kalyan's career in film industry.

RATING
2
Sivaji K on 6th May 2006, 7:42pm | Permalink
Its really disappointed all pawan kalyan fans.Mindless script, meaningless action sequences... Who would expect a telugu movie with out a female lead in it. Who needs such a high end contradictionary movies in telugu , People are waiting for just "good" entertainers but not movies like bangaram. Frankly speaking its not 24 karat bangaram, its a 0 karat drama with no stuff in it.All hype created around this movie before its release date, now its all gone to hell
RATING
4
Santaram on 6th May 2006, 4:11pm | Permalink
Hello! telugu producers! please open your eyes. Another disastrous given by tamil director. Please faith in telugu directors. Telugu director Puri Jagannath gave a super hit to Maheshbabu. Hello! Look and Listen me Chiru & Pavan Kalyan.
RATING
2
PAWAN KALYAN on 6th May 2006, 11:35am | Permalink
THPHU, IS THIS A MOVIE? THPHU.I'LL TELL YOU WHAT "THPHU" MEANS.Well, it means I'm spitting. Pawan perhaps might have said "maakal***a" to someone in the sets while shooting.Suddenly, the director might've felt that the gaali will catch up well with the masses. So, he must've included in his movie. And if at all it works( it should) bcoz, his fans idolize him come what may even if he scolds the press, behaves rudely .....etc.,
RATING
2
Sree Reddy on 6th May 2006, 6:30am | Permalink
Worst movie
RATING
2
1 - 15 OF 33 COMMENTS  |  NEXT  |  LAST
LEAVE A COMMENT
fullhyd.com has 700,000+ monthly visits. Tell Hyderabad what you feel about Bangaram!
MORE MOVIES
Latest Reviews
SR Kalyana Mandapam
Ippudu Kaaka Inkeppudu
Thimmarusu
Kadhanika
Shukra
more
Deyyam - 2021
Tempt Raja
Vakeel Saab
Wild Dog
Sulthan (Telugu)
Sulthan
Rang De (Telugu)
Saina
Aranya
Chaavu Kaburu Challaga
Contemporary Reviews
Seema Sastry
Mithya
Partner
Visakha Express
Yagnam
more
Thulasi
Cash
Sunday
Sundarakanda
National Treasure - Book Of ...
I Am Legend (Telugu)
Harry Potter And The Order O...
Don
I Am Legend (Hindi)
Random Reviews
Chaamundi
Akka Bavekkada?
The Tuxedo
Kalyana Ramudu
Aurat Ki Pyaas
more
Morning Walk
We Are Family
Vara Prasad & Potti Prasad
Killing Them Softly
Phata Poster Nikla Hero
Adavi Kachina Vennela
Malini & Co
Beauty And The Beast (2017)
Chi La Sow
Three Monkeys
SEARCH MOVIES
Dissatisfied with the results? Report a problem or error, or add a listing.
ADVERTISEMENT
SHOUTBOX!
{{todo.name}}
{{todo.date}}
[
ip{{todo.ip}}
]
{{ todo.summary }}... expand »
{{ todo.text }} « collapse
First  |  Prev  |   1   2  3  {{current_page-1}}  {{current_page}}  {{current_page+1}}  {{last_page-2}}  {{last_page-1}}  {{last_page}}   |  Next  |  Last
{{todos[0].name}}

ADVERTISEMENT
This page was tagged for
www.bangaram movie review.com
Bangaram movie review
bangaram movie details
bangaram telugu movie
bangaram full movie
Follow @fullhyderabad
Follow fullhyd.com on
About Hyderabad
The Hyderabad Community
Improve fullhyd.com
More
Our Other Local Guides
Our other sites
© Copyright 1999-2009 LRR Technologies (Hyderabad), Pvt Ltd. All rights reserved. fullhyd, fullhyderabad, Welcome To The Neighbourhood are trademarks of LRR Technologies (Hyderabad) Pvt Ltd. The textual, graphic, audio and audiovisual material in this site is protected by copyright law. You may not copy, distribute, or use this material except as necessary for your personal, non-commercial use. Any trademarks are the properties of their respective owners. More on Hyderabad, India. Jobs in Hyderabad.