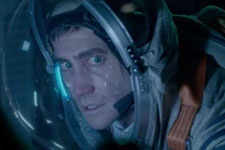 Vaishnavi Kulkarni / fullhyd.com
EDITOR RATING
7.5
Performances
Script
Music/Soundtrack
Visuals
7.0
6.0
7.5
8.0
Suggestions
Can watch again
No
Good for kids
No
Good for dates
No
Wait for OTT
No
Clinging to the coattails of household names in alien horror like Alien and Predator comes Life - a brainchild of director Daniel Espinosa, and a movie that envisions a terrifying possibility for the future of mankind's space explorations in a rather poorly executed way.

By simulating conditions of prehistoric Earth, Hugh manages to bring the isolated microorganism out of hibernation. Celebration ensues and the wee alien is named Calvin (they could have gone with Mars Menace 8000, but no, they name the first alien ever with the most unassuming name ever - go figure).

Hugh develops an unhealthy attachment to this miniature Venomous Tentacula, treating this potentially hostile alien life form like the child he never had. You just know the situation will get out of hand, and soon enough, it does - quite literally, when Calvin crushes all the bones in Hugh's hand and wields an electric wand like a practiced fencer to break free from the shackles of Firewall 1. Honestly, the alien is made up of ever-increasing cells that can individually perform every bodily function, literally "all brain, all muscle, all eyes" - what did these astronauts expect, a harmless kitten?

What follows is in equal parts horrifying, disgusting and thrilling. Like most horror movies, Life makes you want to scream at the characters for being so mind-numbingly stupid - and yet, despite how predictable the chain of events is, the film manages to keep you on the edge of your seat.

As Calvin not-so-Klein continues to wreak havoc on the ISS, various booby traps are laid in attempts to destroy this creature from hell, all ultimately foiled by bad luck and betrayals. With multiple gruesome deaths, the end begins to seem inevitable. A last-ditch attempt is then made to prevent Calvin from breaking Firewall 3 - i. e. to keep him away from Earth - and the final scenes admittedly give the movie a nail-biting finish. You can guess what is about to happen, but watch with bated breath to find out if your worst fears have come true.

The film is entertaining, with plenty of jump scares and close calls that turn you into a nervous wreck. It lacks substance, however - there is nothing that sets it apart from the other run-of-the-mill creature movies that Hollywood churns out. And it is a shame that the talented cast members this movie has aren't used to their full potential.

Ryan Reynolds does his fairly short role justice - his comic timing is as good as ever, and he lends a note of humour to the dark, sombre atmosphere inside the ISS. Gyllenhaal and Ferguson, on the other hand, fall rather short. Their chemistry and bond seems forced and unnatural, and Gyllenhaal is lacking in emotion and expression in his portrayal of the world-weary doctor. And Ferguson fails to display the courage and conviction of an astronaut in charge of maintaining firewalls on a deadly mission.

Bakare plays his part as Hugh well, making you feel sorry for him while simultaneously wanting to shoot him for being so blinded by the magnitude of their discovery that he puts all their lives in jeopardy. Dihovichnaya is adequate in her role as the mission leader. Sanada invokes your pity as the father of a newborn doomed to never lay eyes on his child.

The musical score suits the atmosphere of the film. While it doesn't stand out on its own, it adds to the mood of each scene and enhances the viewer's experience. The visuals of space are overwhelming and terrifying, emphasizing the insignificance of the six protagonists in their little container of metal in the gaping maw of deep space.

Life is neither a work of genius nor a milestone in its genre, but it is a fun watch for a lazy weekend night that does not take up much of your time - unless you spend hours wondering if this is what the future really holds, that is.
Share. Save. Connect.
Tweet
LIFE SNAPSHOT 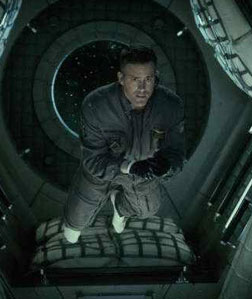 ADVERTISEMENT
This page was tagged for
Life english movie
Life reviews
release date
Hiroyuki Sanada, Ryan Reynolds
theatres list
Follow @fullhyderabad
Follow fullhyd.com on
About Hyderabad
The Hyderabad Community
Improve fullhyd.com
More
Our Other Local Guides
Our other sites
© Copyright 1999-2009 LRR Technologies (Hyderabad), Pvt Ltd. All rights reserved. fullhyd, fullhyderabad, Welcome To The Neighbourhood are trademarks of LRR Technologies (Hyderabad) Pvt Ltd. The textual, graphic, audio and audiovisual material in this site is protected by copyright law. You may not copy, distribute, or use this material except as necessary for your personal, non-commercial use. Any trademarks are the properties of their respective owners. More on Hyderabad, India. Jobs in Hyderabad.