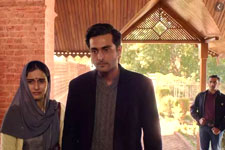 Neema Pramod / fullhyd.com
EDITOR RATING
6.5
Performances
Script
Music/Soundtrack
Visuals
7.0
5.0
6.0
8.0
Suggestions
Can watch again
No
Good for kids
No
Good for dates
Yes
Wait for OTT
No
Early on in Shikara, a meet-cute happens on the sets of a film. We will go into the details of this meet-cute soon, but before that we would like to draw your attention to the name of the movie that is being shot in this particular scene - "Love In Kashmir". We believe this should have been the title of the actual film too, for Shikara is indeed a love story with Kashmir and the exodus of Kashmiri Pandits from the state as its backdrop. The only problem being, it does not manage to be anything more.

Shiv (Aadil Khan) and Shanti (Sadiya) are the ones who meet-cute in the scene described above, when they are called upon to act as extras during the filming of a song sequence. The two of them are instantly captivated by each other, and soon they get married. Life is blissful for the couple, until the day they are forced to flee their home in Kashmir and live as refugees in their own country.

Shikara marks Vidhu Vinod Chopra's return as a director after five long years, and he has chosen to tell a very personal story. In fact, the female protagonist of Shikara has been named after his own mother Shanti Devi Chopra, who was also forced to leave Kashmir during the exodus and was never able to return until her death. Chopra has dedicated this film to his mother, and it is evident that he has crafted this work with a lot of love, with the help of his co-writers Rahul Pandita and Abhijat Joshi.

Undoubtedly, the love story of Shiv and Shanti is the strongest part of Shikara. Though old-fashioned, it is poetic and tender, and manages to warm the cockles of your heart with its simplicity. You end up really caring for these people, which automatically makes you want to reach out and protect them when they are in danger.

The movie's focus however is solely on this charming tale, which is both a good and a bad thing. Good, because it is nice to see such an endearing love story on screen after a long time. It is through Shiv and Shanti that we learn about the horrors of the exodus and its aftermath. We are with them when they begin their lives together. We are with them when communal hatred tears their lives apart and snatches away their near and dear ones. And we are there with them as they slowly rebuild their lives. They are our window into the lives of thousands of Kashmiri Pandits living as refugees in their own country, with no place to call home.

But that is exactly what works against Shikara, too. The unwavering focus on this couple results in the movie itself feeling one-sided. Though the film tries hard to stay neutral, it still ends up leaning towards one particular side. On one end, we have a shopkeeper refusing to accept money from Shiv as a mark of gratitude for teaching children in refugee camps. On another end, we have a person who is just "taking care of Shiv's house until his return to Kashmir", but has already painted the walls green to establish his identity and ownership over the place (no prizes for guessing the religions to which both of them belong). In a time as turbulent as this, this skewed perspective of looking at this issue just adds fuel to the fire already raging in the hearts of many.

However, the leads keep you watching. Both Aadil Khan and Sadia make confident debuts, with her showing slightly more promise than him. He is better as a middle-aged man than as a young poet, whereas she shines throughout. The two of them share a beautiful chemistry as well, which helps in smoothening the clichés and making them more palatable. They are ably supported by the rest of the cast, which also consists of about 4,000 actual refugees from Kashmir.

Visually, too, the film is a delight, with almost every frame feeling like a poem. Rangarajan Ramabadran's cinematography manages to capture Kashmir in all its glory. The songs are passable, but A R Rahman's score manages to inject melancholy into the scenes.

Though Shikara is not really fit to be called "the untold story of Kashmiri Pandits", it can still be watched for the tender love story it has in store. When you walk out of the movie, it won't be the struggle of Kashmiri Pandits that you will remember, but the scene where Shanti and Shiv read through the latter's thesis approval letter with so much joy that you feel their hearts might burst. If that sounds like your cup of chai, then this might just be the film for you.
Share. Save. Connect.
Tweet
SHIKARA SNAPSHOT 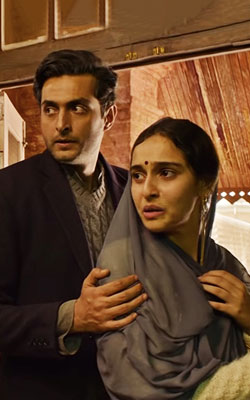 ADVERTISEMENT
This page was tagged for
Shikara hindi movie
Shikara reviews
release date
Aadil Khan, Sadia
theatres list
Follow @fullhyderabad
Follow fullhyd.com on
About Hyderabad
The Hyderabad Community
Improve fullhyd.com
More
Our Other Local Guides
Our other sites
© Copyright 1999-2009 LRR Technologies (Hyderabad), Pvt Ltd. All rights reserved. fullhyd, fullhyderabad, Welcome To The Neighbourhood are trademarks of LRR Technologies (Hyderabad) Pvt Ltd. The textual, graphic, audio and audiovisual material in this site is protected by copyright law. You may not copy, distribute, or use this material except as necessary for your personal, non-commercial use. Any trademarks are the properties of their respective owners. More on Hyderabad, India. Jobs in Hyderabad.