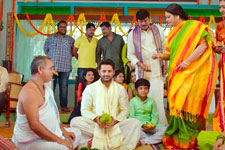 Veturi Sarma / fullhyd.com
EDITOR RATING
4.5
Performances
Script
Music/Soundtrack
Visuals
5.0
5.0
5.0
7.0
Suggestions
Can watch again
No
Good for kids
Yes
Good for dates
Yes
Wait to rent it
Yes
The film that I was constantly reminded of while watching Srinivasa Kalyanam was Nag Ashwin's debut movie Yevade Subrahmanyam. Both the movies want to prove a point so badly that they tend to get desperate, bully the other side into submission and suppress any voices of discordence even if they make sensible arguments at times. It is not the greatest of plot devices to make a point, and usually makes for tedious one-sided films.

Srinivasa Kalyanam is content to be one of those. It wants to uphold traditions and rituals surrounding the Hindu marriage in particular. For that to happen, Srinivasa Raju (Nithin), who works as a designer in Delhi while he is not lecturing people about his family members and their mutual love towards each other, promptly falls in love with Sridevi (Raashi Khanna). He wastes no time and tells her father RK (Prakash Raj) about their love, and the man who seems too exhausted to deny them (probably due to earlier films where he learnt it was always a losing cause) gives in easily.

However, being the consummate businessman that he is, RK wants Vasu to sign a pre-nup in case something goes wrong. Vasu agrees to that, and RK assumes that that has settled it and that the pair will let him attend to his businesses. Only, Vasu has other ideas - in exchange for the pre-nup, he wants RK to go through the whole 5-day ordeal of marriage that involves some 36 rituals. The rest of the movie shows RK waging a losing battle till he finally gives in to the passive aggression of the entire family, and realizes a thing or two about his wife, his other daughter's failed marriage, and the importance of rituals in general.

Satish Vegesna's effort suffers from multiple issues. For starters, the man is clearly in love with the movie's idea and the dialogues he came up with - he keeps repeating things all over again as if the audiences are not going to appreciate the awesomeness of his lines in one hearing.

Secondly, the huge extended family he creates is not one with unique characters with different idiosyncrasies and inhibitions like in an Addala movie, but moves as a single cohesive unit under a matriarch (Jayasudha). There may be a hundred characters at any given time in the film, but the voice is just hers. Essentially, the movie could have entirely done away with every one of the rest.

Then, everybody is generally so sweet to each other that it would be a surprise if they did not turn diabetic by the end of the film. There is no way any outsider wouldn't feel suffocated by their public displays of affection towards each other, and it all ironically makes you root for the bad guy - not that he's bad, but just that he wants to get on with it like most of us audiences do while watching the proceedings.

Nithin takes deadpan to a whole new level with his delivery. It is a flat performance all along, but in his defense there is not much any actor could have done with the lines that he is given without coming across as a bore, and he just about manages not to turn into one. Raashi Khanna's memo seems to be to stare longingly at any man who utters more than two lines of dialogue. Prakash Raj and Jayasudha are in opposite camps for a change, and they dominate everyone else whenever they are in the frame.

To the makers' credit, the whole thing is put together in a fairly competent manner, and so it's difficult to be too critical of them. The production is rich and glossy, so full of jewelry and silk sarees that you almost expect ads of Kalyan Jewellers or R S Brothers scrolling at the bottom of the screen. Sameer Reddy ensures that everything is bright and beautiful. However, the music, except for the beautiful title song, is largely inconsequential, with songs coming up as breaks from the dialogue-baazi.

Srinivasa Kalyanam has something both for the cynics and the believers, though not by design. The cynics can have a ball laughing out loud at the lectures and the characters' belief in all the traditions, while the believers will nod approvingly at the reaffirmations and the explanations offered. The best way to enjoy Srinivasa Kalyanam for the average person is to take everything it tells you with a pinch of salt. Reading "The Beginner's Guide To 36 Hindu Marriage Rituals" is not one of the primary reasons marriages work, but you could learn an amusing thing or two about the rituals that could lead to enthusisastic conversations with your friends.
Share. Save. Connect.
Tweet
SRINIVASA KALYANAM SNAPSHOT 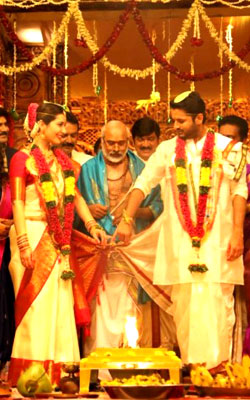 ADVERTISEMENT
This page was tagged for
Srinivasa Kalyanam telugu movie
Srinivasa Kalyanam reviews
release date
Nithin, Raashi Khanna
theatres list
Follow @fullhyderabad
Follow fullhyd.com on
About Hyderabad
The Hyderabad Community
Improve fullhyd.com
More
Our Other Local Guides
Our other sites
© Copyright 1999-2009 LRR Technologies (Hyderabad), Pvt Ltd. All rights reserved. fullhyd, fullhyderabad, Welcome To The Neighbourhood are trademarks of LRR Technologies (Hyderabad) Pvt Ltd. The textual, graphic, audio and audiovisual material in this site is protected by copyright law. You may not copy, distribute, or use this material except as necessary for your personal, non-commercial use. Any trademarks are the properties of their respective owners. More on Hyderabad, India. Jobs in Hyderabad.