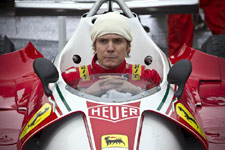 Nupur Barua / fullhyd.com
EDITOR RATING
7.0
Performances
Script
Music/Soundtrack
Visuals
8.0
7.0
7.0
7.0
Suggestions
Can watch again
Yes
Good for kids
No
Good for dates
Yes
Wait for OTT
No
Ron Howard and Brian Grazier have been business partners and friends since the early 1980s, and they are a formidable team in the world of entertainment. Almost all their movies have been critically acclaimed, and made huge profits. However, whenever they decide to present a biopic, of any sort, it is a foregone conclusion that it will be not only a success, but a cult classic. The recently released Rush has a long way to go before it can be considered a profitable movie, but of this you can be certain - it is not a film that you will forget easily, whether you understand Formula racing or not.

Rush is based on the real-life rivalry between celebrity car racers Niki Lauda and James Hunt. August 1, 1976, is the day that changed Niki Lauda's (Daniel Br?hl) life. He is at the German Grand Prix, and nothing fuels ambition more than competition. As he sizes up his fiercest rival James Hunt (Chris Hemsworth), he decides to be reckless and drive without thinking, like the latter.

The race ends with him in hospital, badly burned and with damaged lungs, while Hunt wins the event. This places Hunt closer to the Championship title that Lauda currently holds.

Now, cut to 1970. Rumoured to be good friends off the circuit and once roommates (a point not mentioned in the movie), Hunt and Lauda first lay eyes on each other at a Formula Three race. Hunt is a playboy, out to prove a point. His British parents disapprove of his choice in career, but he is confident that life in the fast lane is the only way to live.

Alcohol, women and drugs flow through his system like water - necessary, but never ruling him. His bohemian lifestyle is reflected in the way he drives, eager to make it to the Formula One league.

Lauda is more calculating. His Austrian father threatens to disown him if he insists on racing. Lauda calmly takes a loan, and buys his way into a team that will take him closer to the same league that Hunt is aiming at.

He is analytical and calm, and becomes difficult to ignore as a potential Formula One driver. As the two young men become more ambitious, their rivalry grows, and they become celebrities.

Back in 1976, Hunt, taking advantage of Lauda's absence, inches closer to the coveted title. What he does not expect is for Lauda to return to the Circuit within record time, battling to hold on to his title. The big day arrives, at the Japanese Grand Prix, as fans and media wait with bated breath for the outcome of this faceoff of sorts.

The lives of celebrity sportspeople are always dramatic, so a story that can be made into a movie is not an issue. Peter Morgan, the screenplay writer, takes all the high points that occur in the lives of Hunt and Lauda, and gives us a movie that is never short of adrenaline.

While Hunt is portrayed as a more colourful character, Lauda is depicted as a bit of an enigma, so arrogant that he is likeable. Hunt is brash, Lauda is practical. Most of the story is told from Lauda's point of view - he has a reluctant respect for Hunt, but is confident that he himself is a better driver than the Briton.

Both the characters have a love interest each, and, pretty predictably, Hunt divorces his wife less than two years after their marriage, while Lauda marries the only woman he loves.

Hunt is the party boy, the team player, while Lauda is a loner who goes home to bed early. Their contrasting lifestyles, though not shown explicitly, is the basis of their need to compete with each other, but soon they both realise that they are not so different after all.

For the non-F1 fan, the movie may seem like a series of races with not too much emotional drama in between to break the monotony, but it makes a point - all the drama, the emotions and the lives of Lauda and Hunt revolve around racing, and other aspects of their existence are not important enough. It is, after all, a sports movie.

The lead actors are the reason that this may turn out to be one of the most memorable sports biopics ever made. Chris Hemsworth, so much better without the Thor costume, is a revelation. He plays the debonair and charming, yet wild, James Hunt with an ease that will surprise you. His eyes speak volumes, and this may be his best work now, and in the future. Who knew that the on-screen Thor could be so intense in another role?

As for Daniel Br?hl, who plays the devoted son in Good Bye Lenin! - he becomes the cynical Lauda, the underdog whom you immediately relate to, and his aspirations become yours. When his common sense takes over and he becomes more interested in other hobbies, you breathe a sigh of relief, because, against all odds, you want Lauda to be the one who walks away with minimum pain. Br?hl delivers that man to you, without flinching.

Olivia Wilde and Alexandria Maria Lara play their roles with finesse, as do the other supporting cast members.

This is also a period movie, and the production and costume design are almost perfect. The cinematography gets a little gimmicky at times - it could have been grittier and slightly imperfect, to give you a feel of the 1970s. The music, by Hans Zimmer, is apt. Although the story does not move chronologically, the editing is not complicated, making it an easy movie to understand.

Today, the real James Hunt is no longer alive, and Niki Lauda is an author. One is never sure how these celebrities react when they see portions of their lives enacted on the big screen, but these two friends and foes will be glad to learn that Rush makes the audience respect the passion and love that they had for their sport. Watch Rush even if you dislike fast cars in general and F1 in particular.
Share. Save. Connect.
Tweet
RUSH (ENGLISH) SNAPSHOT 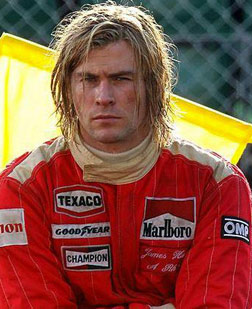 ADVERTISEMENT
This page was tagged for
Rush (English) english movie
Rush (English) reviews
release date
Chris Hemsworth, Daniel Br?hl
theatres list
Follow @fullhyderabad
Follow fullhyd.com on
About Hyderabad
The Hyderabad Community
Improve fullhyd.com
More
Our Other Local Guides
Our other sites
© Copyright 1999-2009 LRR Technologies (Hyderabad), Pvt Ltd. All rights reserved. fullhyd, fullhyderabad, Welcome To The Neighbourhood are trademarks of LRR Technologies (Hyderabad) Pvt Ltd. The textual, graphic, audio and audiovisual material in this site is protected by copyright law. You may not copy, distribute, or use this material except as necessary for your personal, non-commercial use. Any trademarks are the properties of their respective owners. More on Hyderabad, India. Jobs in Hyderabad.