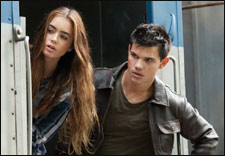 Deepa Garimella / fullhyd.com
EDITOR RATING
6.0
Performances
Script
Music/Soundtrack
Visuals
7.0
5.5
7.0
7.5
Suggestions
Can watch again
No
Good for kids
No
Good for dates
Yes
Wait to rent it
Yes
If you're a Hollywood purist, we have a problem here. However, if you're not a Hollywood purist, and have come to the movies to have some fun, you're likely to get your money's worth from Abduction.

Taylor Lautner, who stars as the second male lead in the Twilight series, is the protagonist of Abduction, and is quite believable in his role. Of course, if you are averse to Twilight and anything to do with the blockbuster teen vampire series, he won't impress you as much as he would like to.

The plot is a thriller, a Harry Potter-ish mix of exotic flashbacks, and teenage angst and loneliness. Lautner plays Nathan, a high-school student with several issues. He has a therapist (Sigourney Weaver), with whom he discusses disturbing dreams, anger problems, and his concerns about not feeling "connected" to things around him.

Soon he discovers that a strange, dark secret has been held from him all his life. And before he knows it, he is on the run, trying to save his life (and that of his cute neighbour Karen, played by Lily Collins) from a bunch of people he doesn't know. The CIA is also in this, and Nathan has no idea whom to trust.

The movie starts out being unapologetically teen-centric - a loud party, a bunch of classroom scenes, and a few hints of budding romance between Nathan and Karen. Why the makers had to be so elaborate about the details of this high-school life is a little puzzling, since there is a marked shift in the movie's tone the moment it becomes a CIA chase drama.

However, it can all be fun - yes, even the cheesy school bits - if you're up for it. The pacing of the plot is quite good, and the film is thrilling, even if it isn't the most intriguing plot you've come across. Some moments are A few lame dialogues here and there might make you cringe, but set your thresholds a little low and you will have fun. Some of the violence sequences are a bit long and can grate, though.

It's hard to say whether Taylor Lautner is a good actor. His character has to only either brood or smile, and wrestle a few people to the ground. Yet, this is a decent film in case you're a fan. Lily Collins comes across as warm and sweet, and Sigourney Weaver radiates warmth. Alfred Molina, who plays the CIA officer, is fun to have on screen.

In all, this one's a simple unpretentious thriller, and ending up watching it this weekend isn't a bad idea.
Share. Save. Connect.
Tweet
ABDUCTION SNAPSHOT

ADVERTISEMENT
This page was tagged for
Abduction english movie
Abduction reviews
release date
Taylor Lautner, Lily Collins
theatres list
Follow @fullhyderabad
Follow fullhyd.com on
About Hyderabad
The Hyderabad Community
Improve fullhyd.com
More
Our Other Local Guides
Our other sites
© Copyright 1999-2009 LRR Technologies (Hyderabad), Pvt Ltd. All rights reserved. fullhyd, fullhyderabad, Welcome To The Neighbourhood are trademarks of LRR Technologies (Hyderabad) Pvt Ltd. The textual, graphic, audio and audiovisual material in this site is protected by copyright law. You may not copy, distribute, or use this material except as necessary for your personal, non-commercial use. Any trademarks are the properties of their respective owners. More on Hyderabad, India. Jobs in Hyderabad.