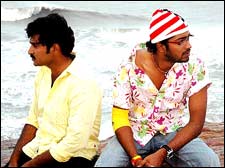 Strangely enough, the film has very little to do with its namesake train. Train No. 7016 steams in and out of the first scene of the movie, never to be seen again. In fact, you don't see a single train for the rest of the movie. It's sort of like calling Sholay Frontier Mail or something, just because there happened to be a train in it somewhere.

With that out of the way, we can delve into the story, because that is what Visakha Express promises to be all about. Raja (Rajiv Kanakala), a doctor with anger management issues, runs into Raja Ravi Varma (Allari Naresh) on a train to Vizag. Over a largish bottle of booze, the two men get talking, and it emerges that Raja lives with his alcoholic father Mohan Rao (Kota Sreenivasa Rao).

The father's drinking problem makes life difficult for Raja (angry neighbours, irate wine shop owner, the whole shebang), but pop just refuses to quit. One thing leads to another, and Mohana Rao is injured in an accident that leaves him immobilized and unable to talk, in the same hospital that Raja works in.

Raja injects his father with what he thinks is medicine, but actually turns out to be poison, and pop pops off promptly. All the circumstantial evidence points towards Raja being the murderer, and soon the long hands of law enforcement begin to reach out for him.

But there is a twist in the tale. Actually, there are so many twists in this tale that all the twisting and weaving may cause motion sickness. We'll leave you with just the first twist, and you figure out if it's your cup of cake (to mix metaphors).

Yes, it's a bit far-fetched. But if you suspend your critical faculties a teeny bit and go with the flow, Visakha Express will keep you engaged. It does drag in parts, particularly right in the beginning where a lot of time is spent on "developing the character" type cool filmy stuff, instead of getting on with the plot.

Rajiv Kanakala is decent, and oscillates nicely between being the angry but loving son, the angry and framed criminal, and the angry and indignant lover. Basically he is angry much of the time, is what we're getting at. Kota Sreenivasa Rao, like Visakha Express (the train), has a role only in the beginning, and is his usual competent self.

Ali plays an SI, and is supposed to provide the comedy angle, but it really doesn't work too well. The gentleman who plays his father-in-law who is the Circle Inspector, does a good job of being a menacing, bullet-headed bloodhound in khaki.

The revelation of Visakha Express is surely Naresh. Having gotten accustomed to seeing him play the part of the lovable, bumbling romantic in most (all?) of his movies, he really packs a punch as a psychopath. His brings a whiff of utter over-the-edge lunacy, and, partly because of the contrast with his usual roles, ends up spooking you quite effectively.

The women in the movie are mostly ornamental, though Preeti Jhangiani as Suchitra forms an important centre around which much of the second half revolves. The music is so-so, and a couple of the songs are very badly placed, and wreak havoc with the progression of the story.

Visakha Express could've used a slightly tighter storyline (in particular they should've left more suspense for the ending) and better editing, and also some reduction in duration. That being said, it's a more-than-bearable movie that will likely leave the audience satisfied (or close to it), if not ecstatic.
Share. Save. Connect.
Tweet
VISAKHA EXPRESS SNAPSHOT

See Visakha Express full details
VISAKHA EXPRESS USER REVIEWS
1 - 3 OF 3 COMMENTS
POSITIVE  |  NEGATIVE |  NEWEST  |  OLDEST  |  MOST HELPFUL  |  LEAST HELPFUL
USER RATING
5.7
14 USERS
Performances
Script
Music/Soundtrack
Visuals
NA
NA
NA
NA
Can watch again - NA
Good for kids - NA
Good for dates - NA
Wait for OTT - NA
Real Movielover on 9th Feb 2008, 1:01pm | Permalink
Mr. K KBS should be the ideal reviewer. all fullhyd.com reviewers should learn from such guys.
RATING
6
BR BR on 9th Feb 2008, 3:36am | Permalink
"Throw momma from the train " - Danny Devito
RATING
2
K KBS on 8th Feb 2008, 11:37pm | Permalink
Its a watered down version of Hitchcock's classic thriller -- 'Strangers on a Train'. The original, which was adapted from the Patricia Highsmith novel did not have any songs, and did not meander as much as this one does. More the pity! I mean, if you are into copying, why not do a good job of it? Considering that not a single reviewer had figured out that it borrows a lot (including the need to have a 'train' or something like it in the title), it wouldnt have hurt to make a frame by frame copy of the original. At least that would have ensured that Telugu movie-goers had a chance to watch a forgotten classic.
By the way, a couple of months ago, Strangers on a Train was adapted for the Hindi screen -- 'Strangers' (starring Jimmy Shergill). Just pointing out, as suddenly remembered that the forgotten classic is not forgotten by the directors.
And a note to the reviewer: Naresh did a psycho role earlier. Remember 'Nenu'? -- the remake (or was it a freemake??) of 'Kadhal Kondein'?

ADVERTISEMENT
This page was tagged for
VISAKHA EXPRESS MOVIE
Visakha Express telugu movie
Visakha Express reviews
release date
Rajiv Kanakala, Allari Naresh
Follow @fullhyderabad
Follow fullhyd.com on
About Hyderabad
The Hyderabad Community
Improve fullhyd.com
More
Our Other Local Guides
Our other sites
© Copyright 1999-2009 LRR Technologies (Hyderabad), Pvt Ltd. All rights reserved. fullhyd, fullhyderabad, Welcome To The Neighbourhood are trademarks of LRR Technologies (Hyderabad) Pvt Ltd. The textual, graphic, audio and audiovisual material in this site is protected by copyright law. You may not copy, distribute, or use this material except as necessary for your personal, non-commercial use. Any trademarks are the properties of their respective owners. More on Hyderabad, India. Jobs in Hyderabad.