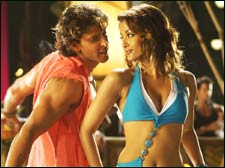 Anshumani Ruddra / fullhyd.com
EDITOR RATING
7.5
Performances
Script
Music/Soundtrack
Visuals
NA
NA
NA
NA
Suggestions
Can watch again
NA
Good for kids
NA
Good for dates
NA
Wait for OTT
NA
The Movie Sequel has finally arrived in India. And it's about time. With sequels being a big draw at the box office and also proving to be critical hits (Krrish and Lage Raho Munnabhai), it seems that they are here to stay. So it was the right time for Yash Raj Films to jump into the fray and bring out one of the most eagerly anticipated films of the year. And as luck would have it, with Dhoom 2, they haven't killed the chicken that lays golden eggs for them.

The tale first. Aryan (Hrithik Roshan, Mr. A) is a hi-tech gizmo-wielding thief who perpetrates heists around the world. His repertoire consists of a comprehensive mastery of all extreme sports (rollerblading, sand-boarding, jumping off cliffs with pretty girls), dance moves which could put Whacko Jacko to shame, and a chameleon-like ability to morph himself into the Queen or an old janitor or even Snow White's dwarf if the situation demands.

His aim: to leave his initials on the world. His next target: Mumbai.

In India he bumps into Sunehri (Aishwarya Rai), a small-time crook who offers him an unlikely partnership and more; hence the jumping off cliffs and the scintillating dance moves.

Enter ACP Jai Dixit (Abhishek Bachchan) and the cool-rider-dude-turned-cop Ali (Uday Chopra) from the first movie. Assisting them is ACP Shonali Bose (Bipasha Basu) - the resident expert on Mr A in the police department, and also an old college flame of Jai Dixit.

Three cops and two robbers - the old cat 'n' mouse game, or is it? More like Wile E Coyote dreaming up elaborate schemes to catch the Roadrunner. At times you are reminded of poor old Sisyphus pushing a huge rock up a hill till the end of eternity. The only solace for the cops is that they get to ride cool bikes (the mind boggles seeing Maharashtra Police Department cops riding around on bikes like the Suzuki GSX1300R Hayabusa).

The original Dhoom created a stir in Bollywood like no other action-comedy had in recent years. Its open-ended climax (with John Abraham's Kabir riding his bike off a cliff) led many to speculate that John Abraham will be walking around wearing a Hrithik Roshan mask (a la Mission Impossible) in Dhoom 2. Though that was not to be, some of these speculations do make for entertaining reading. (My favourite - John Abraham has a sex-change operation and comes back as Aishwarya Rai.)

Director Sanjay Gadhvi plays on all the strengths of the original and then adds more chutzpah in the form of a bigger star cast and the breathtaking locales of Rio de Janeiro and Durban, the expanses of the Namib Desert, the fortresses of Rajasthan and the backwaters of Goa.

Pritam's music is exhilarating and helps to move the story forward without being a hindrance, though one or two songs in the second half seem superfluous. Sameer's lyrics leave an indelible impression on the mind, and you often catch yourself humming along to the songs.

Bachchan Jr. cannot be denied his star status, even though he is yet to prove his mantle as an actor. An action-centric movie like Dhoom 2 is hardly a platform for a knockout performance, but it still pits him against a more versatile and refined actor in the form of Hrithik Roshan. Bachchan's acting limitations, barring a few electrifying moments, are clearly palpable as he stumbles his way through the movie in the shadow of Hrithik. Yes, make no mistake - Hrithik carries this movie all the way.

The ladies, Aishwarya Rai and Bipasha Basu, do no disservice to the film, and deliver exactly what is demanded of them in each frame - oodles and oodles of oomph. And as for Uday Chopra, the always-the-bridesmaid-never-the-bride does what he does best - walk around topless and crack one-liners, maybe in the hope of convincing older brother Aditya to make a Dhoom 3 with him in the starring role.

Speaking of Dhoom 3, here are my two cents - get an international hero like Jackie Chan and maybe a couple of Hollywood villains (Kevin Spacey comes to mind - hey, let a man dream!). For now, buckle up and enjoy the ride that is Dhoom 2.
Share. Save. Connect.
Tweet
DHOOM 2 SNAPSHOT

ADVERTISEMENT
This page was tagged for
Dhoom 2 full movie 2006 Hrithik Roshan
dhoom2 okpunjab.com
Www Dhoom 2 full movie download bollywood hritak roshan
dhoom 2 full movie okpunjab.com
dhoom 2 full movie download
Follow @fullhyderabad
Follow fullhyd.com on
About Hyderabad
The Hyderabad Community
Improve fullhyd.com
More
Our Other Local Guides
Our other sites
© Copyright 1999-2009 LRR Technologies (Hyderabad), Pvt Ltd. All rights reserved. fullhyd, fullhyderabad, Welcome To The Neighbourhood are trademarks of LRR Technologies (Hyderabad) Pvt Ltd. The textual, graphic, audio and audiovisual material in this site is protected by copyright law. You may not copy, distribute, or use this material except as necessary for your personal, non-commercial use. Any trademarks are the properties of their respective owners. More on Hyderabad, India. Jobs in Hyderabad.