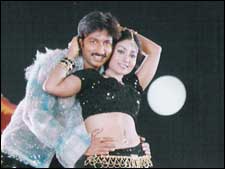 Mithun Verma / fullhyd.com
EDITOR RATING
6.0
Performances
Script
Music/Soundtrack
Visuals
NA
NA
NA
NA
Suggestions
Can watch again
NA
Good for kids
NA
Good for dates
NA
Wait for OTT
NA
This is unprecedented and, quite frankly, completely shocking. As a world authority in recognizing the importance of ear-hair, even the villain of this movie says that this is shocking. How can ear-haired factionalism and love go hand in hand? Maybe hair in hair, but not hand in hand.

This has never been seen in the Telugu industry before. Except for the 1,200 instances that come to mind, this concept is completely new. Like we said, totally unprecedented.

The seeds of love are sown very early in the movie. Even before all the factionalism. When you watch two kids, one, the servant's son, the other, the owner's, playing love games with each other, you don't expect them to grow up to be the hero and the heroine. That's a sensible thing, because you don't want the heroine to be someone's son.

And we're not that shocked to see that she's someone's daughter. That someone is one of the villains. The other villain is the guy who we already discussed about, you know, the guy who's a world authority in ear-hair. Both these guys are sworn factionalists and do everything that blood-hungry factionalists do, that is, act in movies.

Nah. These guys don't act. They don't have to. They look scary, anyway. So it happens that the hero (Gopichand) is a loyal henchman of one of them. He cares for his Reddy anna more than himself. That's why he falls in love with his daughter although knowing that it would really cheese-off the Reddy.

Meanwhile, both the villains are plotting to kill each other, kill the hero and the heroine, and kill the people with their accents. The makers have actually made sure not to make all these incidents look freakazoidal, and the sudden change of characters of these guys is fairly amusing.

But the best part of the film, and the reason why you should watch this is Prakash Raj. He plays the character of a sleazy, carefree policeman who's powerful, but let's his mind do the talking. This character of his will truly gets back all those disgruntled fans of his that were lost over the years.

The movie as such has nothing new to offer, but it isn't repulsive, either. The credit must go to some good performances and slick lack of yuck. Leave the heroine out of this, please. She did what she was hired to do.

We're not very sure if Gopichand will become a superstar after this, because one doesn't remember him after the movie. Maybe it was Prakash Raj's cameo. We're not sure, but one thing that we are very sure of is that this review ends here.
Share. Save. Connect.
Tweet
YAGNAM SNAPSHOT

ADVERTISEMENT
This page was tagged for
Yagnam
????? ?????? ????? ??????
yagnam movie Telugu
yagnam movie review
yagnam heroine hot
Follow @fullhyderabad
Follow fullhyd.com on
About Hyderabad
The Hyderabad Community
Improve fullhyd.com
More
Our Other Local Guides
Our other sites
© Copyright 1999-2009 LRR Technologies (Hyderabad), Pvt Ltd. All rights reserved. fullhyd, fullhyderabad, Welcome To The Neighbourhood are trademarks of LRR Technologies (Hyderabad) Pvt Ltd. The textual, graphic, audio and audiovisual material in this site is protected by copyright law. You may not copy, distribute, or use this material except as necessary for your personal, non-commercial use. Any trademarks are the properties of their respective owners. More on Hyderabad, India. Jobs in Hyderabad.