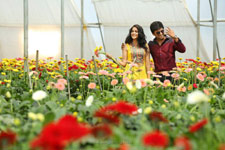 Ravi Kandala / fullhyd.com
EDITOR RATING
7.0
Performances
Script
Music/Soundtrack
Visuals
7.0
7.0
6.0
8.0
Suggestions
Can watch again
Yes
Good for kids
Yes
Good for dates
Yes
Wait to rent it
No
There are many movies where the hero has some handicap - psychological, physical or otherwise. We've seen directors milk this handicap for all its worth and making the hero cry like there's no tomorrow, and we've seen directors use this handicap for comedy. What we've typically seen, however, is the fact that this handicap is forgotten midway through the first half or the moment the hero gets into avenging mode. Bhale Bhale Magadivoy (BBM) does not make this mistake.

BBM has a hero who tends to forget and hence is considered unlucky by his parents. Ironically, he's named Lucky (Nani). Lucky is perfectly normal and focused until he's diverted. The moment he's diverted, he forgets whatever he was doing and moves on to the diversion like it was the most important thing in the world. This lands him in trouble with the father (Murali Sharma) of a prospective bride who he fails to meet twice in a row.

Meanwhile, Lucky meets Nandana (Lavanya Tripathi) and falls in love with her instantly. He keeps covering up his forgetfulness with some excuse or the other, and Nandana falls for him gradually. The twist in the tale comes when he realizes that Nandana is Murali Sharma's daughter.

Like we mentioned earlier, BBM does not take any shortcuts in depicting the hero's illness. The problem begins in Lucky's childhood and stays with him till the end of the movie without any signs of slowing down thereafter. The screenplay is filled with funny gags - all of which are organic and stem out of Lucky's problem or the situations caused by it. There are no parallel comedy tracks that take you away from the story or are there for the sake of being there. And this humour is what elevates the film.

Maruthi, him of the Ee Rojullo and Bus Stop notoriety, goes clean this time and he does it with élan. BBM is written well, and the screenplay is kept tight enough to not allow any boredom to creep in. Nani owns the character and is a treat to watch - he's funny, he knows it, and that works wonders for the self-deprecatory humour that the role requires. He does look like he's putting on a couple of chins too many, though, something that can and should be avoided.

Lavanya Tripathi does quite well when compared to the other North imports. Murali Sharma is a treat to watch, while Naresh and Kokila, playing Nani's parents, overact their guts out. The rest of the comedian gang including Praveen, Srinivasa Rao and Vennela Kishore support Nani ably.

The music is functional but the songs flow with the story and are picturized well. The visuals are top-notch and there is a Farhan Akthar-type sensibility to the interiors and costumes with an emphasis on the blues and yellows.

BBM is fresh and fun - there are several laugh-out-loud moments, and the best part is that you start laughing in anticipation of the gags and end up laughing through and after them. We called Yevade Subramanyam fresh and fun, too - clearly Nani is making the right choices. And this should be your first choice this weekend.
Share. Save. Connect.
Tweet
BALE BALE MAGADIVOY SNAPSHOT 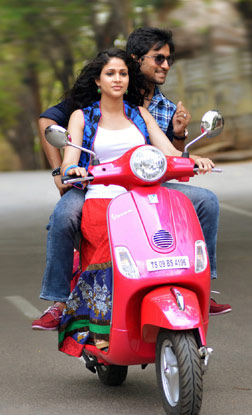 ADVERTISEMENT
This page was tagged for
Bale Bale Magadivoy telugu movie
Bale Bale Magadivoy reviews
release date
Nani, Lavanya Tripathi
theatres list
Follow @fullhyderabad
Follow fullhyd.com on
About Hyderabad
The Hyderabad Community
Improve fullhyd.com
More
Our Other Local Guides
Our other sites
© Copyright 1999-2009 LRR Technologies (Hyderabad), Pvt Ltd. All rights reserved. fullhyd, fullhyderabad, Welcome To The Neighbourhood are trademarks of LRR Technologies (Hyderabad) Pvt Ltd. The textual, graphic, audio and audiovisual material in this site is protected by copyright law. You may not copy, distribute, or use this material except as necessary for your personal, non-commercial use. Any trademarks are the properties of their respective owners. More on Hyderabad, India. Jobs in Hyderabad.