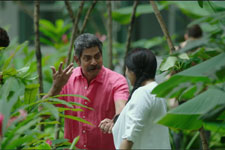 T J Reddy / fullhyd.com
EDITOR RATING
4.0
Performances
Script
Music/Soundtrack
Visuals
6.0
3.0
3.0
5.0
Suggestions
Can watch again
No
Good for kids
No
Good for dates
No
Wait to rent it
Yes
Jagapathi Babu's reinvention has always fascinated me. During my time as a young whipper-snapper, I lived in a house with aunts who swooned over his film roles and personality a la those women in the opening montage of Desamuduru. No one however can stay a heartthrob forever, and I was keen to see what the next chapter in his career would be. Would he turn an ageing actor clinging on to the image of his prime or would he choose to metamorphose into a character actor who added gravitas to the films he chose to appear in? And how would he manage to pull off whatever choice he made?

The man himself surprised us all after a brief hiatus from major motion pictures. He went home, reimagined his persona and came roaring back with a salt and pepper hair-beard combo. The move from the oft-unrewarding leading man roles to memorable villain/character actor roles has delivered, and how. His popularity has shot into the stratosphere as he has become the talk of Tollywood while rubbing shoulders with A-list talent, old and new.

The trailer for his newest venture Patel SIR, with a lone man sitting amidst a hoard of human carnage accompanied only by a little girl, brought back shades of one of 2017's better films, Logan. Jagapathi Babu as Logan? Hmm, many of us would pay good money to see that. Patel SIR, while not Logan, has a good enough theme - that of an "aravai yella, aaru adugula musaladu" exacting revenge on a bunch of men who took something very essential away from him and his trusty sidekick, the little girl.

Thus, we are back at it again with one of cinema's most overused narratives, Vigilante Justice. This form of storytelling is compelling when the proverbial unstoppable force meets the also proverbial immovable object. A good mix of action, character, motivations, plot and (essentially) redemptive violence drive these stories. However, Patel SIR drops the ball on many of these fronts. As a quick example, when the only event that threatens to stop the hero is a stroke and not any of the bad guy's evil schemes, the film has an irreparable problem, as it cannot create possibly an ounce of tension.

Indeed, when Jagapathi Babu, or JB as the film likes to christen him, says "Buddha Hoga Tera Baap" and goes after the bad guys like the Grim Reaper himself in Patel SIR, the sequences rarely, if ever, mean much in the grand scheme of things. The actors who portray the mean men do their acting efficiently (they've done this many times before), but their characters are extremely underwritten and unthreatening, and are hence no better than the many random henchmen JB beats up.

Posani Krishna Murali's comic timing and antics act as the only respite in a film aching for some levity. I have no qualms in praising Jagapathi Babu for his drama chops, either. He shoulders an otherwise flailing film incredibly well. His screen presence is magnetic, and coupled with his diction and the many subtle nuances in his mannerisms, gives the film plenty of chutzpah. But all of that is still not enough to pull the film out of the drudges of mediocrity.

Uninspired direction, poor CGI, ill-conceived scenes, overtly expository dialogue, a ridiculous timeline of events, clues to twists which are as subtle as gunshots and forgettable songs - the film has a myriad of problems. The constraints on the budget are understandable, but the lack of a quality script and sure-handed direction are not. If it wasn't for a genuinely heartfelt post-interval section, the movie would have been rated much lower.

Jagapathi Babu certainly has the talent to play an ageing action hero, but this film isn't the best showcase of his abilities. Hopefully his best is somewhere in the future, for he is ageing gracefully.
Share. Save. Connect.
Tweet
PATEL SIR SNAPSHOT 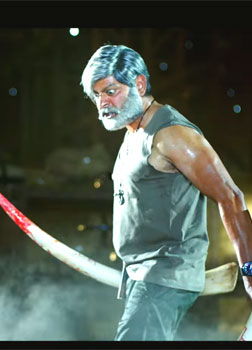 ADVERTISEMENT
This page was tagged for
Patel SIR telugu movie
Patel SIR reviews
release date
Jagapati Babu, Tanya Hope
theatres list
Follow @fullhyderabad
Follow fullhyd.com on
About Hyderabad
The Hyderabad Community
Improve fullhyd.com
More
Our Other Local Guides
Our other sites
© Copyright 1999-2009 LRR Technologies (Hyderabad), Pvt Ltd. All rights reserved. fullhyd, fullhyderabad, Welcome To The Neighbourhood are trademarks of LRR Technologies (Hyderabad) Pvt Ltd. The textual, graphic, audio and audiovisual material in this site is protected by copyright law. You may not copy, distribute, or use this material except as necessary for your personal, non-commercial use. Any trademarks are the properties of their respective owners. More on Hyderabad, India. Jobs in Hyderabad.