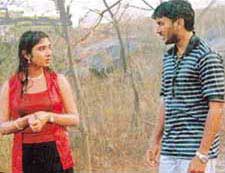 Ajay Bhashyam / fullhyd.com
EDITOR RATING
3.0
Performances
Script
Music/Soundtrack
Visuals
NA
NA
NA
NA
Suggestions
Can watch again
NA
Good for kids
NA
Good for dates
NA
Wait to rent it
NA
You know that the industry is low on inspiration when a director with a good theme in hand believes that the battle is already won, and that making the film is just a formality to get done with. And that is the moral of this tale - a good script is such a novelty in Tollywood that a director with one can forget such fundamentals of filmmaking that it is good films that work, not just bold scripts.

The story starts off in the college scene where Siddhu (Raja) and Sneha (Neelambari) meet. There's the usual motley college gang with each guy or girl having some 'special' distinguishing characteristic. And Sneha is a 'weird' girl who is very outspoken and has radical views on life and freedom.

The story really doesn't progress much beyond that for a long time. She and Siddhu share similar views on most other subjects, and he, of course, falls for her. He's trying and trying to take it a little further, and you look at your watch and see that it is almost interval time, and wait for the twist as desperately yourself now. It's a sad state of affairs for the movie industry when film after film share the same feature - drag along till the interval and pull along after that.

The admittedly 'different' twist is all Sneha's game - she wants to have Siddhu's child but doesn't want to be tied down by marriage. Huh? Anyway, now you rush out to get your popcorn or whatever wondering what's going to happen next. When you return, there is no sign of Sneha, and the usual college comedy is on. "What?" you ask yourself in disbelief!

It turns out that the intended child is already born; and the rest is very predictable with Sneha refusing to change her views about marriage and our man pining away. I don't think I have to tell you how it ends - it's in the name, and here's a nose up for the Bard.

The theme of Vechivunta... is admittedly innovative, but Sri Ram fails to make it realistic - the film lies in limbo every so often until its director keeps suddenly jerking to the reality that it isn't moving ahead. Raja is the epitome of unconvincing - he can't act to save his life. And he is really bad looking - he doesn't even have the usual excuse of 'unconventional good looks'. It isn't that heroes have to be good-looking, but this is way beyond it.

Neelambari is pretty and quite convincing as Sneha, and is the redeeming feature. The comedy track is laughable, and that's not funny. Most of the college jokes you get to see you would probably remember as straight out of Tinkle. The music is okay, and the picturization is also not bad. But all in all, this is a very amateurish production.
Share. Save. Connect.
Tweet
VECHIVUNTA SNAPSHOT

ADVERTISEMENT
This page was tagged for
telugu movie songs vechivunta movie song
about vechivunta telugu movie
Vechivunta telugu movie
Vechivunta reviews
release date
Follow @fullhyderabad
Follow fullhyd.com on
About Hyderabad
The Hyderabad Community
Improve fullhyd.com
More
Our Other Local Guides
Our other sites
© Copyright 1999-2009 LRR Technologies (Hyderabad), Pvt Ltd. All rights reserved. fullhyd, fullhyderabad, Welcome To The Neighbourhood are trademarks of LRR Technologies (Hyderabad) Pvt Ltd. The textual, graphic, audio and audiovisual material in this site is protected by copyright law. You may not copy, distribute, or use this material except as necessary for your personal, non-commercial use. Any trademarks are the properties of their respective owners. More on Hyderabad, India. Jobs in Hyderabad.