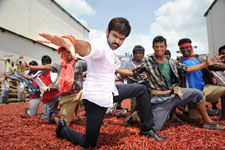 Kritika Deval / fullhyd.com
EDITOR RATING
6.0
Performances
Script
Music/Soundtrack
Visuals
7.5
5.5
6.0
7.0
Suggestions
Can watch again
NA
Good for kids
NA
Good for dates
NA
Wait for OTT
NA
There are two things you take away from Ongole Gitta - 1. The south Indian obsession with a fair complexion (the movie is named after the Tide-safed Ongole Bull, the hero is called White for most of the film, and there is a rather obsessive quality to just how much of the dialogue is about Ram's complexion), 2. The disturbing image of a naked Prakash Raj, his "modesty" only protected by pixelation, seen not once, not twice, but FOUR TIMES.

Well, these mostly unrelated observations apart, Ongole Gitta is a rather fun watch, except when the "romance" steps up. The first "formula" venture by "Bommarillu" Bhaskar, this flick deviates just enough to keep you interested until the end.

The backdrop of a red chilli farmers' market is an inspired choice for this tale of vendetta. The vendetta belongs to White (Ram), a worker at the Ongole mirchi yard, who has mysterious origins, and who is a constant pain in the chairman Aadikesavudu's (Prakash Raj) soon-to-be-naked behind.

Somehow contriving to get engaged to Aadikesavudu's daughter Sandhya (a shrill and insipid Kriti Kharbanda), White then goes on to spend a copious amount of time on what he would like to call playful courtship (the list of Telugu movies that would've stopped at about 10 minutes if only the heroine had filed a sexual harassment case against the "hero" is endless ).

Things get interesting once the scene shifts to White's flashback, in the village of Thikkaverripalli, a place where the residents are most certainly true to its name. There, we see that White ran away to get away from a hilariously overprotective father (Prabhu Ganeshan).

However, as White himself says often enough for you to not forget in haste, "nenu 10 maatalu chepthe daanilo 6 abadhdhalu, 4 nizaalu untaayi." ("If I tell you 10 things, you will find 6 lies and 4 truths among them.")

Why does White have it in for Aadikeshavudu? What part does White's father play in it all? How does one unmask a man who is determined to pretend to be good at all cost? These questions form the crux of the story.

While the plot by itself is pretty skinny, it is propped up by wonderful performances by Ram, Prakash Raj, Prabhu Ganeshan, Raghu Babu, Abhimanyu Singh, and pretty much everybody else.

Prakash Raj, as the good guy who keeps the beast hidden inside carefully, could have made for a tad more formidable antagonist, but he enjoys the role as much as he can, and that shows.

Ram's character is endowed many layers that usually aren't allotted to your average mass hero, and he does justice to every one of them, except when he is playfully molesting Kriti. Kriti, on the other hand, is the typical shrill and annoying bimbo, in a vast departure from the meaty female protagonists of Bhaskar's earlier films.

Abhimanyu Singh is hilarious as the frustrated and perpetual hostage of the wonderfully ornery people of Thikkaverripally.

The best of the film lies in its comedy, the vividness of its cinematography, and an action sequence that takes place entirely in the sugarcane fields of Thikkaverripalli, as a high-on-kallu Prabhu sings and dances in blissful ignorance in between the rows.

The camera work and the music add to the pungency of the local flavour that is diffused throughout the films. Apart from a couple of forgettable numbers, the music is uniformly catchy.

If mindless fun is what you're looking for, Ongole Gitta delivers in oodles. Go watch it with family or friends. Even if you won't be dying to repeat the experience, you will have had an enjoyable couple of hours.
Share. Save. Connect.
Tweet
ONGOLE GITTA SNAPSHOT 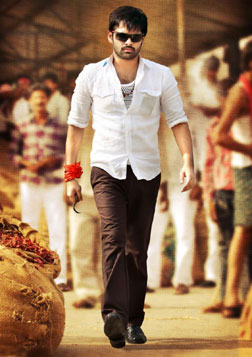 ADVERTISEMENT
This page was tagged for
Ongole Gitta telugu movie
Ongole Gitta reviews
release date
Ram, Kriti Kharbanda
theatres list
Follow @fullhyderabad
Follow fullhyd.com on
About Hyderabad
The Hyderabad Community
Improve fullhyd.com
More
Our Other Local Guides
Our other sites
© Copyright 1999-2009 LRR Technologies (Hyderabad), Pvt Ltd. All rights reserved. fullhyd, fullhyderabad, Welcome To The Neighbourhood are trademarks of LRR Technologies (Hyderabad) Pvt Ltd. The textual, graphic, audio and audiovisual material in this site is protected by copyright law. You may not copy, distribute, or use this material except as necessary for your personal, non-commercial use. Any trademarks are the properties of their respective owners. More on Hyderabad, India. Jobs in Hyderabad.