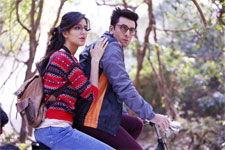 A lot happens in the first half. Jagga is an orphan. He rescues a man. Said man - called Tooti Footi (Saswata Chatterjee) - adopts him. They bond. Jagga stammers. Tooti Footi tells him he wouldn't stammer if he sang.Jagga now sings everything he has to say. All is well. But Tooti Footi has to leave.Jagga grows up in a boarding school. He (Ranbir Kapoor) solves mysteries in the neighbourhood.He helps a reporter (Katrina Kaif) investigating an illegal arms affair. His dad has gone incommunicado and he's possibly dead. It's up to Jagga to figure out what the hell is up with his dad.

And all of that is only what happens. Jagga Jasoos is more about how it happens. Anurag Basu decides that he shall not walk in a straight line when he can prance and also sing and dance.

Jagga Jasoos is a musical. People break into a song at the drop of a hat. So it isn't really meant to be realistic (realism is such an obscure concern when a teenager like Jagga looks like a 34-year-old Ranbir Kapoor and, well, Katrina Kaif is a competent journalist). Instead, what you expect and get out of Jagga Jasoos is a madly imaginative film.

The playful imagery (Ravi Varman on the lens), often bordering on the absurd, makes you gape at the audacity of it all. An ostrich lays an egg. A giraffe walks through a scene transition..A videotape intended to be blackmail material politely plays a birthday song.

The narrative (script by Basu and edited by Akiv Ali) is sometimes comic book, sometimes opera, and sometimes basic Bollywood. The film freezes time sometimes, and hurtles like a rogue elephant at others.

The actors embrace this outlandishness admirably. Kapoor is in top form - and Kaif is, too, simply by not sticking out awkwardly.And she continues to look like the dream she always has. Saswata Chatterjee seems a little iffy about the whole hyper-realism thing, but Saurabh Shukla kills it. As always.

And the music fills these ingenious spaces and acts making the film one organic whole.

Jagga Jasoos, in terms of world building, is better than anything made in Indian cinema so far. Yes, that includes Baahubali, Rangoon, Detective Byomkesh Bakshi, Robot and anything else you can think up. And it also helps that Anurag Basu, like the rest of the Bengali directors of Bollywood, treats Bengal as a muse that needs to be indulged. This film is atmospherically fabulous.

Which is why I was surprised - perplexed, in fact - when in the intermission I felt a tad unimpressed with the film. Somewhere something felt off. Maybe because it's got Katrina Kaif.
Or maybe because Anurag Basu's last outing (Barfi, which I had not watched) was partly plagiarised.
Why, this film itself takes a lot from too many films. For instance, Jagga's hairstyle is remarkably similar to that of Jim Carrey in Ace Ventura. Also, the poetic absurdity of it all reminded me of Wes Anderson's gleeful hyper-realism. But with Wes Anderson you wonder what he was smoking whereas with Basu you wonder what he was watching.

Or maybe because Basu, like other Indian directors attempting to make other worldly spectacle films, may have compromised on the story-telling in the process of the awe-inducing.

So during the intermission, in those moments of puzzlement, I accosted this smiling and bearded Muslim gentleman who bought his coffee after me and asked him, "Picture kaisi lagree?".
To which he replied that too many films nowadays made him sleep but this one wasn't. "Accha timepass," he declared, and plopped five sugar cubes in his coffee before he smiled once again and walked into the hall.

Perhaps that's what it takes. An appetite for five sugar cubes. An ability to be a child and summon that capacity to marvel and enjoy. There's just too much going on in Jagga Jasoos and, if you have the eye for it, too much to appreciate in every frame. It isn't a perfect film, but you can choose to focus on what it manages to be instead of what it could have been. 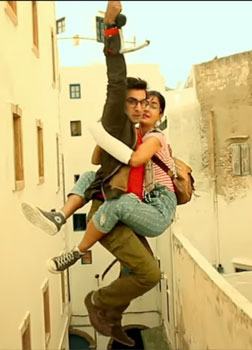 ADVERTISEMENT
This page was tagged for
Jagga Jasoos hindi movie
Jagga Jasoos reviews
release date
Ranbir Kapoor, Katrina Kaif
theatres list
Follow @fullhyderabad
Follow fullhyd.com on
About Hyderabad
The Hyderabad Community
Improve fullhyd.com
More
Our Other Local Guides
Our other sites
© Copyright 1999-2009 LRR Technologies (Hyderabad), Pvt Ltd. All rights reserved. fullhyd, fullhyderabad, Welcome To The Neighbourhood are trademarks of LRR Technologies (Hyderabad) Pvt Ltd. The textual, graphic, audio and audiovisual material in this site is protected by copyright law. You may not copy, distribute, or use this material except as necessary for your personal, non-commercial use. Any trademarks are the properties of their respective owners. More on Hyderabad, India. Jobs in Hyderabad.