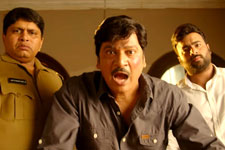 Raghav Venkat / fullhyd.com
EDITOR RATING
6.0
Performances
Script
Music/Soundtrack
Visuals
7.0
3.0
2.0
5.0
Suggestions
Can watch again
No
Good for kids
No
Good for dates
No
Wait to rent it
Yes
It wouldn't be an exaggeration to say that movie-going kids in the late 80s and early 90s went to sleep thinking that Rajasekhar was a police inspector in real life, too. Such were the number of roles he played as a police inspector. If the kids of today invest the same emotion and follow Nara Rohith's career closely, they, too, would perhaps go to sleep thinking that he is a police inspector in real life. Yes, he plays a cop in this movie, too.

The movie begins with the Krishna (Sudheer Kumar) visiting the Madhapur police station on a rainy night to lodge a complaint about a lost car. When a constable asks him for the value of the car, Krishna replies that not everything could be measured by money, but if he were to put a number anyway, it would be 5 crores.

In a matter of a minute and a few seconds, we are introduced to all the characters in the movie in a flash. And in what is a rare multi-starrer in the Telugu film industry, the heroes aren't given the typical heroic introductions. The way the movie flits between the characters, you are reminded of Vedam - the backstory of Karthick (Adi Saikumar) is in fact similar to that of Allu Arjun in that movie.

The characters include Sundeep Kishan (Sundeep Kishan) who always refers to himself as a hero and whose role is self-deprecatory in nature, making it a joy to watch; Uma Maheswar Rao aka Mahesh Babu (Rajendra Prasad) who is a mechanic in love with a widowed vegetable vendor, Bhanumati (Indraja); and Inspector Ranjith (Nara Rohith) who is the officer given the job of investigating the crime. The car is lost at a party in Provotel Hotel (maybe Novotel didn't want to associate themselves with the movie), and all the aforementioned characters (except Ranjith) are attending the party. So when the car is stolen, the suspicion falls on all of them. How Ranjith solves the mystery is what the second half of the movie all about.

Samantakamani is characterized by a whole lot of inspiration from many movies. For instance, Rajendra Prasad, Bhanumati and a car evoke memories of Baamma Maata Bangaru Baata. The thread of Adi Saikumar trying to impress upon his lover is reminiscent of Vedam. The names Uma Maheshwar Rao and Mahesh Babu and the situations around the names remind you of Ninnu Kori and Ashta Chemma. The movie plot and the way it proceeds for a long time reminds us of Express Raja. There is a reference even to Ankusam.

Also, while the film seems short and well-edited, it required a little more time to knit the story well. For example, Sudheer Babu's relationship with his father (Suman) and his step-mother could've done with a little more padding in terms of run time. However, the unraveling of the mystery towards the end leads to a few entertaining moments, and they ensure that the movie does not end up boring despite all the inspiration and all the déjà vu.

Nara Rohith seems to sleepwalk through his character. The pep in him is missing in this film. The characterisation of his role in this movie is similar to that in Rowdy Fellow, but that was a much better performance than this.

Adi Saikumar is back in a movie after a long time, and is a good choice for the role. His voice modulation makes him sound pretty similar to Ram Charan. Sundeep Kishan plays a character that the movie could've done without, but it doesn't jar the proceedings. As mentioned, his self-deprecatory role is a relief, and the dialogues make the people laugh.

Sudheer Babu has a serious role to play, and the brief to him seems to have been to look good. He does. And like Nara Rohith, he, too, sleepwalks through his role. Rajendra Prasad is a disappointment. Though the role demanded it, seeing him with garish makeup isn't what people are used. The more we seem of him in such roles, the more we feel he is wasting the fresh lease of life that he got with Julayi.

Though the movie is a multi-starrer, there aren't too many scenes with two of more of the main actors together. There is a jail scene that a majority of them are part of, but even then there isn't a single frame with all of them in it.

There are two songs in the movie - one for Adi and a party song in the hotel - and both are poorly scored. The graphics work is shoddy, too - post-Baahubali, such work in the department will not be condoned by the audiences. The cinematography, though, is top-notch.

All things said, the director Sriram Aditya still deserves credit for the things that do work. The scenes are interwoven well, and manage both to provide comic relief and keep the interest going in the main story. He doesn't give special prominence to any one character, and does justice to all of them. Heck, the car Samantakamani has an introduction scene and a back story as well! And as mentioned, the denouement is decent enough payoff.

Samantakamani isn't a film that will bring the audience to the cinemas in droves, and those that do turn up need to display patience and kindness towards it. 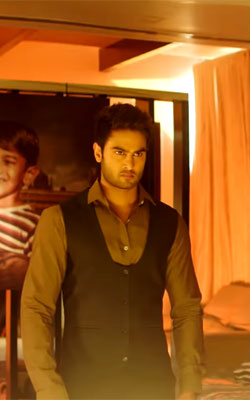 See Shamantakamani full details
SHAMANTAKAMANI USER REVIEWS
1 - 3 OF 3 COMMENTS
POSITIVE  |  NEGATIVE |  NEWEST  |  OLDEST  |  MOST HELPFUL  |  LEAST HELPFUL
Raghu M on 13th Nov 2017, 9:23am | Permalink
Just watched in TV. Thoroughly enjoyed. The review was too harsh. Much better than the crap releasing every week. I give 7+ rating.
Kanye on 25th Jul 2017, 2:38pm | Permalink
I watched this film having a feeling I was going to enjoy it. So I caught it on its second day of release, and, oh boy, did I enjoy it.

ADVERTISEMENT
This page was tagged for
shamantakamani full movie
shamantakamani telugu full movie online movierulz
Shamantakamani telugu movie
Shamantakamani reviews
release date
Follow @fullhyderabad
Follow fullhyd.com on
About Hyderabad
The Hyderabad Community
Improve fullhyd.com
More
Our Other Local Guides
Our other sites
© Copyright 1999-2009 LRR Technologies (Hyderabad), Pvt Ltd. All rights reserved. fullhyd, fullhyderabad, Welcome To The Neighbourhood are trademarks of LRR Technologies (Hyderabad) Pvt Ltd. The textual, graphic, audio and audiovisual material in this site is protected by copyright law. You may not copy, distribute, or use this material except as necessary for your personal, non-commercial use. Any trademarks are the properties of their respective owners. More on Hyderabad, India. Jobs in Hyderabad.