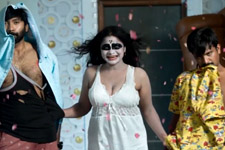 Anil Bandhakavi / fullhyd.com
EDITOR RATING
4.0
Performances
Script
Music/Soundtrack
Visuals
4.0
3.0
5.0
4.0
Suggestions
Can watch again
No
Good for kids
No
Good for dates
No
Wait to rent it
Yes
Tempt Raja is a Telugu adult-comedy directed by Veernala Rama Krishna Rao who also stars in the film as the lead. This is not a first-date movie. However, if you can pull off a film like this with your lady on a first date, then maybe, just maybe, she's the right person to be in a long-term relationship with - and you get to decide whether this statement is supposed to be a joke.

Krishna (Veernala Rama Krishna Rao) and his friend land up at a house with their girlfriends for a short stay over which each of them must prove that they are capable of pleasing a woman in bed. In the words of Krishna's girlfriend (Divya Rao), a woman must "test drive" her man before signing up for the sublime commitment of marriage.

The men are confident, as men usually are without any basis for the claim, that they'll have no trouble impressing the women. They even bring along a stock of Viagra pills to be extra safe. However, once they're at the house, the men repeatedly fail to deliver when it's time to go and leave their respective partners in a state of untapped lust. It turns out that there is a ghost lurking around, hunting for erections, and will finish off any man in the house that is aroused.

After being left high and dry on multiple occasions, the women decide to speak up against the "own-driving" that's happening in place of the "test driving". In a dramatic standoff, in which a woman in an A-grade film would demand that her man stand up for their love, the men in this flick are given an ultimatum in the form of an emotional monologue about a woman's sexual needs. Krishna and his friend must figure out a way to perform when the women are aroused and ready, and thus prove their manhood, or there is no point in going forward.

Tempt Raja is two hours of phallic obsession. Unlike lovemaking, you quickly realise that penile puns are only manageable for about ten minutes, unless you bring along a juvenile version of yourself revelling in the joys of your post-pubescent realisations. Not to deny that creativity can make anything fun for two hours, but it's hard - no pun intended - to say that this film stands tall - no pun intended, once again - in that regard.

Innuendo is squeezed for all that it can deliver as a concept by finishing off the genitalia jokes with visuals of shampoo being pumped out of a nozzle followed by the drowsy look that takes over a man's face post-coitus. In all fairness, if the act cannot be displayed in pornographic clarity, you break it down and convey it using props. Unfortunately, the film, understandably, does not reveal much action between the couples, except for a few tactless and forced French connections, which is probably sufficient to arouse the senses in our age of pornographic censorship.

One may scoff at the attempt to find a deeper message that could benefit society in a story that's not worthy of anything beyond lunchtime adolescent exchanges among men. But, to the movie's credit, between all the crass meta-humour inevitably referencing the idea of copulation, it finagles the emotional needs of a woman in the process of lovemaking and admonishes men against treating sex like just another masturbation session in which you also got lucky. Just for a split second at least, between the ape-like reactions to bananas being tossed around on screen, a man might stop and think, "Shit, that's right! The person I want to do this with every 43 seconds is a human with thoughts and feelings. I guess a good time means a good time for us both."

Let's not dwell on the performances too much - they are as cheesy as the dialogues. But when cheese is ordered, cheese is what you expect. Posani Krishna Murali makes a surprise entry in the second half and puts on a performance that's filled with so much conviction that you really want to sit with him off-screen and engage in some juvenile jokes over drinks.

The story itself is a haphazard sequence of ideas, devoid of much logic - possibly another meta-reference to one's irrational mind when in a state of arousal, or just what you must expect from a story that includes a scene in which they're invoking spirits using the mantra "spirit come".

Must you watch the film? A 108-minute phallic feast is a little excessive if you're a person of erect judgment. But then again, own-drive, test-drive or self-drive, drives vary from person to person. Ultimately, the balls are in your court.
Share. Save. Connect.
Tweet
TEMPT RAJA SNAPSHOT 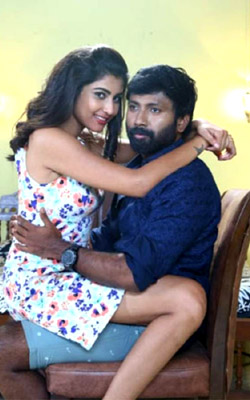 ADVERTISEMENT
This page was tagged for
tempt raja (2021) plot
atempt raja movie
tempt raja movie review and rating
tempt raja reviews
Tempt raja in movie rules
Follow @fullhyderabad
Follow fullhyd.com on
About Hyderabad
The Hyderabad Community
Improve fullhyd.com
More
Our Other Local Guides
Our other sites
© Copyright 1999-2009 LRR Technologies (Hyderabad), Pvt Ltd. All rights reserved. fullhyd, fullhyderabad, Welcome To The Neighbourhood are trademarks of LRR Technologies (Hyderabad) Pvt Ltd. The textual, graphic, audio and audiovisual material in this site is protected by copyright law. You may not copy, distribute, or use this material except as necessary for your personal, non-commercial use. Any trademarks are the properties of their respective owners. More on Hyderabad, India. Jobs in Hyderabad.