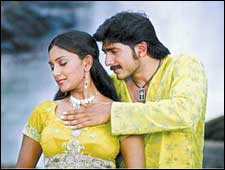 Himabindu Chitta / fullhyd.com
EDITOR RATING
3.0
Performances
Script
Music/Soundtrack
Visuals
NA
NA
NA
NA
Suggestions
Can watch again
NA
Good for kids
NA
Good for dates
NA
Wait for OTT
NA
Halfway through Kaadante Aunanile, you're likely to feel as proactive as a guy who's just realized that the gorgeous woman he's been successfully flirting a good hour now with, is actually a cross-dresser. The plot begins with some promise, but takes a twist so bizarre that the audience is left speechless. The moviemakers in utter desperation seem to have tried something new, no matter how illogical, in the name of originality.

Sindhu (Naveena) is a young, beautiful and cultured Indian girl who is stubbornly individualistic and determined to carve out her own place in the world. Raghu (Vamsi) is an American-born lad who has recently been transplanted to India. Though an initial misunderstanding antagonizes Sindhu against Raghu, this feeling soon gives way to friendship and affection.

The first half of the movie targets various socially relevant issues. Sindhu is an assertive woman, who fights for her rights in a consumer court and donates the money she gets to the CARE Foundation. A scathing attack is launched on 24-hour news channels and the abysmal lack of content in their telecasts. The unnecessary pressure on students to perform academically is criticized. Mildly sensible views are expressed on love and marriage.

Meanwhile, Sindhu and Raghu become close friends and Sindhu falls in love with him. She does not, however, think it necessary to confirm whether Raghu reciprocates her feelings. She confides in her parents, they give her their blessings, and all that remains is fixing a date for the wedding.

When Sindhu merrily informs Raghu that her parents approve of their match, the latter is stumped. He informs her that he is not in love with her and that she should get all ideas of marriage out of her head. Sindhu is angry and heartbroken. And this is where the movie altogether loses its way.

Where another girl would have moved on with life, Sindhu decides to fight for the man she loves. An admirable, gutsy move. Only, she files a case against him in court, on the grounds that his behavior aroused love within her and that he is therefore responsible for her heartbreak. As if that was not ridiculous enough a premise, the court actually admits the case, claiming that it will set a legal precedent for the youth of the nation. Yes, now you've seen it all.

Raghu defends himself along expected lines saying he was just being friendly and was misunderstood. He is reproached for hurting Sindhu's 'Indian sentiments', though it occurs to no one to reproach Sindhu for being presumptuous. And not once in the movie is it acknowledged that Sindhu was being a pompous ass when she filed the case.

Raghu takes it upon himself to find a suitable match for Sindhu, and Sindhu decides to stay in his house to make his task easier. This is another bizarre but convenient arrangement. Over a period of time, Sindhu tries to soften Raghu's heart, but in vain. Fate intervenes, however, and Sindhu ends up saving Raghu's life by giving mouth-to-mouth resuscitation. His gratitude turns to affection, and affection to love. This love reaches a crescendo when Sindhu is about to be engaged to another man. Nothing like some competition to make one realize that one is in love.

Yes, so logic is not the strong point of the movie, but the flick is high on drama and emotion. Some time is spent on characterization, though it is still difficult to understand how the ABCD Raghu lands up in India with no American accent and fits instantaneously into the Vizag college scene.

The performances are decent, with Suman appearing in a cameo as Raghu's father. The music is catchy, and is likely to become popular. The locations in Vizag and Kerala come as a welcome relief from the usual foreign locales. The one item number, as well as the item-girl who performs in it, are insufferable.

This film would have been far more tolerable if the court case had not been dragged into it. The role of Sindhu was supposedly a central and strong one, but all that comes across is as a spoilt brat who is fishing for importance.

Watch this one only if you are willing to ignore the obvious flaws in the plot.
Share. Save. Connect.
Tweet
KAADANTE AUNANILE SNAPSHOT

ADVERTISEMENT
This page was tagged for
Kaadante Aunanile telugu movie
Kaadante Aunanile reviews
release date
Naveena, Vamsi Krishna
theatres list
Follow @fullhyderabad
Follow fullhyd.com on
About Hyderabad
The Hyderabad Community
Improve fullhyd.com
More
Our Other Local Guides
Our other sites
© Copyright 1999-2009 LRR Technologies (Hyderabad), Pvt Ltd. All rights reserved. fullhyd, fullhyderabad, Welcome To The Neighbourhood are trademarks of LRR Technologies (Hyderabad) Pvt Ltd. The textual, graphic, audio and audiovisual material in this site is protected by copyright law. You may not copy, distribute, or use this material except as necessary for your personal, non-commercial use. Any trademarks are the properties of their respective owners. More on Hyderabad, India. Jobs in Hyderabad.