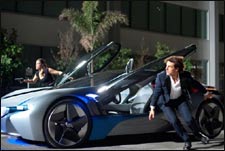 Samrat Sharma / fullhyd.com
EDITOR RATING
8.0
Performances
Script
Music/Soundtrack
Visuals
7.5
8.5
9.0
10.0
Suggestions
Can watch again
Yes
Good for kids
No
Good for dates
Yes
Wait for OTT
No
With a widely varying cast and tone, and completely different shifts in plot styles, the Mission Impossible films have always been about different directors trying to create the best possible action film out of a Tom Cruise starrer. This year, it is animation vet Brad Bird (The Incredibles, Ratatouille, and the phenomenal The Iron Giant) crafting his own blend of popcorn action around the Mission Impossible structure.

I can unequivocally say that Brad Bird is the best bet Tom Cruise and his co-producers have made in a long time - this is the best Mission Impossible film yet, and possibly the year's best Hollywood action film.

We see Cruise's Ethan Hunt escape a Moscow incarceration with a prison escape set to Dean Martin's "Ain't That A Kick In The Head", with the aid of Benji (Simon Pegg) and Jane (Paula Patton). They infiltrate and nearly destroy the Kremlin, and the plot gets weirder from there.

International terrorism and nuclear war are the stakes at play, and immediately, the ante is increasingly upped as the film relentlessly pursues visceral thrills after thrills, culminating in a bravura melee fight in a parking garage in India.

Along for the ride is a welcome Jeremy Renner, who acts as a foil both to Benji's neuroticism and Ethan's po-faced daredevilry. Good thing, too, as he brings a definition to his character that is far better than Ethan Hunt's. This is a cipher character that is brought to life with the sheer magnetism and charisma of Tom Cruise, and that is on full display here. He is every bit firing on full cylinders as he was in the first film 15 years ago.

Brad Bird likes to create strong female leads, and it is phenomenal in the way he builds Jane as a character. Using 3 extremely gifted actors (Josh Holloway, the inimitable Anil Kapoor, and French genius Lea Seydoux) to give her role heft, he creates a completely rounded character, who you root for more often than anyone else. Paula Patton adds a certain vulnerability to a straight-laced role, and the nuance elevates the film beyond the rote.

Possibly the best thing about the film, though, is the pacing. The relentless globe-trotting (Prague, Moscow, Dubai, Mumbai and a bit of Seattle) is punctuated with fun moments and great action sequences. The scenes shot in Dubai, especially, cannot be topped easily by any other film out there right now.

The action is always clean, crisp, and filled to the brim with visceral thrills - nary a shaky hand-held cam in sight. The geography of the action sequences is ably established as we sit on the edge of our seats watching a ride that is hard to top in pure fun. Little touches abound in every movie, and as light and fun as this film is, it will be hugely rewarding for multiple watches.

The relentless pursuit of action and great cinematic moments constructed around our crew means that there is hardly any time left to flesh out the bad guys. Elusive and shadowy as Michael Nyqvist makes his character, the final act shows a bit of weakness as there is no heft to his final fight.

ADVERTISEMENT
This page was tagged for
Mission Impossible - Ghost Protocol english movie
Mission Impossible - Ghost Protocol reviews
release date
Tom Cruise, Jeremy Renner
theatres list
Follow @fullhyderabad
Follow fullhyd.com on
About Hyderabad
The Hyderabad Community
Improve fullhyd.com
More
Our Other Local Guides
Our other sites
© Copyright 1999-2009 LRR Technologies (Hyderabad), Pvt Ltd. All rights reserved. fullhyd, fullhyderabad, Welcome To The Neighbourhood are trademarks of LRR Technologies (Hyderabad) Pvt Ltd. The textual, graphic, audio and audiovisual material in this site is protected by copyright law. You may not copy, distribute, or use this material except as necessary for your personal, non-commercial use. Any trademarks are the properties of their respective owners. More on Hyderabad, India. Jobs in Hyderabad.