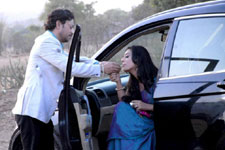 Nupur Barua / fullhyd.com
EDITOR RATING
6.0
Performances
Script
Music/Soundtrack
Visuals
7.0
7.0
5.0
6.0
Suggestions
Can watch again
Yes
Good for kids
No
Good for dates
Yes
Wait to rent it
No
If the first instalment (of what looks like something that is going to be a franchise) did not have an intriguing enough title, Tigmanshu Dhulia just took a step towards increased absurdity when he named his sequel Saheb Biwi Aur Gangster Returns. One is not too certain what this means, but the posters are enough to attract the audience that lauded the first film.

In case you have either (a) forgotten Saheb Biwi Aur Gangster, or, (b) not watched the former, the sequel begins with a gaudy montage of bullets, sofas, blingy stuff, and a few scenes from the first movie to bring you up to speed - then again, this may be a deliberate tool to enhance the decadence that exists in the area.

Chhoti Rani, whose name, we are told, is Madhvi (Mahie Gill), now holds the fort, and Saheb (Jimmy Sheirgill) is wheelchair-bound. Madhvi still pines, in vain, for her husband, and has become a raving alcoholic.

Saheb wants to marry Bunny (Raj Babbar) uncle's daughter Ranjana (Soha Ali Khan). He gets his stepmother to do the needful.

In the meantime, the young princess is in love with Inderjeet Singh (Irrfan Khan), popularly known as Raja Bhaiyya. He is the impoverished heir of a princely clan, and is dying for a sense of identity.

Then there is the political confusion in the region (Uttar Pradesh, broadly). Saheb has plenty of influence over politicians, cops and dacoits, so that pretty much occupies his thoughts as he is wheeled from one room to another. His wife, though a public figure, is seen as a puppet in his hands.

With the increased, incestuous relationships floating around, and the resentment that Saheb feels towards being forced to lead the life of a civilian, things can only lead to disasters and tragedies, and that is exactly what happens. Each person has to face the consequences of his or her misdemeanours.

To give Dhulia credit, the script is tight. Nothing is predictable. People switch loyalties quicker than they do television channels. And then switch back again.

What the makers have tried to do is take us into this world, largely north Indian, that pretty much exists even today - a world in which dethroned royal princes still like to lead the lives of their ancestors, where they influence politics but look down on politicians (treating them like servants), where killing is an art, and one's value is measured by the finesse he has achieved in this art. Dialogues are a delight, and with just the right amount of self-conscious comedy.

Certain aspects of the screenplay are a little off, though - maybe this seems prominent because of the high standard of writing overall. When did Saheb and his stepmother get so close? Where is Kanhaiya's daughter, if Kanhaiya is alive? Why was he not shown in the last shot of the previous movie? These overlooked details are jarring.

Also, when Ranjana goes through the photographs that Saheb has apparently taken of her, she comes across the same photograph that he fell in love with earlier (which is then obviously not his handiwork).

References to the various kingdoms and families are arbitrary. The characters say "UP" very often, but the clothes, architecture and even mannerisms seem more Rajasthani and Gujarati. As does the landscape.

In an effort to ascertain a certain pace, the director ends up with too many scenes of "serious" moments and discussions that are of no importance - if anything, they confuse the audience further.

Production design, if you ignore the fact that there is a bit of obscurity in the authenticity, is near perfect. Colours and locations are just right for the genre that this film belongs to. The makers have managed to incorporate the correct quantity and quality of dilapidation to make the debauchery believable. The costume design is suitable, if somewhat foppish for this day and age of realism. The cinematography is effective.

The movie belongs to Jimmy Sheirgill. He speaks more effectively with his eyes than the other characters do with their dialogues. He is brilliant. Irrfan Khan is not too bad either, but he gets repetitive.

Mahie Gill is slightly over-the-top with her rendition of an alcoholic wife. She staggers and slurs convincingly, but her dialogue delivery is incoherent. She has the same three expressions throughout.

Soha Ali Khan plays a role that fits her like a glove. She is a little insipid, though. The man of the moment is Rajeev Gupta, who plays the politician.

Raj Babbar underplays his role of concerned father and worried politician prince. And that is a relief.

What on earth are Anjana Sukhani and Mughda Godse doing as item girls, though? They look funny, and Mughda particularly seems to lack a sense of rhythm.

For those curious about how the characters in the first movie played out, Saheb Biwi Aur Gangster Returns is a must-watch. You will realise, after two hours or so, that a Part Three is inevitable. We can only hope that it will be released as soon as possible. This is Tigmanshu Dhulia at his bestâ€¦ almost.
Share. Save. Connect.
Tweet
SAHEB BIWI AUR GANGSTER... SNAPSHOT
SAHEB BIWI AUR GANGSTER RETURNS SNAPSHOT 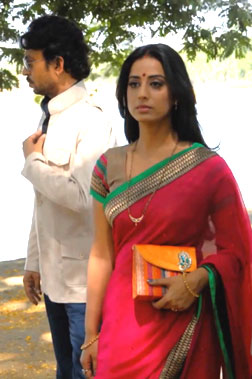 ADVERTISEMENT
This page was tagged for
Saheb Biwi Aur Gangster Returns hindi movie
Saheb Biwi Aur Gangster Returns reviews
release date
Jimmy Sheirgill, Mahie Gill
theatres list
Follow @fullhyderabad
Follow fullhyd.com on
About Hyderabad
The Hyderabad Community
Improve fullhyd.com
More
Our Other Local Guides
Our other sites
© Copyright 1999-2009 LRR Technologies (Hyderabad), Pvt Ltd. All rights reserved. fullhyd, fullhyderabad, Welcome To The Neighbourhood are trademarks of LRR Technologies (Hyderabad) Pvt Ltd. The textual, graphic, audio and audiovisual material in this site is protected by copyright law. You may not copy, distribute, or use this material except as necessary for your personal, non-commercial use. Any trademarks are the properties of their respective owners. More on Hyderabad, India. Jobs in Hyderabad.