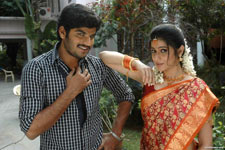 Kritika Deval / fullhyd.com
EDITOR RATING
3.0
Performances
Script
Music/Soundtrack
Visuals
3.0
1.0
4.5
3.0
Suggestions
Can watch again
No
Good for kids
No
Good for dates
No
Wait for OTT
No
So, two people in love take time getting there, and the love is all the deeper for the time taken. We all know that. What we didn't know or anticipate is that the time taken is because girls slow time down by their irresistible urge to go o-f-f i--n--t--o re---ve---rieeeeeeees. These take about 10 minutes in their heads and half-an-hour of real time apiece. Also, they involve facial contortions of the most convoluted sort. Most importantly, the girl needs a friend who causes things to happen in the couple's favour by virtue of the diabolical voices in her (the friend, i. e.) head.

This we learn from the story of Uma (Kashmira) and Dayanand (Dilip) as narrated by yet another voice, only from the outside, whom we shall henceforth refer to as The Outsider. He painstakingly sets up the background of our oh-so-pragmatic hero who has Goals and Dreams, and does things like lecturing his friends into breaking up amicably - an act that will probably get him slapped from two different sources in real life.

Then, The Outsider takes us to the home of Uma, who pouts prettily once every five minutes, whether or not that instance requires it. We are shown that she has a friend, whose invisible speech bubbles tell us of the harsh truths of life, like how falling in love eventually means tedium and boredom, even as she clairvoyantly tells the heroine about where and when she'll encounter the hero (although the movie is rather vague on this count, it is safe to assume that the friend machinated all these encounters - her whole demeanor smells of fish), following which meetings our heroine would fall into the aforementioned space-time bending trance-like state (more fish being smelt).

(In fact, we're pretty sure the friend is some sort of demonic cupid. So, we'll call her DC. Why are we typing all of this in parentheses? We don't quite know. We physically seem unable to delete them.) Following a series of events (heroine-approved stalking, autograph exchanges - this is how we know the story was written by someone whose youth expired in the '80s - begging for change to donate for a nameless orphanage, picking up a fallen person, introduction to a "big shot" at a "big company" neither of whom seem to have names) that seem to our poor unimaginative minds as being highly un-conducive to the activity of falling in love, our hero and heroine do exactly that, and mysterious deep at that.

And then, the same Outsider who spends untold millenia of our time telling us of the painstaking process with which two people reach soulmate-status, will now spend the rest of your time in bed-bug-planet of Sri Mayuri telling you that there is more to life by telling you love sucks by telling you girls suck by telling you boys suck... you get our drift. All that doesn't entirely suck comes under the dubious heading of Comic Relief, aka Ali and Venumadhav, neither of who have much to do with the rest of the tale.

As pointless as the film is, it is even more pointless to describe the calibre of our lead actors. They obviously had no choice but to look like mannequins hurtling joyously towards a speeding truck, the DC having done her work well. But, seriously, while Kashmira can get by on her looks and general cuteness, Dilip - who possesses neither qualities, as well as lacking the TQ (testosterone quotient) that seems to be a requirement for all Telugu movie heroes and the ability of - has his work cut out for him if he is to work on anything with more potential.

The production values live in that twilight zone between Telugu soap operas and low-budget films - a highly unpleasant experience, we assure you. The music, however, seems to have been freed of the taint of tedium that lines everything else about the film, and is actually quite pleasant.
Share. Save. Connect.
Tweet
LOVE LIFE SNAPSHOT

ADVERTISEMENT
This page was tagged for
Love Life telugu movie
Love Life reviews
release date
Dilip, Kashmira
theatres list
Follow @fullhyderabad
Follow fullhyd.com on
About Hyderabad
The Hyderabad Community
Improve fullhyd.com
More
Our Other Local Guides
Our other sites
© Copyright 1999-2009 LRR Technologies (Hyderabad), Pvt Ltd. All rights reserved. fullhyd, fullhyderabad, Welcome To The Neighbourhood are trademarks of LRR Technologies (Hyderabad) Pvt Ltd. The textual, graphic, audio and audiovisual material in this site is protected by copyright law. You may not copy, distribute, or use this material except as necessary for your personal, non-commercial use. Any trademarks are the properties of their respective owners. More on Hyderabad, India. Jobs in Hyderabad.