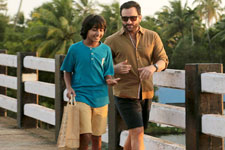 T J Reddy / fullhyd.com
EDITOR RATING
5.0
Performances
Script
Music/Soundtrack
Visuals
8.0
4.0
4.0
5.0
Suggestions
Can watch again
No
Good for kids
No
Good for dates
No
Wait for OTT
Yes
One of the primary complaints most moviegoers have is the lack of good snacking options at the cinemas. Try as they might, local multiplexes with their 5 flavours of popcorn and "wide" range of cuisine from the nachos (Doritos) of Latin America to the samosas of Indian streets can rarely satisfy the many foodies - who have been spoilt by choice - who frequent their establishments. I am one such soul who is so unsatisfied by cinema food that I'd much rather save my money and use it to buy the tickets to the next new release.

Unlike for most films, I went into Chef with a solitary expectation. And unlike my many film-going experiences, I wanted to buy something to eat from the concessions stand. My only caveat being, the food showcased in the film had to be so mouth-watering and easy on the eye that I would gorge on those nachos by tricking my mind into thinking that the scrumptiousness of the food shown on screen could substitute for their taste-bud-burning blandness.

Sadly, what I got on screen was a Rotzza. While most of you will be able to decipher what a Rotzza could be (if you've eaten the equally uninspired Birizza) and infer the quality of the film through it, to all the others who can't, please read on.

Chef, based on Jon Favreau's quiet and personal 2014 film which was sandwiched between Cowboys And Aliens and The Jungle Book, follows the story of Roshan Kalra. A customer-punching, son-ignoring, wife-estranging man with an inexplicably short fuse that the film inexplicably wants its audience to connect to with the least bit of setup. After clocking a reasonable man in the jaw for criticizing his work, Roshan is future endeavoured. Heeding the advice of his co-worker, he takes this as an opportunity to reconnect with his son by visiting his ex-wife's picturesque abode in Cochin. As a next set of you may have guessed, the 90 minutes of runtime following this 20 minutes of setup is dedicated to Roshan's son Armaan working with his old man helping to exorcize his (Roshan's) demons while rekindling his passion for cooking.

Simple premises like this one sometimes make for minimalistic yet deeply fulfilling films. But Chef the film, unlike its lead character, is not worthy of its three Michelin Stars. To use the movie's Masterchef jokes against it, it takes a lean breast of chicken and gazes at it with intent for the longest time, admiring its simplistic protein-filled potential. Suddenly, however, the movie realizes that all of its adoring gazes have come to nought as it has yet to properly marinate and eventually cook the fine dish that breast of chicken had the potential of being.

So in a very limited amount of time, the film attempts to achieve this unenviable task with a weird set of forgotten sub-plots and under-cooked characters that are specifically designed to appeal to the primal and not the cerebral. The resulting dish is tender and heartfelt in parts, while being cold, curt and rushed in others. Don't you dare make the mistake of criticizing Roshan K, though - you might be in for a beating.

Bursting onto the seams and scenes with his surprisingly appealing dad-bod and dad jokes (playing it Saif... okay, I'm sorry) is star Saif Ali Khan. In between talking about his nose for food and chronicling his struggles on the streets after eloping with his one true love - food - the other Khan creates a character most of us have seen a million times before but never tire of. Again, he appeals to the primal and not the cerebral. He is a troubled man who rarely realizes what's best for him but knows the value of a good day's work. He is man who teaches his child lessons in territories most modern parents are terrified to venture into. While he is a complete numbskull when it comes to growing and evolving personally (every single one of his decisions is made for him), Khan infuses the character with enough of his personality, ease in front of the camera and Dil Chahta Hai-inspired inside jokes to keep the audience hooked to his arc of redemption.

Raghu Dixit's and Armaan Malik's surpising ineptitude at the music department is unassumingly compensated for by Padmapriya Janakiraman and Svar Kamble. With an understated performance conveying depth and emotion through her deep eyes, the utterly gorgeous Janakiraman acts as the anti-thesis to many a modern leading lady. Her calm demeanour, a product of the many lessons life taught her, acts as the offset Roshan's character requires.

My only hope for Svar Kamble is that he doesn't go down the Darsheel Safary route by starring in needless child-oriented films as this young man has some real talent that can be mined by some good filmmakers.

Talking about mining some potential, notice how I have rarely if ever spoken about the primary prop of the film - food. The movie's palpable insincerity comes from the fact that it is rarely focused on its food and showcasing Roshan's talents. He chops a few onions, kneads some bread and makes some spaghetti, but Roshan's Michelin Star-winning brain refuses to come up with delectable dishes that would be devoured by your eyes.

The two reasons I can come up for this glaring omission are, one, the film is unsure if it wants to be a celebration of all things food or a celebration of all things Khan the actor can bring to a film; and two, the unfocused camerawork that focuses only sparingly on the food at hand. Be it Roshan's childhood favourite Chandni Chowk Ke Chole Bhature or the second coming of culinary passion, the Rotzza, the movie brushes Roshan's and his crew's culinary achievements to the side nonchalantly.

This creates a discord. The movie can stuff montage after montage of Roshan working with his son, but without seeing them explore the culinary world together by cutting, slicing, flambéing, sautéing, dicing, frying and so forth, you cannot get invested in their attachment and growth. When the film cannot be bothered to have its characters earn their arcs, it seems a tad ambitious to want to make the audience care about the story it has to tell.

After watching the original Chef, I made it a point to learn the name of the man who was responsible for those stunning dishes. Tasting chef Roy Choi's food has been a specific goal on my bucket list ever since. Even though this film dropped the names of the chefs who masterminded the dishes in it, I couldn't care less about remembering their names as I walked out of the cinema.
Share. Save. Connect.
Tweet
CHEF SNAPSHOT 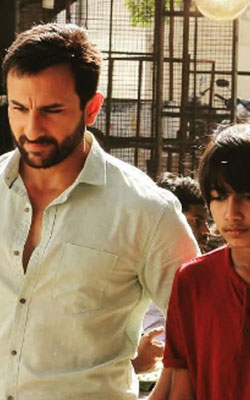 ADVERTISEMENT
This page was tagged for
Chef hindi movie
Chef reviews
release date
Saif Ali Khan, Padmapriya Janakiraman
theatres list
Follow @fullhyderabad
Follow fullhyd.com on
About Hyderabad
The Hyderabad Community
Improve fullhyd.com
More
Our Other Local Guides
Our other sites
© Copyright 1999-2009 LRR Technologies (Hyderabad), Pvt Ltd. All rights reserved. fullhyd, fullhyderabad, Welcome To The Neighbourhood are trademarks of LRR Technologies (Hyderabad) Pvt Ltd. The textual, graphic, audio and audiovisual material in this site is protected by copyright law. You may not copy, distribute, or use this material except as necessary for your personal, non-commercial use. Any trademarks are the properties of their respective owners. More on Hyderabad, India. Jobs in Hyderabad.