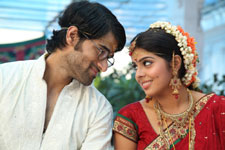 Pranita Jonnalagedda / fullhyd.com
EDITOR RATING
3.5
Performances
Script
Music/Soundtrack
Visuals
4.0
3.5
5.0
5.0
Suggestions
Can watch again
No
Good for kids
No
Good for dates
No
Wait for OTT
No
Filmmakers whipping up college movies with plenty of vulgarity is something we have constantly been seeing for some time now. But Maruthi's new production goes one step further, inducing this very vulgarity between a wife and a husband.

Love You Bangaram takes us into the life of a married couple, where the husband, Aakash (Rahul Rajiv), is "possessive", "insecure", and "crazy" about his wife, Meenakshi (Shravya). They relocate from Vizag to Hyderabad as soon as they elope and get married. Meenakshi, or Nanu, as her husband calls her, joins a software firm to kill her boredom. It is now that her husband's insecurity and possessiveness come to the fore, and he constantly keeps suspecting her of cheating on him.

But in the midst of all this, Nanu falls off from the window of a building. So to know when, how and why all this happens, one would have to watch this film. And that is what we wouldn't suggest that you do. Some things are best left unsaid, and so is the rest of this film. But sadly, the part that we can't reveal is the only part in the whole movie that is kind of interesting.

The director, in his attempt to cater his film to the IT crowd, has put in so many cliches that it seems so unreal. Where do you find an office full of sex-starved people and a lady who distributes sweets on her "divorce day"?

So what went wrong? There is a thin line between sexy and vulgar. While there is nothing wrong in accentuating a woman's flattering attributes, going over the top makes the entire effort look trashy. However, in spite of a beautiful smile and a lovely face, the character Meenakshi makes you want to turn away your eyes in embarassment.

And although director Govi wanted to restrict the suspense and fun parts to the end, he didn't realise how flawed his idea was. That single error in his judgement made this film the mass of confusion that it is.

The second half picks up pace towards the end, and by that time, you are already regretting even deciding to watch the film.

Both the lead characters have a kind of depth that can be conveyed only through strong performances. Though Rahul and Shravya give their best, there is this constant lurking feeling of something lacking, throughout the film. The insufficiency shows when Rahul "tries" to be passionate, or when Shravya tries to be confident (that's how her character is described). The rest of the cast will be forgotten as soon as you come out of the theatre.

The cinematography, editing and music are passable.

Watch this this film only if you have a taste for the risqué, and for the double-entendre genre of films. Otherwise, miss it.
Share. Save. Connect.
Tweet
LOVE YOU BANGARAM SNAPSHOT 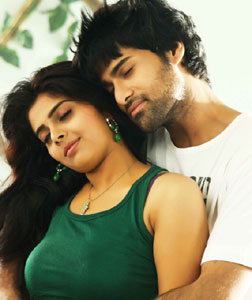 ADVERTISEMENT
This page was tagged for
Love You Bangaram telugu movie
Love You Bangaram reviews
release date
Rahul, Rajeev
theatres list
Follow @fullhyderabad
Follow fullhyd.com on
About Hyderabad
The Hyderabad Community
Improve fullhyd.com
More
Our Other Local Guides
Our other sites
© Copyright 1999-2009 LRR Technologies (Hyderabad), Pvt Ltd. All rights reserved. fullhyd, fullhyderabad, Welcome To The Neighbourhood are trademarks of LRR Technologies (Hyderabad) Pvt Ltd. The textual, graphic, audio and audiovisual material in this site is protected by copyright law. You may not copy, distribute, or use this material except as necessary for your personal, non-commercial use. Any trademarks are the properties of their respective owners. More on Hyderabad, India. Jobs in Hyderabad.