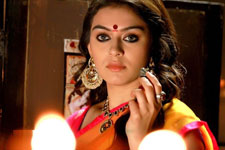 Ravi Kandala / fullhyd.com
EDITOR RATING
4.0
Performances
Script
Music/Soundtrack
Visuals
7.0
3.0
4.0
7.0
Suggestions
Can watch again
No
Good for kids
No
Good for dates
No
Wait for OTT
No
Nick Dunne, from Gone Girl, says, "I sometimes use humor as a defense mechanism." Today, this writer did something similar. When a friend asked if he was headed to watch PK, he carefully laughed it away and said he was watching CK. And when the world headed into Screens 2 & 3 of PVR to catch Aamir Khan in his latest year-end blockbuster, he headed dutifully into Screen 1 to watch Hansika Motwani, Lakshmi Rai and Andrea Jeremiah.

Chandrakala is about a palace in a village that a zamindar family owns and comes to the village to sell. The palace, as you'd have guessed, has a resident ghost who bumps off people periodically. The family that comes to sell the palace includes an elderly couple Murali (Vinay Rai) and Madhavi (Andrea Jeremiah), their daughter Lakshmi Rai, and Kovai Sarala and her husband.

Madhavi's brother Ravi (Sundar C) comes to the palace to visit his sister and finds strange things happening there. He decides to get to the crux of the matter. With the help of an egg that rotates like the needle of a compass at the North Pole, he finds out who in the house is possessed. He then finds out why the ghost is hanging around, and then takes the help of a Swamiji (Kota Srinivasa Rao) to get rid of it.

Chandrakala takes you back to the '80s. Everything in the movie, including the identity of the possessed woman and the backstory of the ghost, is predictable. The scares, chills and thrills also come dutifully at all the expected moments. The palace is the Gandharva Mahal set of the Manchu family, and frankly, it's tiring to see it anymore.

The only thing that keeps Chandrakala going is the humor. Santhanam and gang contribute to a fair amount of laughs. While we're sure that the lines were funnier in Tamil, they still retain some zing in the Telugu version.

Lakshmi Rai wears skimpy clothes and exercises enough to give eyefuls to the men in the palace, and Andrea Jeremiah spends the last half hour of the movie trying to seduce her husband, together upping the A factor of the film. They perform well, though. Hansika Motwani's face looks like it has a halo around it all the time. She has an extended cameo, and does a good job. Director Sundar C's own cameo is quite effective, too.

The technical values are good and the producers seem to have spent money where necessary. The graphics, though, are one too many. You really do not need a scary face in a window every second scene. As for the music, there are just three songs of the listen-and-forget variety.

Chandrakala is a good B- & C-centre horror flick - good-looking women, some skin show, scary faces galore and a devotional ending. If this is what you crave for, head out, else PK is a much safer bet.
Share. Save. Connect.
Tweet
CHANDRAKALA SNAPSHOT 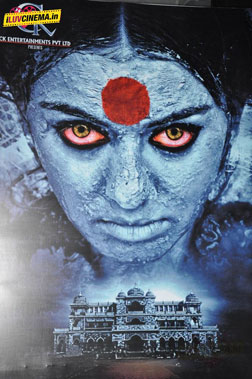 ADVERTISEMENT
This page was tagged for
chandrakala telugu full movie
Chandrakala telugu movie
Chandrakala reviews
release date
Hansika Motwani, Lakshmi Rai
Follow @fullhyderabad
Follow fullhyd.com on
About Hyderabad
The Hyderabad Community
Improve fullhyd.com
More
Our Other Local Guides
Our other sites
© Copyright 1999-2009 LRR Technologies (Hyderabad), Pvt Ltd. All rights reserved. fullhyd, fullhyderabad, Welcome To The Neighbourhood are trademarks of LRR Technologies (Hyderabad) Pvt Ltd. The textual, graphic, audio and audiovisual material in this site is protected by copyright law. You may not copy, distribute, or use this material except as necessary for your personal, non-commercial use. Any trademarks are the properties of their respective owners. More on Hyderabad, India. Jobs in Hyderabad.