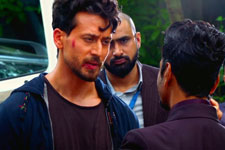 Punarvasu Pendse / fullhyd.com
EDITOR RATING
1.0
Performances
Script
Music/Soundtrack
Visuals
2.0
1.0
3.0
2.0
Suggestions
Can watch again
No
Good for kids
No
Good for dates
No
Wait for OTT
No
There was a point in Heropanti 2, a song where the mellow voice of A R Rahman croons "tu dafa kar" and it repeats, which honestly made me think that I was being called "tu the f****r" for watching this nonsense.

Indeed, this movie is a personal insult. To my time, to my desire to write, and most importantly to my intelligence.

Heropanti 2 is directed by Ahmed Khan who seems to really love Tiger Shroff, having directed Jackie Shroff's son in the Baaghi films. What Khan, or producer Sajid Nadiawala (with whom the "story" credits lie, a lie because there is no story), don't seem to love is making sense. Connect the dots between action scenes and random song-and-dance sequences, who cares about a plot, amirite?

I am going to structure this review the same way the movie is structured - after all, imitation is the sincerest form of flattery.

Inaaya (Tara Sutaria) is a self-made video-gaming billionaire. And she is always well-dressed, assuming every single occasion is going to the club or to a fashion show. And she turns heads, drives a Lamborghini, and likes to run behind Babloo - losing her posh accent for a "familiar" Hindi when yelling for Babloo to stop in a crowded building. [Insert random song and dance sequence here].

Laila (Nawazuddin Siddiqui) is a flamboyant magician turned cyber criminal. And he is dressed in ridiculously showy jackets. And he plans to steal EVERY Indian's tax returns on the 31st of March, because then the next day would be April Fools for everyone. [Insert random dialogue here.]

As a reviewer, I have have experienced fear, confusion and regret, along with a host of other emotions due to the movies I watch. Never have I ever, though, been indignant due to a movie - that's a first. ("Guess I do end up finding something new each time," said he, voice dripping with sarcasm.)

Heropanti 2 has no plot, or even a general outline of a story. The makers hope the viewers enjoy looking at the scantily clad duo of Tiger and Tara, and that Tiger mowing down hundreds of henchmen and their thug overlords passes off for entertainment. But who is being entertained by this dross? What is the target audience? Would anyone go to watch a movie which recycles the same old "kisiko aati nahi, meri jaati nahi" line in a supposed spiritual sequel?

Nawazuddin can both act and flex his range of emotions. Well, normally he can, but all he offers in Heropanti 2 is overacting, and extremely fake laughter. [Insert random dialogue here.]

It honestly blew my mind when I found out that Heropanti 2's soundtrack was an A R Rahman album. Not just that, he offers his singing skills alongside, and it still doesn't do anything because even the songs in Heropanti 2 don't make any sense. I applaud a set of filmmakers who can manage to ruin even Rahman's work - doing so takes a very specific set of skills.

Unless it takes a very specific set of skills to ruin your mood, too, stay far away from this one.
Share. Save. Connect.
Tweet
HEROPANTI 2 SNAPSHOT 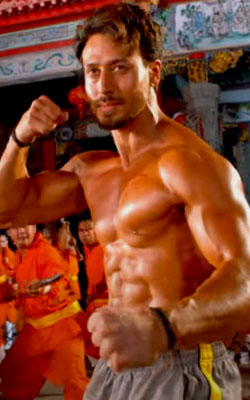 ADVERTISEMENT
This page was tagged for
Heropanti 2 hindi movie
Heropanti 2 reviews
release date
Tiger Shroff, Tara Sutaria
theatres list
Follow @fullhyderabad
Follow fullhyd.com on
About Hyderabad
The Hyderabad Community
Improve fullhyd.com
More
Our Other Local Guides
Our other sites
© Copyright 1999-2009 LRR Technologies (Hyderabad), Pvt Ltd. All rights reserved. fullhyd, fullhyderabad, Welcome To The Neighbourhood are trademarks of LRR Technologies (Hyderabad) Pvt Ltd. The textual, graphic, audio and audiovisual material in this site is protected by copyright law. You may not copy, distribute, or use this material except as necessary for your personal, non-commercial use. Any trademarks are the properties of their respective owners. More on Hyderabad, India. Jobs in Hyderabad.