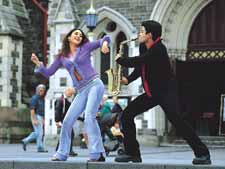 Chinmayi Sirsi / fullhyd.com
EDITOR RATING
5.0
Performances
Script
Music/Soundtrack
Visuals
NA
NA
NA
NA
Suggestions
Can watch again
NA
Good for kids
NA
Good for dates
NA
Wait to rent it
NA
When star sons and star daughters begin to have stars in their eyes about tinsel town and set out to star in their own films hoping to be stars themselves, the audience better watch out. Being the offspring of the yesteryears' filmi darlings might guarantee them curious glances and a few extra chances, but it doesn't seem to be helping their performances. With the obvious exception of Hrithik Roshan (and probably Karishma Kapoor), star-children seem to be becoming a serious bane of an already decaying industry.

Nothing illustrates the point better than Mujhe Kuch Kehna Hai, with Tusshar Kapoor (son of Jeetendra), Kareena Kapoor (daughter of Randhir Kapoor and Babita, and granddaughter of Raj Kapoor) and Rinke Khanna (daughter of Rajesh Khanna and Dimple Kapadia) in the lead roles.

This remake of Tholi Prema, the successful Telugu movie, has Karan (Tusshar Kapoor) as a college student who spends all his time in the canteen with a bunch of extremely irritating friends (and stereotypes, too - you even have the indispensable transversite). They play on what they call an orchestra, though you presume they mean a band.

Kaushik tries hard to establish Karan's character, by giving him a terribly typecast father, getting him to help a friend elope and giving him songs to sing, but all this falls flat, and you have the audience crying themselves hoarse for Kareena. When she finally appears, they wish they had kept shut. Kareena's introduction to the movie has her jumping up and down like a particularly stupid 5-year-old, and is hopelessly adolescent and quite disappointing.

Karan sees Pooja (Kareena Kapoor) jumping up and down, and promptly falls in love with her. But she disappears, leaving him stunned and searching hard. A few chance misses later, the two finally meet on the road to Shimla, where Pooja offers the stranded Karan a lift but loses control of her vehicle. The two jump out in time but are left hanging on to a cliff for a lives. Karan manages to save Pooja, but slips and falls himself.

The accident brings the two together, and friendship blooms. Karan learns that Pooja (USA returned) is doing some research on "Indian Culture" and that she's planning to return to the States to study in Harvard. Karan's sister Priya (Rinke Khanna) advises him to go slow, to make friends with Pooja before baring his heart to her.

A few misunderstandings, a wedding, a street fight and quite a few songs later, the movie ends on a faintly uncertain note, something that hasn't been done very often in Hindi cinema before. But this does nothing to help the fact that Mujhe Kuch Kehna Hai is an extremely juvenile effort, reeking of stereotypes and scenes stolen from other films.

Kareena Kapoor appears distant and a little aloof, but shows promise. The same, unfortunately, cannot be said about Tusshar Kapoor. With no screen presence and no acting ability to speak of, Tusshar would do well to go back to wherever he came from. The pair is mismatched in more than one ways, which doesn't help the movie one bit. Poor Amrish Puri in the role of Karan's happy-go-lucky uncle is wasted, and Rinke Khanna in the role of Karan's sis is not. All her mediocre talent must have been used up in playing that tiny role, which she plays unconvincingly.

Mujhe Kuch Kehna Hai, the story of a chicken hero, is another one of those star-children disasters that we could have done without.
Share. Save. Connect.
Tweet
MUJHE KUCH KEHNA HAI SNAPSHOT

ADVERTISEMENT
This page was tagged for
mujhe kuch kehna full movie
Mujhe Kuch Kehna Hai hindi movie
Mujhe Kuch Kehna Hai reviews
release date
Tusshar Kapoor, Kareena Kapoor
Follow @fullhyderabad
Follow fullhyd.com on
About Hyderabad
The Hyderabad Community
Improve fullhyd.com
More
Our Other Local Guides
Our other sites
© Copyright 1999-2009 LRR Technologies (Hyderabad), Pvt Ltd. All rights reserved. fullhyd, fullhyderabad, Welcome To The Neighbourhood are trademarks of LRR Technologies (Hyderabad) Pvt Ltd. The textual, graphic, audio and audiovisual material in this site is protected by copyright law. You may not copy, distribute, or use this material except as necessary for your personal, non-commercial use. Any trademarks are the properties of their respective owners. More on Hyderabad, India. Jobs in Hyderabad.