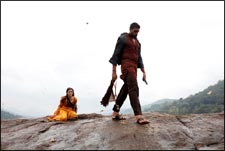 Samrat Sharma / fullhyd.com
EDITOR RATING
6.5
Performances
Script
Music/Soundtrack
Visuals
4.0
3.0
7.0
9.0
Suggestions
Can watch again
No
Good for kids
No
Good for dates
Yes
Wait to rent it
Yes
The first thing you have to understand about Raavan is that it isn't bad. It isn't bad because it is a brave film - a film that is a product of a lot of hard work, and determination to make art. Raavan is also one of those rare films that are not afraid of making us think. The sort of film that makes no excuses about what it is, and what it is trying to say. In short, it is a Mani film.

The second thing you have to understand is that a Mani film has no business being 'not bad'.

As a cinephile, and indeed a Mani-phile, I get where most of the decisions in the flick come from. But that does not make for an entertaining two and a bit hours. The film is almost good, the film is almost interesting, but Mani and his very talented crew are seduced by the dark side, much like the protagonist Raagini, and lose sight of an engaging narrative.

Ramayana is an epic ripe with allegory and rich characters ready for multiple interpretations, but it is also timeless because it happens to be a ripping awesome yarn. Using the Ramayana as a cultural touchstone to launch this tale was a great idea.

The story that the film makers tell - one that touches upon what makes us human, how what we call civilization is a breath away from our animal side, and most importantly how we must all face our demons, inner or outer, and the side that wins is the one that gets to tell the tale - is delicious for anyone who wants to read into it.

Sadly, the loose narrative and the poor writing make it less than engaging. The story is not a well-told yarn; it is a plodding, stumbling narrative that relies heavily on Santosh Sivan's extremely capable hands to coast along for a very long while.

Beera (Bachchan) is a low caste naxal / tribal leader / robin hood messiah somewhere in eastern India (the name of the place, Laal Maati, invokes the Bengal connection cursorily, but most of everything appears to be set in the North). When he kidnaps local police chief Dev's (Vikram) wife Raagini (Rai), Dev unleashes a manhunt with the help of his aide Hemant (Dwivedi) and a fun forest ranger Sanjeevani (Govinda).

For a film whose point could have been made without relying too literally on the epic, Raavan tries to fill in every known point of the story with a modern equivalent. Whether it is the painfully obvious name for Govinda's character, or the horrible Agni-Pareeksha analogue at the end, the writing is always 2 steps behind the vision of the director.

Not that Mani's walking steadfast either - none of the actors seems to be doing what the tone of the film suggests, with each one going off on his or her own tangent. Abhishek's over-the-top performance is the sort that can make or break a film, given the character's importance. Unfortunately, he has neither the charisma nor the utter lunacy to carry it off. I had high hopes with Vikram, but he has nothing much to do except be stoic and sullen - something that not only robs the film of some much-needed dichotomy, but also robs us of a great performance.

Aishwarya Rai has the presence her role requires, but not the voice. Her shrieky performance is at complete odds with everything around her, especially her steely (and admittedly magnificent) eyes. I reserved Govinda and Priyamani for the last - one is utterly atrocious and completely rubbish, while the other is brilliant in a short cameo. No marks for guessing who is which.

Again, this isn't a bad movie, just not a very good one. Any of these actors doing what they did here would have been okay in any other film, but not one with this much scope and potential. Ultimately Mani's problem is that his actors seem to be acting in completely different flicks from each other, and he seems to be making another completely different one.

Of course, Mani on a bad day is still leagues ahead of the riff-raff that call themselves directors, and he brings his game when it comes to creating an engaging action sequence. Every now and then he gives us a scene of breathtaking beauty and grace, showing the little ones how it's done.

That none of the now-expected high-quality Mani-Sivan shots carry much weight is due to the confused and vapid narrative, and the horrible hackery that passed for writing in this movie. The writing is so atrocious that I wished I didn't know Hindi and at least the subtitles would save me the painfully obvious and yet completely devoid-of-reality dialogues that the actors spout.

The idea is there, even the tone. What the makers forgot to bring was a good script and some notes for the actors to try and remain with the tone of the film. I would love to watch a film about a tribal leader and his nemesis the ruthless cop, which allegorically refers to the Ramayana, and also has its own subtext. Sadly, this isn't that flick.

This is still a proper film, and not the sort we get these days with scores of buffoons running behind each other and slapping each other in the name of 'comedy'. This deserves to be seen. It deserves the opportunity to make your own mind about it, warts and all. This deserves the few minutes you spend discussing its various subtexts and merits and demerits. What it doesn't deserve is praise or adulation.

More importantly, what we deserve for being abducted by the charismatic rogue called Mani Ratnam, is to be treated with dignity and honesty, and not this vapid, lifeless and dull narrative which is the real villain of the piece.

See Raavan full details
RAAVAN USER REVIEWS
1 - 5 OF 5 COMMENTS
POSITIVE  |  NEGATIVE |  NEWEST  |  OLDEST  |  MOST HELPFUL  |  LEAST HELPFUL
USER RATING
4.8
5 USERS
Performances
Script
Music/Soundtrack
Visuals
3.8
3.8
6.8
8.2
Can watch again - Unsure
Good for kids - No
Good for dates - Unsure
Wait to rent it - No
digitaldreamz on 30th Jun 2010, 5:53pm | Permalink
A movie with a simple story flowing at a very slow pace without any tweaks or surprises and definitely the maniratnam and a.r. rehman's charm is distinctly missing through out the movie.

As the title suggests most of the movies revolves only around abhishek bachan and he has done his part fairly well. Aishwarya is looking good as usual. Vikram is powerful but his role is weak. Priyamani is not worth to mention as she has a very little role and the most annoying was govinda's character with his monkey tricks and cheap comedy
The cinematography is excellent with picturesque locations and a visual delight especially to nature lovers. Maniratnam would prove worth if he is chosen as a brand ambassador for kerala tourism

all in all it's worth to watch it once, that too without expecting anything. once in a while during the movie it reminded me of khalnayak. freshness is lacking positively

RATING
6
2power10 on 21st Jun 2010, 3:02pm | Permalink
contd. from below: Mani Ratnam is a genius of a director, and his stamp is all over Villain. However, I can imagine why the Hindi-fied product would not be very palatable.
2power10 on 21st Jun 2010, 3:00pm | Permalink
i beg to disagree with Chris below; Mani Ratnam has made some crappy movies.. ok he has made ONE crappy movie for sure, and that was the shallow Guru. The reason Raavan carried so many expectations was that it was hyped out of proportion, and the reason it was hyped out of proportion was because it had Abhishek Bachcan in it.

I mean, i find it unfair that Raavanan - it can be claimed to be a superior piece of work AT LEAST for the fact that it has better performers - did not get even a fraction of all that red-carpet-walking and everything that had Indian media drooling.

btw, i haven't watched Raavana, but watched the telugu version and i found it a magnificient piece of work, save for some obvious directorial liberties that Mani Ratnam took.

And i knew the film would be what it is because I didn't think much of Yuva or Guru, either. Maybe that's why i enjoyed it.

Chris on 21st Jun 2010, 2:44pm | Permalink
A critic is not supposed to have a favorite director or genre etc. And, when he/she does, there is no point reading the review. It's from a fan and that says it all. A very average film. Mr. Ratnam has truly disappointed. But, genius needs a wake-up call every now and then. Watch out for his next one, it will be a classic!
RATING
3
gopalav5 on 19th Jun 2010, 3:27pm | Permalink
first and foremost this is not a bad review. now coming to the film as rightly said it is a Mani Ratnam film and cannot be Bad. Before seeing the film, since its premiere was already shown in London, I was sure somebody must have written about it and sat through whole night reading umpteen reviews some saying Good, some Bad. Normally I dont judge a film by its reviews as reviews are written by CRITICS and their job is to CRITICise a film. Saw the Hindi version on Prasads Big Screen, a 700 seater. The hall was full and for two and half hours not a single soul left the auditorium during the movie, even during songs. Again saw the film in Tamil. Again the hall was full and nobody left the auditorium during the film. Now having seen both the versions, I was left with only option. Which one is better? Definitely the Hindi One. It was a beautiful package.Abhi, Vikram,Govinda, Ravi Kishen have done better than their counterparts in Tamil.


Pros: Everything about the film
Cons: Nothing

ADVERTISEMENT
This page was tagged for
ravan movie
Raavan Hindi movie
ravan hindhi film
Raavan hindi movie
Raavan reviews
Follow @fullhyderabad
Follow fullhyd.com on
About Hyderabad
The Hyderabad Community
Improve fullhyd.com
More
Our Other Local Guides
Our other sites
© Copyright 1999-2009 LRR Technologies (Hyderabad), Pvt Ltd. All rights reserved. fullhyd, fullhyderabad, Welcome To The Neighbourhood are trademarks of LRR Technologies (Hyderabad) Pvt Ltd. The textual, graphic, audio and audiovisual material in this site is protected by copyright law. You may not copy, distribute, or use this material except as necessary for your personal, non-commercial use. Any trademarks are the properties of their respective owners. More on Hyderabad, India. Jobs in Hyderabad.