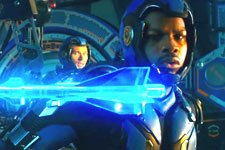 T J Reddy / fullhyd.com
EDITOR RATING
3.0
Performances
Script
Music/Soundtrack
Visuals
5.0
1.0
3.0
5.0
Suggestions
Can watch again
No
Good for kids
Yes
Good for dates
No
Wait to rent it
Yes
Filmmakers/storytellers/artists have been stealing ideas from / being inspired by each other and the general public from times immemorial. We see these play out as long-drawn-out controversies from time to time as they sue one another for the right to make money off their intellectual property. We chuckle as these millionaires indulge in schoolyard fights. But after sitting through Pacific Rim: Uprising, I think each and every one of us has a fair chance of suing Universal as it has clearly stolen the stories we made up while playing with our toys during bath time.

Pacific Rim: Uprising and its predecessor have never pretended to be high brow entertainment. They are films about giant robots fighting giant monsters with little to no effort being put into common sense. But unlike the first Pacific Rim, this film does not have Guillermo Del Toro behind the camera to add personality and panache to the proceedings, and hence we circle back to a script and film that are no better than what your soapy 7-year-old-self came up with on the fly.

The movie follows the life and times of Jake Pentecost (John Boyega), son of the impossibly named Stacker Pentecost (Idris Elba) - the man who canceled the apocalypse. Jake, a former Ranger who lives a life of entitlement and petty crime, is recruited by the PPDC (Pan-Pacific Defence Corps) to train a new team of Rangers while working with Nate Lambert (Scott Eastwood). Running parallel to this are plot threads that involve Liwen Shao (Jing Tian) and her company's attempts at automating Jaegers, and scrappy child genius Amara Namani (Cailee Spaney) and her adventures at the Ranger training facility.

Soon enough, all these plot points are smothered in their sleep by a few hulking Kaijus and an inexplicable twist that involves Newt (Charlie Day). This leads you to Kaiju vs Jaeger 2: Electric Bugaloo, and if all of this seems all too familiar to a few of you out there, it is because this is the exact same plot as Independence Day: Resurgence. If you were to add a child and subtract a Vivica A Fox, the resemblance is uncanny.

While mimicking a child's imagination is bad enough, the fact that this movie follows the same pattern as the atrocious Independence Day: Resurgence, down to the tease at the end, reminds me of a colleague's joke about copying from a bloke who himself is trying to clear arrears from last year. It truly is a sight to behold. We used our common sense and stayed clear of any cinema halls when IDR made its way on to the big screen, but our love of Del Toro tricked us into watching this abominable bore. Consider this two reviews for the price of one.

Pacific Rim: Uprising bombards the screen with a metric ton of rage, action, teamwork, music that is trying so hard to be epic, human characters you just can't care about, and anything else you'd see in a run-of-the-mill Transformers film. There is a distinct sense of commercialization to the movie on a whole, and not just the Jaegers (that have merchandising possibilities). The plot beats and character arcs are created to serve demographics and not to serve the story being told. The film is PG-13 to attract a wider audience, it has consequence-free action a la Man Of Steel to please supposed action film fans, a "strong" teen character to please the 13- to 19-year-olds in the audience, a slew of underwritten Asian female characters to please the lucrative Chinese market while also ticking off the female empowerment box, Scott Eastwood because Paul Walker is no more, and John Boyega because Star Wars.

All these criticisms are not to say the film is without merit. The hastily-cast actors are not inherently bad performers. Boyega is endlessly watchable, and his roles in Star Wars, Detroit and Pacific Rim are a clear indicator of the range he possesses as an actor. Cailee Spaeny too isn't far behind. Even though she isn't afforded a character of X-23's depth, her ability to command the screen and hold a scene at such a tender age makes you excited for her future endeavours.

While most others in the cast fill their roles out by making little to no noise, a singular Charlie Kelly-sized thumb (a shout-out to It's Always Sunny fans) sticks out prominently. Charlie Day is quite the gifted comedian and writer. The film employs him to do a little more than just be the awkward funny fellow, but the rush job it does while executing his character's C-change is laughably bad - I should know, as I sat through a cinema hall full of audiences laughing at a man trying so hard to come off as anything but funny.

The movie's score follows a similar pattern, too. It can't seem to make its audiences buy into its epicness no matter how hard its horn section echoed in a sparsely packed theatre. Watching a few people fall asleep as the film's grotesquely long third act kicked into motion answered many a doubt I had about my opinions of the film.

The camerawork too seems to have dropped the ball quite a bit. While there are many callbacks to classic anime Mobile Suit Gundam, the movie doesn't match the creativity shown by a show apparently made for kids. This film's thematics were already on shaky turf, but it abandons its predecessor's trademark of having smooth wide-shots laced with creative edits that made the action seem more compelling and genuinely fun. And that is what this movie sorely lacks - FUN.

As the human race, we have been saturated with robots fighting each other, monsters fighting each other, and robots and monsters fighting each other to our very brim. Almost every story that can be told with these premises has been told 10 different times, and with varying degrees of quality. But if good artists borrow and great artists steal from the best of these stories, we genuinely don't know why this bunch of filmmakers chose to lift their story from one of the worst movies to ever grace this genre. While that might baffle us for years to come, what we are clear about is that all we wanted to do was create an uprising of our own with the very few dissatisfied people in our hall.
Share. Save. Connect.
Tweet
PACIFIC RIM UPRISING (HINDI) SNAPSHOT 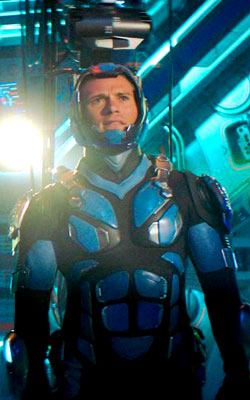 ADVERTISEMENT
This page was tagged for
pacific rim uprising movie in hindi
Pacific rim upsiring. Moviemade. Come hindi
pacific rim uprising full movie in hindi
Pacific rim moves in hindi
Pacific Rim Uprising (Hindi) hindi movie
Follow @fullhyderabad
Follow fullhyd.com on
About Hyderabad
The Hyderabad Community
Improve fullhyd.com
More
Our Other Local Guides
Our other sites
© Copyright 1999-2009 LRR Technologies (Hyderabad), Pvt Ltd. All rights reserved. fullhyd, fullhyderabad, Welcome To The Neighbourhood are trademarks of LRR Technologies (Hyderabad) Pvt Ltd. The textual, graphic, audio and audiovisual material in this site is protected by copyright law. You may not copy, distribute, or use this material except as necessary for your personal, non-commercial use. Any trademarks are the properties of their respective owners. More on Hyderabad, India. Jobs in Hyderabad.