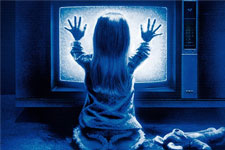 Nupur Barua / fullhyd.com
EDITOR RATING
5.0
Performances
Script
Music/Soundtrack
Visuals
6.0
6.0
6.0
7.0
Suggestions
Can watch again
No
Good for kids
No
Good for dates
Yes
Wait to rent it
No
It is a mystery why present day filmmakers would want to remake Poltergeist, the 1982 movie that was co-written by Steven Spielberg. After all, it was not exactly the best horror movie that we have seen, given that the 1980s produced a lot of classics in the genre.

The word poltergeist is German, and it means a ghost who makes a lot of noise, literally. As we have seen in countless movies over the past 40 years or so, spirits usually create a commotion by throwing things around, and Gil Kenan's Poltergeist promises exactly that, and more.

The Bowens are looking for a house to recover from the bad phase that they have faced recently. Husband Eric (Sam Rockwell) is out of a job, and wife Amy (Rosemarie DeWitt) has suddenly lost the ability to continue as a writer. The house they shift to is in a quiet area, and suits their needs. When son Griffin (Kyle Catlett) hears strange noises in his attic room, he refuses to sleep alone, even as his parents try to convince him that it was just a squirrel. Later, Griffin hears more noises and goes downstairs to investigate, only to find his kid sister, Maddie (Kennedi Clements), chatting with the static television screen. He then sees a hand pressed against the screen from inside. Maddie tells her family that "they" are going to be here soon, but she cannot explain.

Eric and Amy do not dwell over the incidents of the previous night, and go out for dinner, leaving their eldest daughter, Kendra (Saxon Sharbino), in charge of her younger siblings. That is when the kids discover that there is more to the house than meets the eye. Griffin almost dies when a tree comes crashing down into his room, and Kendra is in the grip of some unknown power in the basement. In the chaos, Maddie disappears, and is soon discovered on the other side of the television screen.

Eric and Amy have no choice but to approach the Paranormal Research department where Amy was a student once. The team of researchers who arrive at the house to help them out quickly realise that this particular house was built over a cemetery, and the souls of those dead bodies are still looking for release. Those spirits now want Maddie to be their facilitator to the light, and unless the human beings can do something about it, and soon, Maddie will be lost to them forever.

For those who still remember the first of the Poltergeist trilogy of the 1980s, you will notice that the story is almost copied from the original. Besides a few minimal changes such as to the names, and the inclusion of modern technology such as GPS, the story has not changed much. Maddie is the chosen one because of the purity of her soul, but the others have to suffer as much.

Even if you have not seen the 1982 movie, you will still recognise that the elements that make a horror story are pretty much in place. The first aspect, of course, is the noise. That is followed by things flying around. Then there is the victim - in this case Maddie - and the uncertainty that the rest of the characters may or may not be killed, depending on whether they interfere with the plans of the spirits. And then there are the exorcists, or paranormal researchers in this case. The screenplay follows the expected graph - the situation being set up, the situation, and the resolution of the situation, complete with plenty of chaos in between.

The movie is not a scary one for hardened horror buffs. The chills and the thrills are exactly where they should be. Like in any normal paranormal film, you know where things are headed, and you can predict the end. The dialogues are not very innovative, and humour seems to be missing from the story. The tree seems more intriguing than the humans.

Sam Rockwell grimaces his way through the movie, depicting the helpless man without a job and with a new problem. He does not seem too convinced, however, of the script. Rosemarie DeWitt is more involved with her character, and therefore more convincing. Jared Harris and Jane Adams play off each other quite well as the divorced couple who still work together professionally. Saxon Sharbino can scream, which is why she must have taken up this role. Kyle Catlett is sincere, and Kennedi Clements is suitably disturbing.

The production and costume design are both average, and normal. The cinematography is not too flashy, and does not distract from the content. The CGI is better than the original, of course, but also irrelevant in places. The music is suitably, yet predictably, effective. The editing is crisp.

It is possible that this movie may spawn off a sequel, and then another, and we may just get another trilogy of the Poltergeist. We still suggest that you check out the original, though - it had better music and more convincing acting.
Share. Save. Connect.
Tweet
POLTERGEIST (3D) SNAPSHOT

ADVERTISEMENT
This page was tagged for
Poltergeist (3D) english movie
Poltergeist (3D) reviews
release date
Sam Rockwell, Rosemarie DeWitt
theatres list
Follow @fullhyderabad
Follow fullhyd.com on
About Hyderabad
The Hyderabad Community
Improve fullhyd.com
More
Our Other Local Guides
Our other sites
© Copyright 1999-2009 LRR Technologies (Hyderabad), Pvt Ltd. All rights reserved. fullhyd, fullhyderabad, Welcome To The Neighbourhood are trademarks of LRR Technologies (Hyderabad) Pvt Ltd. The textual, graphic, audio and audiovisual material in this site is protected by copyright law. You may not copy, distribute, or use this material except as necessary for your personal, non-commercial use. Any trademarks are the properties of their respective owners. More on Hyderabad, India. Jobs in Hyderabad.