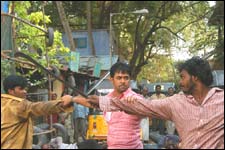 Deepa Garimella / fullhyd.com
EDITOR RATING
3.5
Performances
Script
Music/Soundtrack
Visuals
6.5
4.0
3.5
6.0
Suggestions
Can watch again
No
Good for kids
No
Good for dates
No
Wait to rent it
Yes
Jai Sambasiva is the story of a common man's angst in the cruel world of rowdy-sheeters, nauseating politicians and Saikumar's innard-churning dialogues on how to best demean a woman's dignity. Its ending is pretty commonplace - the movie ends with the common man mercifully able to get out of his seat and head towards the parking lot.

Jai Sambasiva did have a little seed of an idea beneath all that gore and dizzy villain-hero dynamics. However, the seed remains a seed, as a potentially dramatic non-violence vs violence debate gets completely wasted in the heavy-duty commercialism.

Eeshwar (Arjun) protects his village from the revolting acts of the heinous local MLA, Bhujangam (Saikumar), in ways that make his mother (Sudha) hyperventilate in anxiety and fear. Apparently, she lost her husband to this pattern of bloodshed and violence in the name of justice, and she doesn't want her son too to die.

So she takes him to a swamiji (Arjun again) in Srisailam, who urges him to look after the safety and welfare of his mom and sis first before hoping to enter 'Executive Local God of my village' in his CV. Eeshwar retorts that all this preaching is fine, but can the swami live a non-violent life in Eeshwar's circumstances, as Eeshwar, for 3 months? Especially when the villains haven't bathed in 3 generations?

So the swami takes up the challenge and the two exchange clothes. The new Eeshwar is initially a disaster according to everyone who's used to him, what with his willingness to spout aphorisms at the drop of a hat, and his self-assured non-resistance to Bhujanga's iniquities. But his mother is pleased. And his sister isn't - she loved him more when he was the fighter-types.

Man of God or not, one would think that anyone preaching non-violence would reform the violent guys by showing that brains are superior to brawn. In Jai Sambasiva, the swamiji starts out by getting beaten up brutally, and also showing that he is truly a man who's beyond all the petty hatred and violence. And soon, he is just shown as having superior fighting skills than even Eeshwar. He can suffocate goons by simply squeezing their hands, he can fling heavy-weights to the next orbit, and he can make the sun rise in the west.

So the second half quickly degenerates into run-of-the-mill 'entertainment', aided by a helplessly weeping and quivering mother, a manhandled sister and a manhandled girlfriend, a brutally murdered friend, and the rest of the checklist.

Arjun is your typical hero - in whose presence no wrong can happen. He pulls off the fights and dances well, and looks his age only if the camera comes dangerously too close. Saikumar's dialogues are completely over the top, but he's good. He gets to play that disgusting brand of villains, the kind who play complex mind games in a very unsubtle way. The heroine (Pooja Gandhi) has a few well-performed anguish-ridden scenes. Sudha is her usual energetically emotional self.

Jai Sambasiva has the look of a big-budget flick, but the songs are bland, and too few. A couple of vehemently religious songs are woven into the story.

In all, this one's completely for the masses. No kids, no family, no date, no movies on TV, and nothing else to do - that's how you get to be eligible to watch Jai Sambasiva.
Share. Save. Connect.
Tweet
JAI SAMBASIVA SNAPSHOT

ADVERTISEMENT
This page was tagged for
jai sambasiva movie story Telugu
Jai Sambasiva telugu movie
Jai Sambasiva reviews
release date
Arjun, Saikumar
Follow @fullhyderabad
Follow fullhyd.com on
About Hyderabad
The Hyderabad Community
Improve fullhyd.com
More
Our Other Local Guides
Our other sites
© Copyright 1999-2009 LRR Technologies (Hyderabad), Pvt Ltd. All rights reserved. fullhyd, fullhyderabad, Welcome To The Neighbourhood are trademarks of LRR Technologies (Hyderabad) Pvt Ltd. The textual, graphic, audio and audiovisual material in this site is protected by copyright law. You may not copy, distribute, or use this material except as necessary for your personal, non-commercial use. Any trademarks are the properties of their respective owners. More on Hyderabad, India. Jobs in Hyderabad.