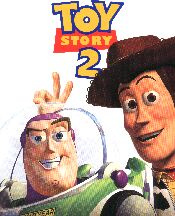 Feroz Hassan / fullhyd.com
EDITOR RATING
7.0
Performances
Script
Music/Soundtrack
Visuals
NA
NA
NA
NA
Suggestions
Can watch again
NA
Good for kids
NA
Good for dates
NA
Wait to rent it
NA
In 1995, Toy Story captured the imagination of the kids as well as a few adults with an interesting theme: that of living toys. It is now back with a sequel. The main characters are all in place with Woody, the cowboy, heading the gang.

The movie starts with him getting ready to go, with his owner Andy, to the cowboy camp. But an accident in which Woody's arm snaps prompts Andy to leave him behind. As dust gathers upon them, the toys are all waiting for Andy to come back.

However, in an attempt to rescue Wheezy the dolphin from a yard sale, Woody is kidnapped by an avaricious toy dealer, Al. The other toys set out on a mission to retrieve him from Al's clutches.

In Al's abode, Woody meets other toys that are gathering dust and happen to be waiting for him. That's because Woody is the star of a puppet show on television from the fifties and these toys form his 'round-up' gang. Now these toys were waiting to be sent to a museum in Japan for which Woody has to be there with them.

This throws him in a dilemma. He decides to stay, but when his old mates show up, he is reminded of his days with Andy. How he resolves the conflict and manages to dodge Al forms the rest of the movie.

The animation is really slick and the script itself incorporates all the ingredients of a potboiler. For one thing, it manages to be amusing, touching and thrilling in equal measure. And of course, the toys have their own unique moral and philosophical problems in life they have to deal with.

Tom Hanks lends his voice to Woody and it sure does add that extra pep to the latter's demeanor. Tim Allen's is the other star voice in the movie, which is lent to Buzz Lightyear, the guy with all the technology and Woody's best pal. Before you ask "Tim who?" think of "Home Improvement" on Star World.

Jessica is another character to watch out for. She is a part of the round-up gang. Mr. Potato Head and Rex the dinosaur also keep us amused. By the way, we now have a Mrs. Potato Head.

Kids can surely expect a lot of harmless fun. As for the adults, they can keep their young ones company.
Share. Save. Connect.
Tweet
TOY STORY 2 SNAPSHOT

ADVERTISEMENT
This page was tagged for
Toy Story 2 english movie
Toy Story 2 reviews
release date
Tom Hanks, Tim Allen
theatres list
Follow @fullhyderabad
Follow fullhyd.com on
About Hyderabad
The Hyderabad Community
Improve fullhyd.com
More
Our Other Local Guides
Our other sites
© Copyright 1999-2009 LRR Technologies (Hyderabad), Pvt Ltd. All rights reserved. fullhyd, fullhyderabad, Welcome To The Neighbourhood are trademarks of LRR Technologies (Hyderabad) Pvt Ltd. The textual, graphic, audio and audiovisual material in this site is protected by copyright law. You may not copy, distribute, or use this material except as necessary for your personal, non-commercial use. Any trademarks are the properties of their respective owners. More on Hyderabad, India. Jobs in Hyderabad.