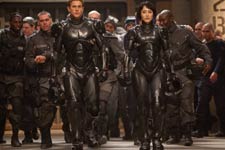 Nupur Barua / fullhyd.com
EDITOR RATING
6.0
Performances
Script
Music/Soundtrack
Visuals
6.0
5.0
5.0
8.0
Suggestions
Can watch again
Yes
Good for kids
Yes
Good for dates
No
Wait to rent it
No
What is it about these robots that brings out the little boys in men? Apparently, Guiellermo del Toro was walking on the beach one day, minding his own business, when he suddenly began to visualise monsters coming out of the ocean and fighting land-borne giants. Before you could say "Mama", or even "Hellboy", he had conceptualised a script that eventually became Pacific Rim. In 3D, of course.

The concept began with "Kaiju" (a Japanese word), or "strange beast". And that which is strange will naturally be menacing, and dangerous.

So there is Raleigh Beckett (Charlie Hunnam), who is burdened with a terrible guilt and tragedy. He was once the other half of a team that fought these kaijus (in this case, giant monsters that come from the bottom of the ocean with one purpose in mind - to destroy humankind and all that it stands for). The other half was his beloved brother, and he died half a decade ago while trying to push some kaijus back to the sea.

The brothers used to operate the complicated Jaeger, a weapon of robot destruction. These weapons are typically controlled by "pilots", whose minds are inter-connected so that they can jointly handle the strain, both mental and physical, of managing these Jaegers. Now that Raleigh has lost his brother, and the entire Jaeger unit is almost redundant, he is a lost soul in need of a purpose.

That comes with the opportunity to build a "wall" in Hong Kong, to fortify the Pacific countries against future kaiju attacks. It is in Hong Kong that Raleigh meets his future co-pilot, Mako Mori (Rinko Kikuchi). This is an important development only because Raleigh has not been able to "connect" with another co-pilot since his brother's death.

The rest of the movie follows even more complicated explanations on how to set up the Jaeger operation again, and how to make friends and lose enemies in combat zones.

The basic theme of the movie is about rising up from the ashes to reclaim lost glory, literally. Both the lead characters, Raleigh and Mako, have traumatic histories, and it makes sense that they get together as a formidable team, because they understand each other's need to be weird about the aforementioned tragedies. Their emotional connect is the key to saving the world, and it is almost then like a love story, where two lost souls find one another to bring about a miracle, of sorts.

Guillermo del Toro, with Travis Beacham, succeeds in bringing out the poignant in a script where steel crushes more steel and entire populations disappear with one storm. That is the saving grace of a screenplay that is otherwise repetitive (with acts of valour and cowardice, and with destruction of humankind) - there is nothing here, in terms of storytelling and plot points, that you have not already seen before, therefore making every twist predictable.

The other hero of the script is, of course, the 3D. The director's vision (the one he had that day on the beach) is enhanced many times over to give you a visual treat that leaves you reeling. The initial inspiration for those monsters may have been Godzilla, but the fine detailing and the variety in designs of monsters and machines alike will leave you gasping for more.

A word of warning - if you are not inclined towards these fantastical creatures (along the lines of Transformers and Godzilla), then you should maybe not opt for the 3D version. The movie is loud, literally, so be prepared.

Despite the visual effects, most of the action is repetitive, and those sequences become monotonous after a point. Again, most of these fight scenes take place in the dark, in the water, so you may have a tough time following the action. The production design lacks the lustre that you would expect from a movie like this, but it works well enough.

Except Idris Elba, none of the other actors are well-known stars. The lead pair, Charlie Hunnam and Rinko Kikuchi are both poker-faced, mostly. While the former tries to work his charm on screen, the latter is plain bored, or so it seems. They thrive in sequences that require them to show off their fighting skills. Idris Elba is relatively subtle.

Pacific Rim 3D is one of those movies that will be talked about for its action sequences and visual effects, and those are enough reasons to watch the movie once. For the more intellectual minds, the film offers complicated scientific jargon and an exploration of the human psyche in times of stress, and also deals with the spirit of brotherhood and human nature. Apocalypse, Pentecost points out, is postponed once again, which is why this is a movie for optimists and hero-worshippers.
Share. Save. Connect.
Tweet
PACIFIC RIM SNAPSHOT 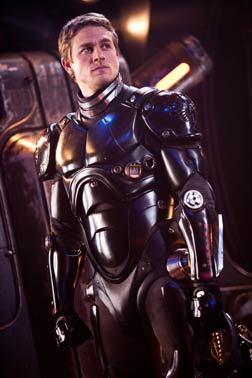 ADVERTISEMENT
This page was tagged for
Pacific Rim english movie
Pacific Rim reviews
release date
Charlie Hunnam, Idris Elba
theatres list
Follow @fullhyderabad
Follow fullhyd.com on
About Hyderabad
The Hyderabad Community
Improve fullhyd.com
More
Our Other Local Guides
Our other sites
© Copyright 1999-2009 LRR Technologies (Hyderabad), Pvt Ltd. All rights reserved. fullhyd, fullhyderabad, Welcome To The Neighbourhood are trademarks of LRR Technologies (Hyderabad) Pvt Ltd. The textual, graphic, audio and audiovisual material in this site is protected by copyright law. You may not copy, distribute, or use this material except as necessary for your personal, non-commercial use. Any trademarks are the properties of their respective owners. More on Hyderabad, India. Jobs in Hyderabad.