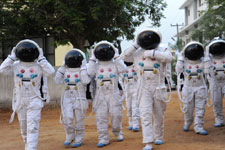 Noha Khan / fullhyd.com
EDITOR RATING
5.0
Performances
Script
Music/Soundtrack
Visuals
7.0
5.0
5.0
6.0
Suggestions
Can watch again
No
Good for kids
Yes
Good for dates
Yes
Wait to rent it
No
Amrutham: Chandamama Lo is a wealthier descendant of the popular sitcom Amrutham, that left behind a legacy of fans when it stopped airing on TV. Director Gangaraju Gunnam hoped to cash in on the success of his old series on the silver screen with the addition of some science fiction. He may well have succeeded with aplomb, had he given the minds of the viewers a little more credit.

The film revolves around two cuckoo friends, Amrutham (Srinivas Avasarala) and Anjaneylu (Harish), who are separated by Amrutham's father-in-law (Chandra Mohan) because the latter believes that the friends have a negative influence on each other. They are made to promise not to meet each other for as long as the Egyptian pyramids remain standing.

They part ways and make it big as hoteliers. As luck would have it, the pyramids are bombed by a terrorist, and the friends finally meet again after 5 years. They launch a joint venture and are wildly successful. Their success is like a needle in the eye of their previous landlord, Appaji (Sivannarayana), who conspires to swindle them of their money. He convinces them to invest in tickets to the moon. They fall for the idea and part with everything they have, for plans to build a hotel, Amrutha Vilas, on the moon.

The company that they hand over their lives' savings to closes down, and they are reduced to being dependent on Appaji's mercy. Still undaunted, they start a small restaurant in the little place they are given. This part of the movie is endearing, and is reminiscent of the actual series.

Tragedy strikes and their small business goes up in flames. However, in the meantime, a new company takes over the old rocket company, and they get all their tickets back. The two friends and their families journey to the moon and begin industrialising it.Their experiences and antics on the moon form the rest of the story.

Amrutham: Chandamama Lo has its moments of riotous comedy, witty dialogues and delightful parodies that derive from wild imagination. There is also some clever potrayal of societal issues. The downside, however, is that in an aim to go right off the top, Gunnam slips into the annoying "moon" of slapstick comedy. The sequence on the moon is stretched without reason, and after a while, you find yourself waiting for the end.

The movie does not differentiate between the actors, and there isn't just one hero or heroine in it, even though Srinivas Avasarala outshines the others as Amrutham, succeeding in making you laugh with his unique mannerisms and body language even when he appears serious or clueless. Harish is believable, too, as Anjaneylu, though the audience may find him lacking as compared to Gundu Hanumantha Rao (who used to play Anjaneylu on TV).

Sivannarayana has been retained as Appaji from the earlier cast, and is just as good, if not better, at some places. Inturi Vasu, as Sarvam, is funny as Anjaneylu's committed bodyguard. The rest of the cast is okay as well.

The technical aspects, especially the cinematography, of the movie are rumoured to have been expensive, though with a majority of the audience exposed to world class 3D effects, comparisons are inevitable and this film has a long way to go. Some of the songs are pleasant, but the rest function more as speed-brakers.

All in all, this is a movie that throws logic to the winds, and as long as you're okay with that, you'll have fun watching most of it.
Share. Save. Connect.
Tweet
AMRUTHAM CHANDAMAMA LO SNAPSHOT 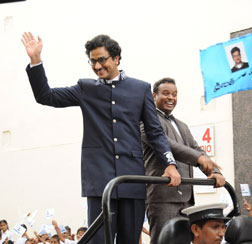 ADVERTISEMENT
This page was tagged for
Amrutham Chandamama Lo telugu movie
Amrutham Chandamama Lo reviews
release date
Srinivas Avasarala, Harish Koyalagundla
theatres list
Follow @fullhyderabad
Follow fullhyd.com on
About Hyderabad
The Hyderabad Community
Improve fullhyd.com
More
Our Other Local Guides
Our other sites
© Copyright 1999-2009 LRR Technologies (Hyderabad), Pvt Ltd. All rights reserved. fullhyd, fullhyderabad, Welcome To The Neighbourhood are trademarks of LRR Technologies (Hyderabad) Pvt Ltd. The textual, graphic, audio and audiovisual material in this site is protected by copyright law. You may not copy, distribute, or use this material except as necessary for your personal, non-commercial use. Any trademarks are the properties of their respective owners. More on Hyderabad, India. Jobs in Hyderabad.