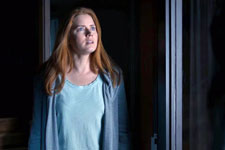 Swaroop Thotada / fullhyd.com
EDITOR RATING
8.0
Performances
Script
Music/Soundtrack
Visuals
7.0
8.0
7.0
8.0
Suggestions
Can watch again
Yes
Good for kids
Yes
Good for dates
Yes
Wait for OTT
No
Arrival is one of those films that are audacious enough to stick to the idea and not be over-eager to deliver a spectacle. Deliver it does, but the feat is more cerebral, and inclines towards but doesn't indulge in visual achievements. It has alien spaceships, world powers gearing up for war against these interstellar intruders, military colonels contemplating the consequences of war against a superior species, political and civil unrest, and scientists deciphering the alien communications using cutting-edge technology, but all these just surround the film's central human element and thankfully do not cloud it.

The film is a thematic successor of similar movies like Robert Zemecki's brilliant Contact and Tarkovsky's meditative space epic Solaris. Like Solaris, Arrival penetrates into the human psyche as much as it explores the intriguing possibilities of otherworldly existences. Like Contact, it zooms in on a very emotional and personal human story through a grand-scale scientific extrapolation of ideas. Nolan's Interstellar pulled a similar feat, trying to intertwine the scientific and the visceral, validating one through the other. Though Hathway's speech in that one took it too far, the film was considerably successful in its attempt. Arrival continues this interesting trend of populating complex scientific ideas with deeply emotional undercurrents.

Arrival shows giant alien spacecrafts suddenly appearing at 12 places on Earth, pushing governments into anxiety and people into chaos. Unrest grows as the world is both intimidated and repulsed by the sudden intrusion. Meanwhile US Army Colonel G T Weber (Forest Whitaker) tries to decipher the alien communications that sound like whale noises. He seeks the help of Louise Banks (Amy Adams), a linguistics expert who helped him once in translating some Farsi videos.

It's not going to be that straightforward this time obviously because Louise couldn't possibly be an expert on alien languages, but she checks out the spacecrafts anyway. They are unflattering in their design, but intimidating in their size - they are like giant watermelon seeds, hovering vertically above the ground. Perhaps this is an homage to the black monoliths in Kubrick's masterpiece 2001: A Space Odyssey, whose purpose is similar - to mysteriously appear and push humanity to the next level. Anyway, Louise joins a team that includes a theoretical physicist Ian Donnelly (Jeremy Renner), and they venture to find out what the aliens' business is here.

The film employs language and linguistics both as a theme and a plot device. Much of the film's time is dedicated to the interactions between humans and the aliens, as they initially struggle to find a common ground in beginning to understand each other. Louise says that while our language is just an expression of sound, theirs is more resonant with meaning and hence more efficient. The aliens later understand that to communicate using their whale-like sounds is futile, and reciprocate to Louise's visual communication. They emit a kind of black smoke and form symbols in air, and from then on, the communications witness a breakthrough.

The film contemplates our conception of time, and proposes that time, unlike what we believe, is not exactly linear. Physicists say that though we experience time as a forward-arrow that is unidirectional, it is merely our subjection, and time by itself doesn't travel only forward. Talking more about this key element of the film is not possible without spoiling the movie, and so I refrain from that.

Eric Heisserer's screenplay spirals upon itself, like the film's conception of time. The last time this was so convincingly pulled off was in Nolan's Memento. Arrival questions and wonders about time and memories, and plunges subtly into complex ethical conundrums, and that makes this an apt approach. Denis Villeneuve lets the film pace on its own terms, and employs atmospheric visuals to draw you into the enigma. The slow pace of the proceedings is deliberate - to allow you to ponder over and perhaps wonder about the questions it tackles. This is evident from how it intends its payoff not as a stunt but just as a revelation.

It is impossible not to admire Bradford Young's masterful cinematography that completely fuses into the film's themes of contemplation, uncertainty and eventually redemption. He draws a thin line between gloomy and moody, and lights his interiors with incredible accuracy. The slow pans and fluid gliding of the camera hint at the reassurance the film ultimately delivers. The same can be said about Johan Johannsson's soundtrack that underlines mystery and amplifies emotion.

Arrival is an engaging experience. While the plot might raise many logical questions, it never lets its focus be diverted from the questions it wants you to ask. If not for anything else, this film is a must-watch at least for Amy Adams' terrific performance.
Share. Save. Connect.
Tweet
ARRIVAL SNAPSHOT 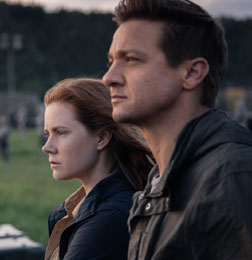 See Arrival full details
ARRIVAL USER REVIEWS
1 - 1 OF 1 COMMENTS
POSITIVE  |  NEGATIVE |  NEWEST  |  OLDEST  |  MOST HELPFUL  |  LEAST HELPFUL
USER RATING
4.0
1 USER
Performances
Script
Music/Soundtrack
Visuals
9.0
4.0
6.0
6.0
Can watch again - No
Good for kids - No
Good for dates - No
Wait for OTT - Yes
Booyakasha on 7th Dec 2016, 10:47am | Permalink
Well done Swaroop. Impressed that you managed to decipher this gloomy snail train. I found Arrival slow and confusing. There were some interesting bits but a lot of things didn


Pros: The sense of 'what next?'
Cons: Slow pace
RATING
4
Swaroop Thotada on 9th Dec 2016, 7:46am | Permalink
Well, I say Terrence Mallick's Tree of Life is one the best films ever made. I think that explains everything about me :)
Booyakasha on 13th Dec 2016, 10:40am | Permalink
Oh...ok. Haven't seen that. Be sure to check it out.
Swaroop Thotada on 13th Dec 2016, 11:21am | Permalink
Oops. I mentioned that film to explain that I have a thing for "gloomy snail train" kind of films :)
As a way to justify why I like films like Arrival that do not mind about pace and focus on the message.
Tree of Life is the epitome of "gloomy snail train" movies (though it has a reassuring theme and a sort of optimistic climax, probably derived from Malick's catholic beliefs). So not very sure whether you will like it or not. Of course its perfectly alright to not like it. Not everyone has a weakness for transcendental ramblings :)
So there, I warned you :) :)
The Common Movie Goer on 9th Dec 2016, 12:25pm | Permalink
I disagree with Booyaksha. I love my mass films, but this is one of, if not the best, Sci-Fi film I have seen in a long time. The way it all came together only when the director wanted it to, and not a moment too soon speaks volumes about the screenplay and the story. I didn't think someone could weave emotional threads with ease into a film like this.

ADVERTISEMENT
This page was tagged for
Arrival english movie
Arrival reviews
release date
Amy Adams, Jeremy Renner
theatres list
Follow @fullhyderabad
Follow fullhyd.com on
About Hyderabad
The Hyderabad Community
Improve fullhyd.com
More
Our Other Local Guides
Our other sites
© Copyright 1999-2009 LRR Technologies (Hyderabad), Pvt Ltd. All rights reserved. fullhyd, fullhyderabad, Welcome To The Neighbourhood are trademarks of LRR Technologies (Hyderabad) Pvt Ltd. The textual, graphic, audio and audiovisual material in this site is protected by copyright law. You may not copy, distribute, or use this material except as necessary for your personal, non-commercial use. Any trademarks are the properties of their respective owners. More on Hyderabad, India. Jobs in Hyderabad.