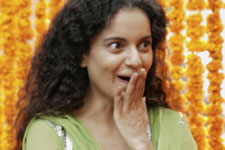 Nupur Barua / fullhyd.com
EDITOR RATING
7.0
Performances
Script
Music/Soundtrack
Visuals
8.0
7.0
8.0
6.0
Suggestions
Can watch again
Yes
Good for kids
No
Good for dates
Yes
Wait for OTT
No
After Cate Blanchett won her Oscar for best female actor this year, she made a relevant, if somewhat garbled, point - the world audience is changing, and people are buying tickets to watch women-oriented films... in short, they make money. Now while that is true of the Western world and their cinema, the same cannot be said of Indian films. Of course there is a Vidya Balan, but her solo journey was short-lived. Vikas Bahl then takes a huge risk with Queen, the story of a single girl and her coming of age.

Rani (Kangna Ranaut) is besides herself with joy at her mehendi ceremony. She is about to get married to Vijay (Rajkummar Rao), recently returned from London. He has chased her for four years, and she has finally given in. Her family in Rajori, Delhi, is ecstatic, too, because isn't this what every daughter should be doing - finishing her studies and marrying?

And then Rani gets a message from Vijay to meet with him at a coffee shop, only to tell her that he cannot marry her after all. A shattered Rani goes home to a sympathetic family, but she does not want to wallow in self-pity for too long. Instead, since the honeymoon reservations have not been cancelled, she flies to Paris on her own. And slowly discovers herself.

In Paris, she meets with a hotel maid, Vijaylakshmi (Lisa Haydon), a single mother who has a string of flings. It is easy for Rani to call her Vijay, and the two become friends as the latter shows her the fun things to do in Paris. From being mugged to getting drunk, Rani does it all, and then leaves for Amsterdam on the next leg of her journey. There, she lives in a hostel for a while, makes three very good friends, Oleksander a.k.a Olik (Mish Boyko) from Russia, Tim (Guitobh Joseph) from France, and Taka (Jeffrey Ho) from Japan. In general, she has a whale of a time.

The story begins with a few stereotypes of Delhi middle class society (for instance, the Punjabi mithaiwalla), and continues to find stereotypes along Rani's journey - from the caricaturish Japanese to the sudden patriotism in Rani. That makes the screenplay more predictable than one would have liked, but since it is also a coming of age movie, maybe these characters help you focus on Rani's metamorphosis rather than other complications. It is her story, only, and nobody else goes through a change in the plot.

Her new relationships are smooth, and politically correct - sample this: her trio of friends in Amsterdam comprise one Caucasian, one Black and one Oriental character. Quite an assortment, and too much to handle for an Indian girl who does not know any other community except the Punjabis and other North Indians.

Certain sequences in the film may seem unnecessary to the screenplay - these are more devices to lead to certain resolutions in the story, and sometimes the convolution is evident. The dream sequences and flashbacks provide an insight into the character that Rani is, and effectively so.

Through it all, however, you never lose track of the protagonist and her adventures as a solo traveller in a strange land. She has it a little too easy for somebody who has never stepped foot out of Delhi without her family, and she adapts quickly to absurd situations, which is pretty out of character in the beginning, but you get used to it as the story progresses.

The dialogues are the high point of the movie, and the multilingual interactions between various characters add unexpected humour to the movie. The movie is realistic, in most parts, and a complete riot.

Kangna Ranaut is a star, and she proves it with this movie. There may be some criticism on her portrayal of a middle-class Delhi girl, but that can be overlooked, because she is just so convincing, and relatable, as the naive, pretty thing lost in translation in Europe. You cannot take your eyes off her for even a second. This role has redefined her as a serious actor, and she deserves all the applause for bringing Rani's character to life.

Lisa Haydon almost steals Kangana Ranaut's thunder in her small role - almost. The leggy model with clothes that leave little to the imagination is as fascinating to the audience as she is to Rani's father and brother.

Rajkummar Rao is perfect as the intensely unlikeable, obnoxious fiancé. Mish Boyko, Jeffrey Ho, and Guitobh Joseph are just the kind of friends you wish you had, and one can see why Marco Canadea makes the ideal guy for Rani to be crushing on. Rani's family members in Delhi are perfectly cast, and they do a commendable job in complementing Rani's character.

The production and costume designs are a bit staid, and that is forgiveable because you are so busy following Rani's emotional journey. The character changes her attire a bit, but to go from conservative kurtis to plunging necklines without blinking seems a bit implausible for her.

The cinematography does not experiment much with the sets and locations, and what you get instead is almost stock footage of the cities of Paris and Amsterdam. The movie is slightly too long, and some of the contrived plots could have been done away with.

The music, on the other hand, by Amit Trivedi, is more than enjoyable. It is apt and memorable.

Of course you have to watch Queen. There is no reason to skip it, and it is a very entertaining movie. Did you know that Kangana Ranaut has written her own dialogues for this one? Take your whole family for the ride, and make sure you sit through the very interesting end credits as well. Kangna Ranaut and heroine-centric movies are here to stay, and the sooner you embrace this phenomenon, the easier it will be for you to proclaim yourself a true film buff.
Share. Save. Connect.
Tweet
QUEEN SNAPSHOT 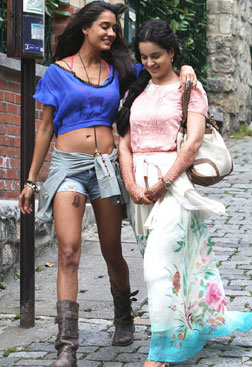 ADVERTISEMENT
This page was tagged for
Queen hindi movie
Queen reviews
release date
Kangana Ranaut, Rajkummar Rao
theatres list
Follow @fullhyderabad
Follow fullhyd.com on
About Hyderabad
The Hyderabad Community
Improve fullhyd.com
More
Our Other Local Guides
Our other sites
© Copyright 1999-2009 LRR Technologies (Hyderabad), Pvt Ltd. All rights reserved. fullhyd, fullhyderabad, Welcome To The Neighbourhood are trademarks of LRR Technologies (Hyderabad) Pvt Ltd. The textual, graphic, audio and audiovisual material in this site is protected by copyright law. You may not copy, distribute, or use this material except as necessary for your personal, non-commercial use. Any trademarks are the properties of their respective owners. More on Hyderabad, India. Jobs in Hyderabad.