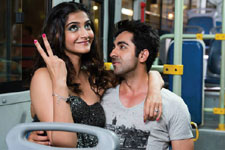 Nupur Barua / fullhyd.com
EDITOR RATING
5.0
Performances
Script
Music/Soundtrack
Visuals
5.0
4.0
5.0
6.0
Suggestions
Can watch again
No
Good for kids
No
Good for dates
Yes
Wait for OTT
Yes
Yashraj Films needs to live up to its reputation, therefore the invasion of rom coms in our theatres recently. Rom com, as opposed to family dramas in which the entire family and many villains with weird motivations would be involved. The production house is giving us, the audience, what it thinks we need, or want, and this is much appreciated, of course. Finally, Indian cinema has variety. The problem then is the part where everybody tries too hard to remain true to Hollywood-inspired sensibilities - not everybody can pull it off, and director Nupur Asthana is no exception, although she did a fine job with her previous film, Mujhse Fraaandship Karoge.

The story begins with Mohit (Ayushmann Khurrana), a young executive with an airlines company, learning how to drive a car. So far, he has made do with his two-wheeler, because that is the most convenient mode of transport for a young man in a crowded city. However, things are about to change - he is due for a promotion, and his girlfriend, Mayera (Sonam Kapoor), is expecting him to propose. He needs to get his act together, and start living like an executive.

Mayera wants Mohit to ask her father for her hand. Her father, V K Sehgal (Rishi Kapoor), is old-fashioned that way, and he expects Mayera to marry the man he chooses. Mayera just wants to convince her father that Mohit is as good a match as any. V K does not seem to think so. An IAS officer one month away from retirement, V K does not mince his words, and loves to throw names around.

He decides to investigate Mohit's background, and tells the hopeful lover that he is on probation. Mohit then spends all his time trying to impress V K one way or another. When recession hits the airlines industry and Mohit is out of a job, he keeps up pretences just so that V K does not have second thoughts about him.

However, Mohit soon runs out of money and job offers, and it hurts his pride to be so dependent on Mayera, who works with a bank, and to constantly lie to V K about his career. This takes a toll on the romance.

The intention of the filmmakers is clear - make a movie that is relatable. Which this story is. Everybody has his or her share of insecurities when it comes to jobs and careers, and the present financial condition of the country makes this a perfect time to release a relevant Bewakoofiyaan.

The story is simple enough, and there are no dramatic revelations or complications. In fact, the title probably suggests the stupidity of the characters because they insist on pursuing the good life but forget to pause for happiness. The dialogues and humour are not over the top, and there are no unnecessary plot points (except for the sequence of the Rajasthan holiday - if the director wanted to emphasise Mohit's carelessness with money, she could have done it in a less obvious manner).

The movie begins entertainingly enough, but somewhere after interval, the characters begin to behave erratically - the financially and emotionally secure Mayera wants to shift countries, the ambitious Mohit does not realise how much money he is spending, and the retired V K becomes a romantic. This not only makes the end very predictable, but rather dull and unexciting. The movie has neither a character-driven plot nor a plot-driven character, and this vagueness in definition of genres is unsettling.

However, the movie could have still been a great entertainer, if the actors had put more soul into their roles. Sonam Kapoor is flat - that is the only word that comes to mind when you see her. She wears great clothes and she has some of the best lines, but it is obvious that she does not relate to the character of a mature girlfriend and daughter. She seems petulant and without much enthusiasm. In fact, she seems to put off both her co-stars on screen. While she tries to be the chirpy but no-nonsense daughter, it looks like Rishi Kapoor has still not forgiven her for her criticism of Ranbir Kapoor on Karan Johar's chat show a few years ago.

Ayushmann Khurrana tries his best to be Mohit. In a recent interview, the actor had said that he identifies with this character more than he does with his character in Vicky Donor. However, towards the end, like Mohit, Ayushmann loses his sheen. Special mention must be made here of the complete lack of chemistry between Mohit and Mayera.

Rishi Kapoor is always a joy to watch, but he seems confused about where his character is headed. He is hilarious in the first half, but, like Ayushmann, loses interest towards the end.

The setting is ambiguous - the city could be either Delhi or Mumbai, or any other metropolitan. The lack of a defined space or locality makes the movie devoid of life and character, to a large extent.

Ditto for the costumes. While Sonam Kapoor is impeccably turned out, for example, the clothes do nothing for Mayera. Rishi Kapoor is the only one who slips into his identity with the clothes picked out for him.

The cinematography and editing are decent, as is the music, but nothing to write home about.

If your mind wanders to other topics while you are watching the movie, you are not to blame for your lack of concentration. After last week's releases, this weekend seems a little dull and lifeless. Not that Bewakoofiyaan is a bad movie. It just needed some soul, and maybe a different heroine. Watch it for Rishi Kapoor, though.
Share. Save. Connect.
Tweet
BEWAKOOFIYAAN SNAPSHOT 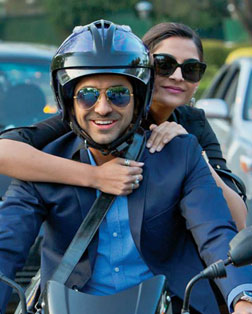 ADVERTISEMENT
This page was tagged for
Bewakoofiyaan hindi movie
Bewakoofiyaan reviews
release date
Ayushmann Khurrana, Sonam Kapoor
theatres list
Follow @fullhyderabad
Follow fullhyd.com on
About Hyderabad
The Hyderabad Community
Improve fullhyd.com
More
Our Other Local Guides
Our other sites
© Copyright 1999-2009 LRR Technologies (Hyderabad), Pvt Ltd. All rights reserved. fullhyd, fullhyderabad, Welcome To The Neighbourhood are trademarks of LRR Technologies (Hyderabad) Pvt Ltd. The textual, graphic, audio and audiovisual material in this site is protected by copyright law. You may not copy, distribute, or use this material except as necessary for your personal, non-commercial use. Any trademarks are the properties of their respective owners. More on Hyderabad, India. Jobs in Hyderabad.