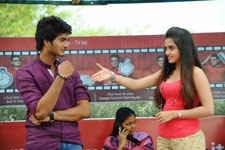 Ravi Kandala / fullhyd.com
EDITOR RATING
1.0
Performances
Script
Music/Soundtrack
Visuals
1.0
1.0
1.0
1.0
Suggestions
Can watch again
No
Good for kids
No
Good for dates
No
Wait for OTT
No
Choices... choices. Would you believe that we at fullhyd.com are often spoilt for choice? This reviewer received a call this morning where he was given a choice of three movies, the titles of which were Cut Chesthe (!), Present Love and Nuvve Naa Bangaram. Imagine the difficulty we had in making the choice. We then watched the theatrical trailers of all three movies, and made an informed decision to watch Nuvve Naa Bangaram (the choice was partly influenced by the fact that the movie was playing in our holy grail - Sri Mayuri).

Nuvve Naa Bangaram has a hero, Sai Krishna, who does not seem to be out of college yet. The heroine Sheena Shahabadi is short in stature, and wears clothes that match her stature. She also seems short of age. The remaining actors, except the parent roles, are all essayed by teenagers and school kids who are probably barely out of their teens. Now that we know about the awesome cast of this flick, let's get to the storyline.

Surya (Sai Krishna) is a mechanic in a TVS showroom, who owns an Apache bike (TVS must really be taking care of its employees!). He is in love with a girl Saru (Sheena Shahabadi), who talks to him over the phone. He has not seen her ever, and keeps pleading with her to meet him. Saru keeps making and breaking promises while telling her friends that she loves him. When her Dad tells her that he's found a match for her, she immediately agrees to the match.

She then meets Surya with the moniker Harika, and befriends him. She also introduces him to her fiancée. Even as she gets ready for her wedding, she continues talking to Surya over the phone. Why does our heroine have two names? Why does she talk to Surya while getting ready for another wedding? What happens to our innocent lover boy hero who trusts the voice on the phone blindly? Does the movie match up to the awesome standards set by Sri Mayuri? These are the questions answered in the remaining movie.

The film moves without aim or purpose, and has random scenes with some terribly vulgar jokes inserted at regular intervals. The characters utter the same dialogues over and over again, giving us no chance to complain about inconsistency in writing. The hero's punchline is that he cannot take two things lightly - one being his career and the other being his love - leaving us with no chance to complain about this character misguiding youth (irrespective of the fact that it is mostly misguided youth that wander into theatres screening such movies).

Coming to acting, we've surely seen better in college plays. Both the hero and heroine compete with each other in putting up blank faces while the seniors go through the motions.

The music is ho hum. The producers took the leads to Malaysia to shoot two songs. Interestingly, they did not seem to have the resources to take a choreographer along. The leads show some dance moves which they seem to have come up with at random and make for funny viewing.

Everyone involved in the movie was clearly clueless about it, and we pronounce our judgement - the movie does not live up to the awesome standards of our holy grail.
Share. Save. Connect.
Tweet
NUVVE NAA BANGARAM SNAPSHOT 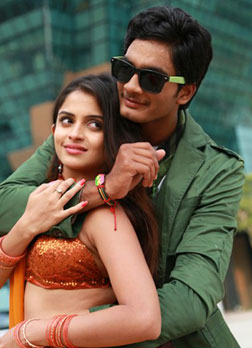 ADVERTISEMENT
This page was tagged for
nuvve naa bangaram full movie watch online
Nuvve Naa Bangaram telugu movie
Nuvve Naa Bangaram reviews
release date
Sai Krishna, Sheena Shahabadi
Follow @fullhyderabad
Follow fullhyd.com on
About Hyderabad
The Hyderabad Community
Improve fullhyd.com
More
Our Other Local Guides
Our other sites
© Copyright 1999-2009 LRR Technologies (Hyderabad), Pvt Ltd. All rights reserved. fullhyd, fullhyderabad, Welcome To The Neighbourhood are trademarks of LRR Technologies (Hyderabad) Pvt Ltd. The textual, graphic, audio and audiovisual material in this site is protected by copyright law. You may not copy, distribute, or use this material except as necessary for your personal, non-commercial use. Any trademarks are the properties of their respective owners. More on Hyderabad, India. Jobs in Hyderabad.