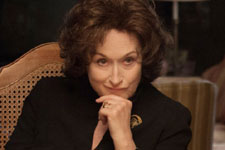 Nupur Barua / fullhyd.com
EDITOR RATING
7.0
Performances
Script
Music/Soundtrack
Visuals
8.0
7.0
7.0
8.0
Suggestions
Can watch again
Yes
Good for kids
No
Good for dates
Yes
Wait to rent it
No
A popular play is always a good place to start when you want to write a screenplay for a movie. And when the playwright himself is the scriptwriter, you know you have a winner, as August: Osage County has proved recently. The content gets that much more importance when you learn that the original work received the Pulitzer Prize for Drama in 2008. And of course, other trivia should include the Oscar nominations for the movie, and the fact that it has Meryl Streep and Julia Roberts playing mother and daughter.

Beverly Weston (Sam Shepard) has hired a Native American caretaker named Johnna (Misty Upham) to look after his wife Violet (Meryl Streep), who has mouth cancer. He explains to Johnna that he is an alcoholic, and Violet is addicted to her various pills. And then he disappears, which is when their eldest daughter Barbara (Julia Roberts) lands up with her estranged husband Bill (Ewan McGregor) and their teenage daughter Jean (Abigail Breslin).

Barbara's sister Ivy (Julianne Nicholson) lives closest to her parents, so she is a source of support to her mother already. Violet's sister Mattie Fae (Margo Martindale) and her husband Charles (Chris Cooper) also drop in to give their moral support.

This is when secrets spill out, interpersonal relationships are laid bare, and shocking confessions are made. There is so much going on between the relatives that the funeral becomes the starting point of a broken family. Barbara tries to keep it all together, but she fails miserably when she realises that some thing in life, such as stubborn old mothers and bitter sisters, cannot be helped.

Written pretty much along the same lines as the original play, the story is divided into three acts. As each act gives way to an increase in intensity between the characters, you realise that this is actually a combination of a Eugene O'Neill play and a Greek tragedy. To say more would be to give away the action (all of which takes place inside the rambling house that Violet lives in), but suffice to say that the lives of all the characters change in varying degrees, depending on revelations that are relevant to their lives.

The dialogues are so hard-hitting that they are almost funny, but your heart breaks a little for each character, as they try to make sense of the latest development in their existence - the death of a man they all loved, despite his faults.

The script brings out despair and helplessness in relationships and situations, and you just hope that at least one character gets a shot at happiness later. The story lingers in your mind long after the movie is over.

Creating a contemporary Oklahoma is not as easy as it would seem. The production and costume designers stick to opulent interiors, almost, and unglamorous clothes, to bring out the contrast between the inhabitants of the area and the past that they cling so desperately to. The soul-stirring music of Eric Clapton in the background, as well as the background score, enhances the setting.

The cinematography captures perfectly the desolation of the hot plains in the summer, and repeats shots of vast tracts of open land to emphasise this. The editing is near perfect, and there is no scene that drags on endlessly, despite the high drama.

Meryl Streep and Julia Roberts are exquisite in their portrayals of their respective characters. They could easily be mother and daughter. The rest of the cast support them ably, but special mention has to be made of Abigail Breslin, who has come a long way since Little Miss Sunshine - she could have done with some more screen time. The man who steals the show, almost, is Chris Cooper, with his tragic face.

There is a lot that is missing in August: Osage County, but the drama keeps you riveted. The references made to incest, paedophilia, racism and extra marital affairs may not be easy to digest - in fact, some allusions are downright cringeworthy - but it is a realistic portrayal of a dysfunctional family and that may find resonance in the lives of many people across the world. It is a timeless classic, and a must-watch this weekend.
Share. Save. Connect.
Tweet
AUGUST: OSAGE COUNTY SNAPSHOT 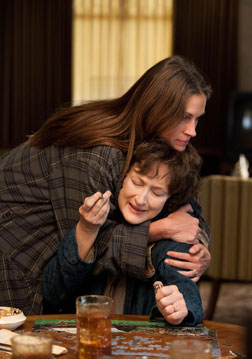 ADVERTISEMENT
This page was tagged for
August: Osage County english movie
August: Osage County reviews
release date
Meryl Streep, Julia Roberts
theatres list
Follow @fullhyderabad
Follow fullhyd.com on
About Hyderabad
The Hyderabad Community
Improve fullhyd.com
More
Our Other Local Guides
Our other sites
© Copyright 1999-2009 LRR Technologies (Hyderabad), Pvt Ltd. All rights reserved. fullhyd, fullhyderabad, Welcome To The Neighbourhood are trademarks of LRR Technologies (Hyderabad) Pvt Ltd. The textual, graphic, audio and audiovisual material in this site is protected by copyright law. You may not copy, distribute, or use this material except as necessary for your personal, non-commercial use. Any trademarks are the properties of their respective owners. More on Hyderabad, India. Jobs in Hyderabad.