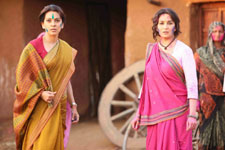 Nupur Barua / fullhyd.com
EDITOR RATING
5.0
Performances
Script
Music/Soundtrack
Visuals
7.0
5.0
5.0
6.0
Suggestions
Can watch again
No
Good for kids
No
Good for dates
Yes
Wait to rent it
Yes
Once upon a time, not too long ago, Madhuri Dixit and Juhi Chawla were rivals, and in true Bollywood fashion, never attempted to become friends. Almost two decades later, both have had their share of roles that do not require them to run around trees, nor play the victim. When they were cast together in Gulaab Gang, they discovered, to their surprise, that they actually get along pretty well. So many wasted years, but worth it all to see them together in a movie that revolves only around them, and not some hunk that they are in love with, etc.

However, despite the brouhaha surrounding the release of the movie that now has a disclaimer (that it is not based on the life of Sampat Pal), the overall experience of watching two big stars of the 1990s is a tad disappointing. And here is why.

The story is set in an obscure village somewhere, probably the North of India, given the confused dialect. Rajjo (Madhuri Dixit), we are told, was a rebel as a child - she dared to defy her stepmother and went ahead and learned the alphabet. Now, she runs an ashram for destitute women, and also teaches, for free, little girls of the village.

The women make sarees and spice masalas, but there is more to them that that. They are also vigilantes, of sorts, led by the undaunted Rajjo. They are called the "Gulaab Gang", and they all wear pink sarees. Whenever the villagers have a problem, Rajjo refers to her parched throat, which is a reference to her women to bring out their rods and sickles and attack the perpetrators of injustice.

While Rajjo is busy doing her bit for society, and gaining goodwill, she is largely unaware of a shrewd, ambitious widow named Sumitra Devi (Juhi Chawla), who is trying to win votes these days to fill the shoes of her late politician husband (who died under mysterious circumstances).

Sumitra's representative in the village, a certain Pawan, asks Rajjo for her support to win the elections. Pawan's son, however, rapes a young minor, and when Rajjo turns to Sumitra for help, the latter offers monetary compensation. Rajjo then decides to make an enemy of the wily Sumitra, and the face-off begins.

It is a fascinating concept, to be sure, to pitch two women against each other and not have any catfights. Instead, Rajjo and Sumitra engage in a game of wits, as it were, where they both stare at each other with piercing intensity, and their goons and followers do the rest. However, while Rajjo jumps into the fray when it comes to beating up the baddies (with much gusto), Sumitra prefers to spout philosophy and scheme from her high-back chair.

The problem lies in the flow of the screenplay - the sequences do not seem to be stitched well together, although you do get an idea of where the story is headed. There are certain sequences that carry on forever, and take time to resolve, but there are more sequences that are inserted abruptly into the story and seem unrelated to the rest of the film.

The director wastes time when he narrates the obvious, but intersperses sequences with scenes that have no explanation, hoping that we are clever enough to understand. This yo-yoing style of narration can leave the audience a bit disoriented.

The issues that the women fight against are trivialised, and seem like a prequel that will eventually head towards the rivalry between the two women. The climax, when it comes, is a mish-mash of emotions and motivations that leave you bewildered, not because there is a twist in the tale, but because the resolution is not satisfactory.

The dialogues are hard hitting, considering that it is mostly men who speak the way these two women do, but they are the only aspect of the movie that allows you to keep your sanity. On the other hand, some of the other characters have inane, stereotypical lines allotted to them, and they can get annoying.

The humour is forced, and the bonhomie between the women living in the ashram is not very convincing - realistically, it is near impossible to live in perfect harmony when each person has such strong views on the world in general and on their individual self worth in specific.

Madhuri Dixit is luminous in the movie. She shines in her role - watch out specifically for her walk in slow motion, and her action sequences in which she draws enough blood to shame, collectively, the Singhams and Dabanggs of the industry (although the wire work is pretty evident in slow motion). Her dance moves, though, are a bit restrained, but she still has enough screen presence to make you keep your eyes on her, and her alone. She is let down by a sketchy brief of her role, but she does her best to let you forget that the movie is actually pretty average.

Juhi Chawla, on the other hand, is mesmerising. When the two lead actors are on screen, your eyes automatically shift to her. She has better dialogues, and her depiction of an evil woman is bang on. Those big eyes that filmmakers have exploited so often to showcase innocence and naiveté now penetrate your soul and scare you.

The supporting cast is able, but special mention needs to be made of Tannishtha Chatterjee, Vinitha Menon, Priyanka Bose, and especially Divya Jagdale (tomboyish, temperamental and totally rustic in her role).

The location that the movie is shot in, Wai (Maharashtra), is familiar and therefore not very exciting. The costumes are rather plain, although Juhi Chawla's get-up is perfect. The cinematographer uses too many shots of the river, because he can, and opening shots in sequences become repetitive.

The movie could have been shorter, and the disorientation mentioned above is a result of some lazy editing.

Also, the music is distracting - the background score tells you what you should be feeling in that moment, and there are too many songs that distract you from the story.

Gulaab Gang is a disappointment, but it is an important movie, to be sure. For one, it brings to us the two rivals of a bygone era, whose performances alone are worth watching the movie for. Secondly, a women-oriented movie is in vogue now, and these women beat up and fight, too. It could have been a masala movie, were the roles to be played by men. Try not to miss the opening credits, and the end. Between those and the two lead actors, Gulaab Gang salvages itself and makes it a movie worth watching. Otherwise, there is always Queen.
Share. Save. Connect.
Tweet
GULAAB GANG SNAPSHOT 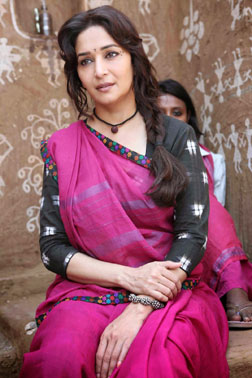 ADVERTISEMENT
This page was tagged for
gulaab gang full hd movie online filmywap
Gulaab Gang hindi movie
Gulaab Gang reviews
release date
Madhuri Dixit, Juhi Chawla
Follow @fullhyderabad
Follow fullhyd.com on
About Hyderabad
The Hyderabad Community
Improve fullhyd.com
More
Our Other Local Guides
Our other sites
© Copyright 1999-2009 LRR Technologies (Hyderabad), Pvt Ltd. All rights reserved. fullhyd, fullhyderabad, Welcome To The Neighbourhood are trademarks of LRR Technologies (Hyderabad) Pvt Ltd. The textual, graphic, audio and audiovisual material in this site is protected by copyright law. You may not copy, distribute, or use this material except as necessary for your personal, non-commercial use. Any trademarks are the properties of their respective owners. More on Hyderabad, India. Jobs in Hyderabad.