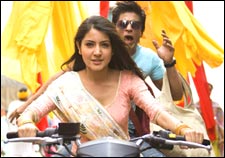 If you were a bride, and if today was your wedding day, what would you do when the entire (and that means entire) groom's party gets killed in an accident, your professor dad has a heart attack, and his last wish is that you get married to his favourite student? One option is to do as he says, right after the day he gets cremated of course, and hope that, for all the heartache, there is indeed an SRK under that wig, those thick-rimmed spectacles, and the moustache.

So, after marrying the vivacious Taani (Anushka), orphaned and cruelly left alone at the altar, the extremely unexciting Surinder Sahni (SRK) takes her to his home to Amritsar. Surinder is head over heels in love with this woman, but isn't the expressive kind at all. Meanwhile, she tells him that she'll try and be a good wife to him but that she could never fall in love with him. So she cooks, packs his lunches and goes for movies with him, but man and wife sleep in different rooms and dine at opposite ends of the 8-seater dining table.

A dance competition excites her, and Surinder decides to enter, too, in order to woo her as a different man. 2 SRKs for the price of one, you think, and you're hoping you'll see some real romance - you know, the melting eyes, the heart-stopping loopy grin, the funny one-liners, the hugging, the sniffing, the dancing, the "all's well when SRK's around" thingâ€¦ mmmmâ€¦

Yawnticipation sets in, as you keep hoping for an SRK somewhere under all that weedy gelled hair, those hideous T-shirts, the tight jeans and that walk of a man with roaches in his pants. Shamelessly calling himself Raj, the second SRK impostor walks in, clumsily flirts with Taani and tries to learn dancing.

Surinder begins to wonder if it's a good thing at all that Taani starts taking a liking to Raj the entertainer. In the second half, he tries to end Raj's role, but Taani needs him for the dance competition, and pretty soon, Raj is taking her to hilltops and coordinating power cuts so Amritsar's lit houses can spell I Love You.

Suri tries to get her attention (in the process, fights the Sumo wrestler at a trade fair), but comes to terms with the fact that Taani is even ready to elope with the character he created, leaving her husband behind, and he gets ready for the same. However, finally, finally, Taani sees Rab in her husband, and finally, finally, finally, there's that SRK moment you've been waiting ages for.

The idea of donning an alternative personality to court someone, and then having to choose between your personas to decide which one you'll keep and which one you'll discard, could have been engaging emotional material, but why is it that even King Khan isn't able to keep this film above sea level? It takes quite a bit for a film to turn out this way. It is notable that even this does not stop Khan from his Hrithik Roshan takeoffs.

The pleasant-looking Anushka is pretty good as an actress, but too mild to be either Khan's or YRF's heroine. Vinay Pathak plays Surinder's hair-dresser friend, and he and SRK seem like they exchanged their regular onscreen personalities; unfortunately, the latter just cannot carry off the average working-class boring look, which is very ironic, seeing as he started out with all those brilliant common-man roles.

Pathak wears colourful and tight clothes, and has a few comic dialogues, but for most of the film, is relegated to asking Surinder when he will put an end to the double role. However, he's the one who gets to hug and cry with SRK.

All the actors are whispering, and the dialogues are trite. No extremely appealing visuals, either, with the film being shot in what we're told is Amritsar; the Golden Temple is the only thing picturesque in the film. But SRK sporting two totally unflattering looks, might be the real put-off. The songs touch your heart, and have some great choreography, and at the risk of inserting a spoiler, there are the customary special appearances by you-know-who-all in one of the songs.

Rab Ne Bana Di Jodi is not worth your effort at all - the King Khan festival on Set Max is surely a better way to fall in love with Raj or Rahul this season.
Share. Save. Connect.
Tweet
RAB NE BANA DI... SNAPSHOT
RAB NE BANA DI JODI SNAPSHOT


Pros: Vinay Pathak and the haule haule song
Cons: too many

RATING
5
The Imtiaz on 26th Dec 2008, 1:12pm | Permalink
Movie is all about one's expectation from Husband or Wife. Overall a Good Script touching Husband and wife's sentiments and expectations. Excellent Movie!!!

Shraukh's acting is too good as Raj "Macho Man"...but as Surinder Sahni (Not too impressive, If you think script wise...this character is must.)

RATING
3
XLNC Aditya on 18th Dec 2008, 5:19pm | Permalink
Barely fifteen minutes in when Surinder Sahni marries Taani the movie was doomed... we had seen these kinda movies before and that too in a movie starring Rajpal Yadav(RY) called Mein Meri Patni Aur Woh...and SRK being compared to RY is something only Aditya Chopra could think of!!

Anyways, Mr.Sahni plays a dumb character who doesn't talk to his wife coz he's kinda shy and not the flirty type...but when suddenly he appears as Raj and woos the wife we start asking questions...

Then instead of being Raj and living happily ever after he wants Taani to love Sahni who doesn't even care for the damn female... so when in the end she kinda dumps Raj for Sahni... we wake up from our slumber to find the what should have happened 2 and half hours ago running on screen coz for those who saw the movie...she says she's marrying Sahni with her own free will and not becoz her father forced her...

So all we get to see in this movie is SRK playing a psycho who wants the female to love a dumb guy instead of the cool guy although both are same...LAME!!!!

The songs are pretty good but are speed breakers or increase the length... all in all my point of view... WAIT FOR GHAJINI!!! Remember Dec. 25th!!


Pros: one song, vinay pathak, an over acting srk whom many females will like and a photo slideshow at the end of the movie!
Cons: SRK (aka Surinder Sahni), length, story, cliched, aditya chopra

RATING
5
blue on 17th Dec 2008, 10:00pm | Permalink
I think I lost my conscience!
Hari on 13th Dec 2008, 8:04am | Permalink
One of unique efforts to show the true love of a human soul and dedication in achieving it quite efficiently. RNBJ is clear entertainer with lots of emotional and funny moments throughout the film and the photgraphy is of high quality. Although couple of songs are noteworthy, the music is pretty average. This could be another hit close to DDLJ and King Khan looks more young and romantic than some of his recent movies like OSOM and Chakde

ADVERTISEMENT
This page was tagged for
hindi movie hd rab ne bana di jodil
rab ne bana di jodi full movie
Rab Ne Bana Di Jodi hindi movie
Rab Ne Bana Di Jodi reviews
release date
Follow @fullhyderabad
Follow fullhyd.com on
About Hyderabad
The Hyderabad Community
Improve fullhyd.com
More
Our Other Local Guides
Our other sites
© Copyright 1999-2009 LRR Technologies (Hyderabad), Pvt Ltd. All rights reserved. fullhyd, fullhyderabad, Welcome To The Neighbourhood are trademarks of LRR Technologies (Hyderabad) Pvt Ltd. The textual, graphic, audio and audiovisual material in this site is protected by copyright law. You may not copy, distribute, or use this material except as necessary for your personal, non-commercial use. Any trademarks are the properties of their respective owners. More on Hyderabad, India. Jobs in Hyderabad.