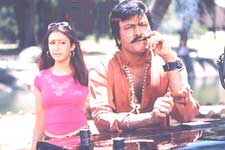 EDITOR RATING
3.0
Performances
Script
Music/Soundtrack
Visuals
NA
NA
NA
NA
Suggestions
Can watch again
NA
Good for kids
NA
Good for dates
NA
Wait for OTT
NA
Watching Adhipathi is a learning experience, and here is some of our learning: There are lots of other things as well for dutiful enough pupils, but we'll stop here and try to exercise our other analytical skills. Like you will soon appreciate, there is lots of that needed here.

Yogendra (Mohan Babu) is the son of Honest Man Justice Panduranga Rao (Vijay Kumar). Yogendra is the IAS topper (the way the movies churn these out, you'd wonder there isn't one in every street), and in a party that he throws for his friends to celebrate it, is trapped in a murder case. You guessed it - Honest Man is the judge of the case, and yes, Honest Man stays honest and throws son in jail.

Yogi emerges from prison like it were Krypton, and can now beat up 40 people single-handedly - and he doesn't even have to wear his underwear on the outside, women flip nevertheless. Somebody really should do a gene test on him - many future generation men will benefit.

As you may expect, Yogi wants revenge (a feeling echoed by your own mind as the film progresses, but we'll get to that later). Since the movie needs a story to make things tough for him, it so transpires that his dad has fathered a kid out of wedlock too, and the bad men get to know of this. There's joy and ecstasy all around that camp, especially since Honest Man is all set to become the Chief Justice of India.

Honest Man decides to exercise the dishonesty option at this juncture (well, everyone needs a change), and denies he's fathered anyone (out of wedlock, that is - now let's not disrupt Yogi's sense of security too). Yogi gets to know from alternate sources that Honest Man indeed gave him a bonus sister, and decides to adopt her that, much to dad's chagrin.

The sister now gets killed, and Honest Man is cleverly implicated - the bad men are particularly good at doing this, as they've demonstrated already. The only witness is killed, and Yogi is lost for ways out to save dad. Same with the movie too at this late stage, and so in comes star no. 2!

Jaganmohan (Nagarjuna) is a leading criminal lawyer (we know because he keeps saying so) and is the best friend of Yogi - so much so that he leaves a marriage midway (his) to rush to Yogi's side. In our humble opinion he could've completed the marriage and still had considerable time to spare, but who cares for our opinion (sniff... sorry). Anyway, the case is argued in an unarguably unbrilliant way, and the bad men are defeated. And, like we started out saying, you leave the theater a sadder but wiser man.

Now for the performances. The film has a popular starcast, all in roles they'll want to be forgotten quick if they want to stay popular. Mohan Babu can act, of course, but that thing is better when done in good films. He keeps beating people up and making lewd comments in the movie (how humorous do you find him saying "dimpaalsina vaadini nene" to the heroine?), and apart from some signature dialogues, that's about it. Incidentally, if you are planning to go with your family to this one, it would have to be a very progressive and liberal family indeed.

Preeti Jhangiani fills the opening for flesh in the movie. Nagarjuna came in either because he owes Mohan Babu a favor or because he thought this would be a Damini-esque Sunny Deol-esque role. If it's the former, this is a forgettable way of repaying it, and if it is the latter, a regrettable decision. Kota will only kill his career if he does insignificant roles like in this one. Mukesh Rishi is your run-of-the-mill villain and none of the rest is worth any comment. As for the music, you could've composed it yourself if given the instruments and some practice.

You'd need to be tougher than the toughest to appreciate this, so make the choice.
Share. Save. Connect.
Tweet
ADHIPATHI SNAPSHOT

ADVERTISEMENT
This page was tagged for
Adhipathi movie
Adhipathi telugu movie
Adhipathi reviews
release date
Mohan Babu, Preeti
Follow @fullhyderabad
Follow fullhyd.com on
About Hyderabad
The Hyderabad Community
Improve fullhyd.com
More
Our Other Local Guides
Our other sites
© Copyright 1999-2009 LRR Technologies (Hyderabad), Pvt Ltd. All rights reserved. fullhyd, fullhyderabad, Welcome To The Neighbourhood are trademarks of LRR Technologies (Hyderabad) Pvt Ltd. The textual, graphic, audio and audiovisual material in this site is protected by copyright law. You may not copy, distribute, or use this material except as necessary for your personal, non-commercial use. Any trademarks are the properties of their respective owners. More on Hyderabad, India. Jobs in Hyderabad.