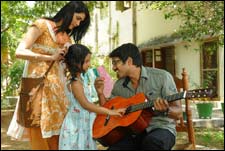 Deepa Garimella / fullhyd.com
EDITOR RATING
2.0
Performances
Script
Music/Soundtrack
Visuals
5.0
2.0
4.0
4.0
Suggestions
Can watch again
No
Good for kids
No
Good for dates
No
Wait to rent it
No
Ho hum. Another week, another film that didn't have a budget but that anxiously wants to drive home the one all-important point - kill the bl**dy Pakistanis, and avenge Gokul Chat (and now, 26/11).

Going by the kind of (lack of) thought out into the plot of Coffee Bar, it's easy to say that even a decent budget cannot have made it a better film. It's a good thing that money was spent on the king-sized hoardings - there could not have been any takers for the flick otherwise.

The film starts out with an ambitious village lad Ramakrishna (Shashank) sets out to Hyderabad in search of a job. Hitch-hiking in a lorry along with him is a kid, who bonds pretty well with Ramakrishna and is to stick with him in the city and become an integral part of the plot.

After thoroughly not impressing his prospective employers by his lack of certificates (which was apparently because his family is so poor he never could afford exams despite having studied all the books that had to be studied), Ramakrishna hangs around with a friend Srujana (Biyanka Desai), with whom he becomes friends despite a ridiculously inane "intro fight". Meanwhile, there is a hint of something nasty and mysterious happening in the backdrop, with an evil voice giving instructions to a photographer.

One day, the broke Ramakrishna is walking around an IT park, when a chance meeting with a filthy rich businessman (Atul Kulkarni) leads to his (Ramakrishna's) taking on a strange challenge. One thing leads to another, and before you know it, a crore of rupees and an evil terrorist plot are involved.

For a flick that does a good job of building up some tension pre-interval, Coffee Bar soon disappoints with its glaring loopholes and some ridiculous twists (like the whole "Chinese" invention involving the latest in bomb technology) .

The thrills die out pretty fast, thanks to some lazy, amateurish editing and bad writing. And at the end of the movie, Ramakrishna just lines up all the Pakistani hoodlums in the city (who, by the way seem to always be extremely vulnerable to small-time ambushes, in these films) and shoots them all, with his friends filming the proceedings.

Shashank is talented, but looks like he needed some better direction. He's confident, and probably deserves some better work. Meanwhile, Biyanka Desai is overshadowed by her dubbing artiste. As for Atul Kulkarni, it's hard to see why he's in this movie. Suman looks way too dignified for this flick.

Also, the cinematography is less than mediocre, and so is the music.

This is a film begging to be ignored. Pay attention.
Share. Save. Connect.
Tweet
COFFEE BAR SNAPSHOT

ADVERTISEMENT
This page was tagged for
Telugu coffe bar songs
coffie day telagu movie actress
Coffee Bar telugu movie
Coffee Bar reviews
release date
Follow @fullhyderabad
Follow fullhyd.com on
About Hyderabad
The Hyderabad Community
Improve fullhyd.com
More
Our Other Local Guides
Our other sites
© Copyright 1999-2009 LRR Technologies (Hyderabad), Pvt Ltd. All rights reserved. fullhyd, fullhyderabad, Welcome To The Neighbourhood are trademarks of LRR Technologies (Hyderabad) Pvt Ltd. The textual, graphic, audio and audiovisual material in this site is protected by copyright law. You may not copy, distribute, or use this material except as necessary for your personal, non-commercial use. Any trademarks are the properties of their respective owners. More on Hyderabad, India. Jobs in Hyderabad.