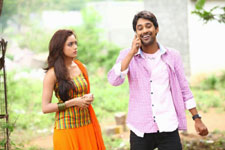 Ravi Kandala / fullhyd.com
EDITOR RATING
3.0
Performances
Script
Music/Soundtrack
Visuals
5.0
3.0
3.0
5.0
Suggestions
Can watch again
No
Good for kids
No
Good for dates
No
Wait to rent it
No
When someone is on a lucky streak, there is a common Telugu proverb used to describe him - that he must've stepped on a fox's tail. If that is true, Varun Sandesh must've stepped on the tails of a few hundred foxes before he made his debut (in Happy Days). There is no other way to explain how he still gets movies and how his movies are released. Even Nitin, whose dad is a producer, struggled to get a few of his films released after a few consecutive flops. But not Varun Sandesh.

The other puzzling factor is how producers decide to greenlight the utterly generic love stories that he stars in. We bet that if you watched ten Varun Sandesh movies, you would notice that the only things that change are the heroines and the supporting actors. Everything else, including the storyline, the songs and the character sketches (LOL!), would match each other so closely that you would be forgiven for assuming that you are binge-watching reruns of the same movie.

Paddanandi Premalo Mari (PPM) is yet another assembly-line love story starring Varun Sandesh, and even releases just before Valentine's Day for good measure. Varun plays Ram, an engineering graduate on the lookout for jobs. Ram sees Sravani (Vithika Sheru) one day while playing football, and falls in love with her promptly. He saves her from a goon soon, and quickly professes his love for her.

The heroine, who seems equally if not more dim-witted, reciprocates immediately. There is a song and then a misunderstanding, and the next thing we know Ram is attending Sravani's wedding. The goon makes a comeback and Ram ends up rescuing Sravani again. The remaining movie is so soporific, it will be a boon for insomniacs.

The film supposedly takes place in Vijayawada, but all the locations shown are in Hyderabad. There are two or three comedy tracks that serve no purpose except to disgust you. One involving a bottle filled with urine is particularly revolting. The director Mahesh Upputuri knows he's making an absolutely formula film, and does not even attempt to be original. The songs, including an item number about Palnadu, are pure bunkum, and the director's grandiose ambitions of picturising them in Krishna Vamsi style just add to the trauma.

The performances are all perfunctory - there does not seem to be one actor taking the whole project seriously.

Paddanandi Premalo Mari is yet another romantic love story featuring Varun without either any of them. Just stay away, and hopefully it'll leave you alone, too.
Share. Save. Connect.
Tweet
PADDANANDI PREMALO MARI SNAPSHOT 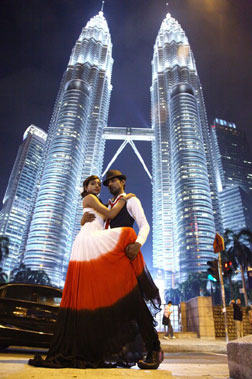