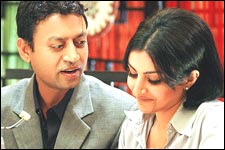 Deepa Garimella / fullhyd.com
EDITOR RATING
4.0
Performances
Script
Music/Soundtrack
Visuals
8.0
6.0
5.0
7.0
Suggestions
Can watch again
No
Good for kids
No
Good for dates
Yes
Wait for OTT
Yes
Shah Rukh in a bunny hat, brandishing a whip, and being called Puchkoo might be closer to grossing you (and him) out than have you rolling on the floor thinking it's the best sex joke of the century. Having Irrfan Khan in his place delivers the laughs, but it still doesn't make the joke any more creative. And how many times have you seen a 'size does matter' joke in Bollywood, and thought it was extremely witty? Rahul Bose doesn't do much for those statistics - if you thought it was witty, you still will, and it works the other way, too.

For those used to western sitcoms, Dil Kabaddi is not exactly a breakthrough, and for regular Bollywood audiences it's earth-shattering (and more). For the accommodating, however, it entertains, and if you're willing to let it, will even reward you with some intelligent depth and deja-vu confrontations, in the midst of all that scandal.

The film is a story of two YUCNKALS (a term we thought long needed to be made up - Young Urban Couple No Kids And Liberated Sexually). Samit (Irrfan Khan) and Mita (Soha Ali Khan) want to halt their dead marriage, to the shock of their best friends Rishi (Rahul Bose) and wife Simi (Konkona Sen Sharma).

Cooking on the Rishi-Simi front are seeds of discontent in Simi, sown by Samit & Mita's separation. She develops a crush on her colleague Vir (the unbelievably delectable Rahul Khanna), who starts falling for Mita. As for Rishi, a professor at film school, he starts flirting with his student Raaga, a girl with this track record of being every 30+ man's plaything.

However, the efforts to be both funny and intelligent are visibly not succeeding. The key sacrifices are the women, who have been reduced to caricatures - Mita's constant bickering always seems overdone, and the attempts at sketching Simi's whiny 'poor me' nature is too textbookish. Kaya's dumbness borders on the nauseating, and Payal Rohatgi's probably trying to make it as unreal as possible by her overacting.

The creakiness of the marriages also feels too contrived. Simi and Rishi initially seem totally at peace with their's, and even when their insecurities creep in, you are never convinced that they are fatal.

The performances are brilliant, with the actors overcoming the shortcomings in script, dialogue and characterization. Of course, the best pick is Irrfan Khan, who gives his character that brilliantly casual naturalism that is unimaginable of anyone else in Bollywood. Rahul Bose disappointingly doesn't get a lot of funny lines, but he and Konkona are great, as usual. Soha Ali Khan seriously needs to be told that no length of bob cuts is going to help if she's not letting go of momma's bouffant and fringes.

You can have fun at Dil Kabaddi, but don't take along anyone who doesn't belong to your generation.
Share. Save. Connect.
Tweet
DIL KABADDI SNAPSHOT

ADVERTISEMENT
This page was tagged for
Dil Kabaddi hindi movie
Dil Kabaddi reviews
release date
Irrfan Khan, Rahul Bose
theatres list
Follow @fullhyderabad
Follow fullhyd.com on
About Hyderabad
The Hyderabad Community
Improve fullhyd.com
More
Our Other Local Guides
Our other sites
© Copyright 1999-2009 LRR Technologies (Hyderabad), Pvt Ltd. All rights reserved. fullhyd, fullhyderabad, Welcome To The Neighbourhood are trademarks of LRR Technologies (Hyderabad) Pvt Ltd. The textual, graphic, audio and audiovisual material in this site is protected by copyright law. You may not copy, distribute, or use this material except as necessary for your personal, non-commercial use. Any trademarks are the properties of their respective owners. More on Hyderabad, India. Jobs in Hyderabad.