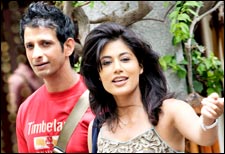 EDITOR RATING
2.5
Performances
Script
Music/Soundtrack
Visuals
4.0
2.5
7.0
6.0
Suggestions
Can watch again
No
Good for kids
No
Good for dates
No
Wait for OTT
No
It's bad if you go late to a very important wedding. It's worse if the wedding is your own. It's disastrous if you discover that the wedding is already happening. For Harsh (Sanjay Suri), it's even worse - someone he's himself invited to his wedding has usurped the bride for himself. His own loving younger brother.

If it's a theme that has you bouncing off all surfaces around you in sheer anticipation, well, there's good news and bad news. The good news is that the makers of this one will think you're quite intelligent, a connoisseur of new age cinema. The bad news is, if you go to a movie whose tagline is "Come fall in love, with your brother's bride" ...okay, let's not get judgemental, and just get to the story instead.

Harsh is a successful investment banker in Mauritius, with a great house, cool car and lovely girlfriend. Most people are happy to have just any one of those, even if on a high monthly installment, so, yes, Harsh is pretty happy. To take his happiness to the next level, he decides to get married, but makes just one mistake - he invites his family for his marriage.

Mom Gayatri (Shabana Azmi) is the lesser of the problems - she just makes his bride Aaliyah (Chitrangda Singh) wish one of the two of them were dead. The bigger problem is his brother Siddharth (Sharman Joshi), who makes Aaliyah wish she could live a 100 years - with him.

To be fair to Siddharth, it's not entirely his fault - he's just being his normal self, which isn't anything great anyway (he's a physicist, and like we all know, nobody who understands physics can be fun). However, we all know about love too - like with sitting on chewing gum, it can happen to anyone anywhere without really planning for it, and the mess is at its worst when you are trying to get it off. Okay, that was a lousy line, but this is a review for a lousy movie.

So love between Siddharth and Aaliyah happens when neither of them is expecting it, but after it does, it's too late. Siddharth goes through the motions of trying to be ethical, but Aaliyah's body helps him overcome his ethics in record time. And very soon they are sleeping all over Mauritius (it's a small place, so the travel isn't an issue).

Siddharth tells Harsh that he and Aaliyah are in love, and first Harsh thinks he's joking - which is admirable since very, very few people can see the humour in the situation like this, and they all have long beards and give lectures on Bhakti TV and Aastha. The truth, however, hits Harsh pretty soon, and so hard, you're sure he's going to be giving lectures on those channels pretty soon anyway.

Sorry Bhai is a pretty lousy movie in execution anyway - there seems no reason Aaliyah should fall in love with Siddharth given the way their interaction is scripted; the performances, especially of Sharman, can't really bring the story to life; and Harsh's character isn't dealt with well enough, especially post the incident - but the bigger problem is the concept itself.

People, especially in India, go to the movies to have a good time, not to see a depressing, and ultimately pointless, movie like this. (Sure, we can have a debate about who decides what is pointless. The answer will be the final judge - the BO collections of this movie.) Sorry Bhai is too avant garde for Indian audiences, even the multiplex crowds. For a people brought up on a diet of Lakshmana's relationship with Sita, this concept is sacrilege, almost incestuous. And even otherwise, who wants to watch a movie where a man loses his beloved? It's to escape that that we go to movies.

Sharman Joshi, Sanjay Suri and Chitrangda Singh all fail to give the kind of performances that would have made the movie stand out for something. Joshi particularly seems to have the same expression all through the movie. And Sanjay, who has to play the man hit by the worst kind of trauma, hardly makes an impact either. Boman Irani and Shabana Azmi do not have brilliantly scripted roles either, but bring what they can to what they have.

The film has a couple of lilting tunes, but is generally languid, with the screenplay lacking in what it takes to bring a primarily emotional tale to life - like we said, the whole chunk of Aaliyah and Siddharth falling in love is hardly convincing, hitting the movie at its basic level. There's a difference between subtlety and vacuousness, and this is an example.

Watch Sorry Bhai if you fancy yourself as discerning and open to ideas, but we'd recommend it more for the privacy that an almost empty theatre offers.
Share. Save. Connect.
Tweet
SORRY BHAI SNAPSHOT

See Sorry Bhai full details
SORRY BHAI USER REVIEWS
1 - 2 OF 2 COMMENTS
POSITIVE  |  NEGATIVE |  NEWEST  |  OLDEST  |  MOST HELPFUL  |  LEAST HELPFUL
USER RATING
7.0
1 USER
Performances
Script
Music/Soundtrack
Visuals
8.0
6.0
6.0
8.0
Can watch again - NA
Good for kids - NA
Good for dates - NA
Wait for OTT - NA
december_rain on 4th Dec 2008, 6:09pm | Permalink
chris, i am sure you on the other hand will demonstrate your excellent emotional depth by not thinking anyone did anything wrong if you some day (still,god forbid) discover your beloved with your brother. you will find it quite progressive, since your moral values are not those of an "orthodox who should be extinct, religious psycho-sauric".

and oh yes i am sure you fully know the meaning of avant garde too and that i am the only one who's not able to understand your meaning there.

ADVERTISEMENT
This page was tagged for
Sorry Bhai hindi movie
Sorry Bhai reviews
release date
Sharman Joshi, Sanjay Suri
theatres list
Follow @fullhyderabad
Follow fullhyd.com on
About Hyderabad
The Hyderabad Community
Improve fullhyd.com
More
Our Other Local Guides
Our other sites
© Copyright 1999-2009 LRR Technologies (Hyderabad), Pvt Ltd. All rights reserved. fullhyd, fullhyderabad, Welcome To The Neighbourhood are trademarks of LRR Technologies (Hyderabad) Pvt Ltd. The textual, graphic, audio and audiovisual material in this site is protected by copyright law. You may not copy, distribute, or use this material except as necessary for your personal, non-commercial use. Any trademarks are the properties of their respective owners. More on Hyderabad, India. Jobs in Hyderabad.