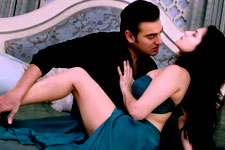 T J Reddy / fullhyd.com
EDITOR RATING
1.0
Performances
Script
Music/Soundtrack
Visuals
1.0
1.0
1.0
1.0
Suggestions
Can watch again
No
Good for kids
No
Good for dates
No
Wait to rent it
No
After Aksar 2 and Julie 2 in the past two weeks, we complete the trifecta of terrible movies with Tera Intezaar. However, while the past two weeks have had a decent movie or two to keep the balance between good and evil, this weekend cinematic evil has finally triumphed. This is that special weekend where a Kapil Sharma film can be called the best of the four films I have watched in theatres. What a time to be alive.

In Tera Intezaar, Arbaaz Khan's Veer is a painter who doubles up as a reclusive genius. Sunny Leone's Raunak is the owner of an art gallery who part-times as his muse. The latter has a group of four no-good friends who work as art dealers. The foursome's plan to achieve riches works like this: (1) we kill the artist who gives us the paintings we sell (2) this leads us to have no paintings in the future (3) undefined third step (4) PROFITS. Astute.

True to form, the foursome kill Veer and attempt to steal any paintings that remain in his house. In the process, however, they are sucked into said paintings. Veer's ghost wears a Burberry sweater and has his revenge Freddy Kruger-style in the world created by said paintings.

Where is Sunny Leone in all this, you say? Well, she's busy lending credence to the movie's tagline which reads "the search for love begins". She searches for her boyfriend's whereabouts while attempting to emote and participate in some of the worst choreographed sex scenes this side of Shakeela's filmography. This would be the right time to walk away for all of you. Save yourselves. Don't turn around and try to help me.

My brain also struggled to make sense of how a woman who has been lauded for her sexual acumen looked so uncomfortable in this movie with so much as a kissing scene. That to me is a bigger mystery than how this film turned out to be as bad as it is. However, I also tried to pay attention to all the other events unfolding on screen as people in my cinema hall vacated the premises at regular intervals (each of them soon realized that the movie wasn't an unabashed Sunny Leone-centred vehicle they could sink their teeth into, and did not at least have any semblance of a coherent story).

As she is being quickly relegated to being a secondary character in the film, the story of the comeuppance for the not-so-fearsome foursome of bad guys takes centrestage. And as each of them is eliminated more hilariously than the one before, you are left wondering if the writers of this one were writing for primary school students, or worse, are studying in one. As the movie finally winds to a close and your eyes have had enough of Arbaaz Khan's wooden performance, the film decides to punish you one last time by making you watch fireballs appear out of his paintings and consume a bad guy.

Don't forget. The movie proudly puts up the disclaimer that states that it is a work of imagination. Only, the film's imagination is so misplaced that it thinks Arbaaz Khan is its biggest selling point, and dares put his before that of Sunny Leone in the credits.

Indeed, Arbaaz Khan is no leading man. He is passable as a supporting actor, provided he works with a good director and on the right projects. And playing a reclusive genius is certainly not a part of his repertoire. Watching him mumble on woodenly about how important art is while brushing a few strokes on an easel with a DRY paintbrush is one of many examples at how this movie is a failure at every level.

At risk of sounding sexist, Sunny Leone is hired for one specific purpose, and it is not her acting prowess. And despite that, there is no chance in hell she's getting away unscathed after this. She's stuck in a film that thinks having her run in slow-mo is the best use of her appeal. As an add-on, has her cry incessantly and hilariously complain when Arbaaz Khan eats an ice-cream cone.

Not to be left too far behind is the film's over-the-top score. Leone's Raunak does an item number at one of the exhibitions her art gallery holds, and Dhinchak Pooja's music videos have better production values than that song does. The film has off-brand pieces of swelling music that came as part of the beginner's song sheet on the composer's keyboard. It desperately wants to make the audience feel stuff, but this music is punctuated by a dead-on-arrival script and performances that are already halfway to hell.

In keeping with this ineptitude, the camerawork and editing are at the level of those for TV serial levels. The (much-lauded in the film) paintings look like images downloaded from Google with Instagram filters applied to them. Then there are the hilariously CGed scene that has a transparent car going through the transparent Arbaaz, and all the instances of shots that are out-of-focus or un-centered, or straight-up crop out actors' faces. It is a film whose awfulness you have to see to believe.

By some stage in the movie, the few audiences left were looking at their phones instead of at a bikini-clad Sunny Leone on screen. As a filmmaker, if you can't make an audience member care about the main reason they came to see your film, you've really ****ed up.
Share. Save. Connect.
Tweet
TERA INTEZAAR SNAPSHOT 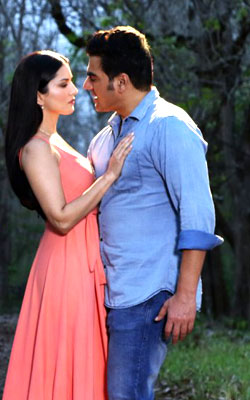 ADVERTISEMENT
This page was tagged for
Tera Intezaar hindi movie
Tera Intezaar reviews
release date
Arbaaz Khan, Sunny Leone
theatres list
Follow @fullhyderabad
Follow fullhyd.com on
About Hyderabad
The Hyderabad Community
Improve fullhyd.com
More
Our Other Local Guides
Our other sites
© Copyright 1999-2009 LRR Technologies (Hyderabad), Pvt Ltd. All rights reserved. fullhyd, fullhyderabad, Welcome To The Neighbourhood are trademarks of LRR Technologies (Hyderabad) Pvt Ltd. The textual, graphic, audio and audiovisual material in this site is protected by copyright law. You may not copy, distribute, or use this material except as necessary for your personal, non-commercial use. Any trademarks are the properties of their respective owners. More on Hyderabad, India. Jobs in Hyderabad.