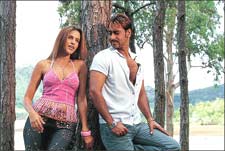 There are those who can't act. Those who can are made to shut up. Those who should be shut up are given all the lines. And those who should have no real business anywhere near filmmaking are either made to act or seated behind the camera. For those who still don't know that Qayamat is lifted from that classic action flick The Rock (1996), and if you're really, really interested, here are the highlights of the story.

Brothers Ali (Arbaaz Khan) and Abbas (Sanjay Kapoor) are the baaps of the illegal arms dealing cartel in Mumbai, and also totally nutzoid. Laila (Ishaa Koppikar) is the third wheel of the gang. Common girlfriend of both brothers, she can get their jammies in a jam with just a look and a smile.

Akram Sheikh (Suniel Shetty) is the CBI guy left eating brother-dust most of the time. Rahul Gupta (debutant Aashish Chowdhury) plays the dufus scientist (done so well by Nicholas Cage in the original) developing a deadly virus for a biological warfare scenario. The brothers take 200 odd highly bored-looking hostages on Elphinstone Island, in an abandoned prison complex, steal the virus and threaten to completely contaminate Mumbai. The high school hooligans have the petulant CM on speed dial and make his life miserable by demanding Rs. 1,500 crores and safe passage to Pakistan. 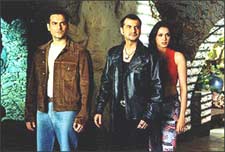 The last resort, according to Mr. Sheikh, is convict Rachit (Ajay Devgan) - ex-bumchum

of Ali and Abbas, and the only man to ever escape from the Alcatrazz-ish prison, thus knowing it inside out(frankly, it looked like the blind could practically see their way out of it). But he has lost his mind due to his love for Sapna (Neha Dhupia).

While he's being flown to the CBI HQ, the flashback reveals... well, most of Neha Dhupia. As usual, same crap, different movie. Rachit wants to quit a successful crime foursome for Sapna. The others are just a little bit ticked off, shit happens, murder follows and he's arrested, but the government will pardon all if he helps on this mission.

Akram Sheikh leads a team including Rachit and scientist Rahul into Elphinstone. Rachit, who's supposed to lead the way, seems too doped to give even half a hoot, so some bang bang later, it's just the convict and the hapless science dude. This is where the story rejoins the original and still falls flat. Of course, smokin' Dev-Gun proceeds to kick enough ass to save the day, and two or three more days - just for good measure.

Please remind me of the last time a Bollywood remake of a Hollywood classic made even half the waves as the original. Not one character in Qayamat has been built up decently. Arbaaz Khan and Sanjay Kapoor try, but they sadly still can't act. Ali and Abbas are supposed to be a chemical and a computer engineer respectively, but they don't look like they can even make a salt solution or save a file on MS Word properly.

Ishaa and Riya try too, but only reach desi Baywatch advertisement level. Suniel Shetty plays the Bharat Maa loving Indian Muslim thou-shalt-not-be-bought cop to the hilt. But his character's anti-Pak tirade really gets too much, and though it gets the frontbenchers cheering, it's in bad taste.

Ajay Devgan is the only one whose occasional appearances seem to keep the film's head bobbing above the surface of a sea of mediocrity. And what does the director do? Gives him all of 3 dialogues in the entire second half. Wah, ustad, wah. Debutant Aashish Chowdhury pulls it off quite well and Neha Dhupia is just... well... there. The action scenes are quite good, if a little too many.

ADVERTISEMENT
This page was tagged for
qiamat movie Pakistan
www.qyamathindimovie.com
Qayamat hindi movie
Qayamat reviews
release date
Follow @fullhyderabad
Follow fullhyd.com on
About Hyderabad
The Hyderabad Community
Improve fullhyd.com
More
Our Other Local Guides
Our other sites
© Copyright 1999-2009 LRR Technologies (Hyderabad), Pvt Ltd. All rights reserved. fullhyd, fullhyderabad, Welcome To The Neighbourhood are trademarks of LRR Technologies (Hyderabad) Pvt Ltd. The textual, graphic, audio and audiovisual material in this site is protected by copyright law. You may not copy, distribute, or use this material except as necessary for your personal, non-commercial use. Any trademarks are the properties of their respective owners. More on Hyderabad, India. Jobs in Hyderabad.